I don’t know Mark Cavendish personally. But, by observing his actions, I bet he has a confidence and self esteem problem. I know sprinters are a fickle bunch. But, his ying/yang deal is beyond just being a sprinter. He makes pretty brazen statements. He replies that he’ll go 85% instead of 80% if challenged by Tyler Farrar. Two days ago he somehow completely misses a right hand corner with less than 2km to left, goes straight and takes out Oscar Freire. Yesterday he gets a great leadout and finishes 12th, just two places ahead of Brent Brookwater.

Today he had it right wins. Then starts balling on the podium. It was his 11th Tour de France stage win. It was meaningful to him. So, if it’s so important to him to redeem himself, then he should probably just let his results do his talking and not put up this persona of “I don’t give a shit of what anyone else thinks”. Obviously it is important to him. 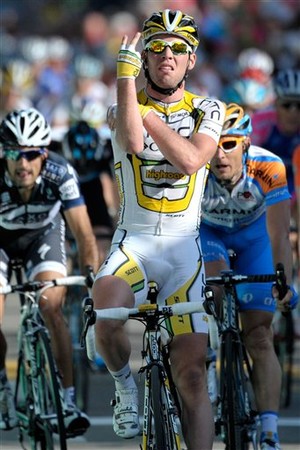 One of his better finish salutes.