Hope you are watching the Giro right now. Pretty exciting for so early in a Grand Tour. Riding in formation worked out pretty well for Liquigas today? When one falls, they all fall. Another negative for that tactic. I talked to Trudi. The road isn’t gravel. More like dirt with a thin layer of mud. Probably a lot like the conditions were at the UCI race in Battenkill . It is refreshing to see the race at the front being decided by individual performance and not relying on team tactics. Trudi is standing at 7 km with a spare bike for Cadel. And a set of wheels. Look for her. 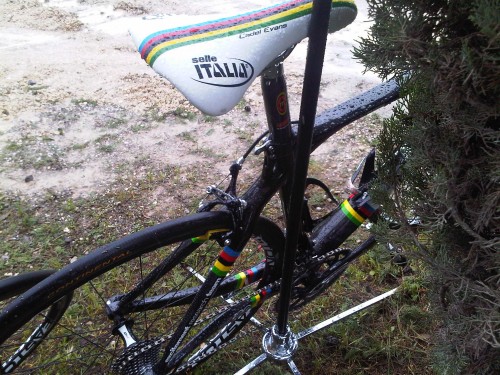 Below is a quote taken from Velonew.com.

• The BMC squad was well prepared for what proved to be a horrific stage, the worst director John Lelangue had seen in 20 years in the sport. “Winning the day wasn’t really the plan this morning, but there was a time bonus, so that helped,” Lelangue said. “I’m really proud of all the guys and the staff, who worked hard to prepare everything for today. We changed Cadel’s BMC at 120 km (as planned) to make sure we had good Easton wheels and we had people stationed on the dirt roads with another spare BMC and wheels.”

The BMC team does dot all it’s i’s and cross most of it’s t’s for sure. I hope the printed statement by John Leglangue, about it being the most horrific race he had seen in 20 years of racing, was taken out of context or something. 20 years is a lot of bike races. That was a good hard bike race, but probably not even in the top 10 or 20 of horrific/epic races I’ve seen or been a part of in the last 20 years. Not even close.

One thought on “White Giro”