Not much to report right now. The race was 110 miles with a big climb 25 miles from the finish. I guess the wind was the main factor today. Mainly tailwind for the first 50 miles and then pretty much headwind the last 60 or so. Blowing 25 mph or so. Our average speed was close to 30 mph for the first hour and a half. But, it wasn’t hard. Going through the first feed zone, a huge group formed off the front. Probably something like 30 plus guys. Cal-Giant had Sid Taberly in the move, but that wasn’t good for them, so they put their remaining 3 guys on the front to rotate. I thought it was a lost cause. Mainly because it was only 3 guys and that it was a 25mph headwind. But, the front group didn’t have the right mix either. After about an hour, close to the bottom of the climb, we were catching the “break”. Then the break split up. In the meantime, Fly V Australia started rotating some riders into the chase. We caught a group of 20 plus guys, but a big group, maybe 10+ guys were still away at 2 minutes at the top of the climb. The climb was virtually straight headwind so it was very easy to sit in.

There was a ton of stuff on the road and lots of flats. I flatted with about a km to go to the top of the climb. I got a pretty slow wheel change from SRAM. I knew it was going to be impossible to catch on without motor pacing. It was downhill into a strong headwind. The cars were so spread out. It was wrong. Finally, I got behind a COM car (ie. officials) and they brought me back up to the back of the caravan. But, the caravan was still way spread out. Riders were dropping back to get bottles and the cars weren’t staying tight. When they got bottles, they then would hold onto them at 50mph and blow by me. It wasn’t like they were holding on for a couple seconds. It was for like 30 seconds. If there aren’t any penalties, then there is something wrong. I saw a moto official writing down numbers when I was riding by myself. It wouldn’t normally matter much to me, but they were screwing up the caravan enough I didn’t have anyone to motor pace off of. I finally got back on. It was the by far the hardest part of the race for me. By miles.

Anyway, having no race radios screwed the information the field got up. And, the break rode smart. They were up 2 minutes. The chase got the gap down to 43 seconds with 20 km to go, but then the break ramped up the speed. We never slowed down, but they put more time on us. Fly V, United Healthcare and Cal-Giant all had riders rotating and there was no way we were going to catch the front group. I thought it was amazing with 10 km to go, all these teams started getting in line for the finish. We were sprinting for 10-15th place. That isn’t a place really. They should of been at the front chasing if they wanted to get a result. I don’t really know who was up front, so it is kind hard second guessing tactics. About 2 km out, there was the normal pileup. The hard uphill finish wasn’t so hard because of the headwind. I was in pretty good position, top ten, and kind of just stayed there until the last corner. I was just making sure there wasn’t any gaps opening up. Historically, the officials insert lots of time gaps at this finish. There is rumors that the break finished around 30 seconds ahead, but that isn’t set in stone. I think they had more personally. The results are going to take a long while I’d bet. Trying to figure out the riders involved in the crash isn’t going to be an easy task.

So, I don’t know who won. I hear it was a Fly V guy. I’m not sure why they were pulling, but maybe they didn’t want the time gaps big so they have more options the next couple days. I also don’t know who is winning the race. Tomorrow the course is much harder. I’m going to have to see the results before trying to guess how it might play out. I felt pretty great today, but that isn’t saying anything. Headwind climbing, anyone can feel good. You would have had to be riding pretty badly or have some pretty bad luck to not finish in the field today. Sorry I don’ have anything of substance here. But, with a tailwind/headwind race, it usually makes it more neutral. At least it wasn’t a field sprint. Finally.

I didn’t get the camera working. It looked like it might rain some, so I didn’t mess with it. And, I’m not sure how to adhere it to my bars. I don’t want to put it on my helmet. I might mess with it some tomorrow morning if I have time. I have to go glue a couple tires on now. It seems like I’m running out of time and I’m not really doing anything at all except riding 4 hours. Kind of weird how extra time disappears during stage races. 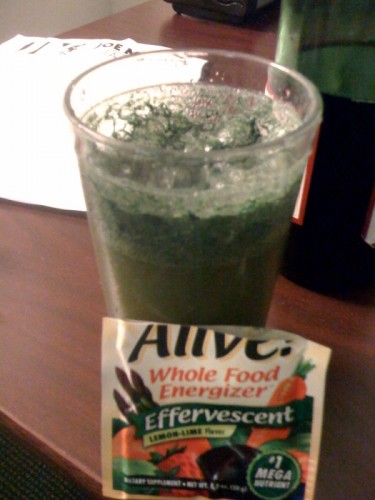 I drank a glass of this stuff after dinner for some reason. It didn't taste that bad. I was apprehensive because of the vegetables on the front with the lemon/lime flavor. It just seemed wrong. I did need to wash it down with the liquid in the bottle behind.

One thought on “Joe Martin Stage 2”