To continue the theme from yesterday about cyclist’s personalities, I was thinking about other circumstances that involved riders that I couldn’t comprehend. The first that comes to mind was from a while back, in the 90’s, with Missy Giove.

I was at Mt. Snow Vermont at the NORBA National. I think it was also a World Cup that year. We had done the cross country on Saturday and the downhill was on Sunday. Trudi was managing the Schwinn Team and Elladee Brown was riding for them. She finished the run and was 3rd. Missy was one of the last riders to start and she never came down. She had either flatted or crashed. So, Elladee was on the podium. A great result, plus, it was going to be pretty good bonus money from Schwinn. She had flight to catch that evening and had to go to the Albany airport. She asked me if I would get her prize check and make sure everything was okay. I said sure.

So, I went out for a short ride and came back in an hour or so. When I went to get the prize money, I was shocked to find that Elladee was 4th now. And Missy was 2nd. I had watched the race and Missy didn’t finish. I found the head official and was told that Missy had crashed badly on her run. Then she got up to get back on her bike and was riding the wrong direction on the course. A paramedic grabbed her and told her to stop. She tried to convince the paramedic to let her go, but she had landed on her face and was pretty messed up. Anyway, she went down to the start finish line and protested to the officials that she wasn’t allowed to continue and they gave her a reride. I had never heard of it before, but the results were final and there wasn’t anything I could do about it. I felt pretty badly that I’d let Elladee down.

The next morning, I had an early flight out of Albany myself. It is something like an hour and a half from Mt. Snow to the airport. So, I was down in the parking lot of the condo at 5 am loading up. Here comes Missy driving up soaking wet. I didn’t have a clue what she had been up to. She came over and in her normal amped Missy talk, started describing her all night cliff diving activity. I couldn’t take my eyes off her face. She had landed face first in the ground during the race and had broken off the majority of her front teeth. Like almost all of them. And it looked like she had be beaten to a pulp.

I have thought about this a few times over the years when I think that I am doing something hard core or just trying to get through a painful situation. When I fall and chip my teeth, it is super depressing. Let alone, knock all my teeth out. Here is Missy. She does just that very thing and then demands another ride in a downhill World Cup race, finishes 2nd, and then goes quarry diving all night. I’ll never get it. 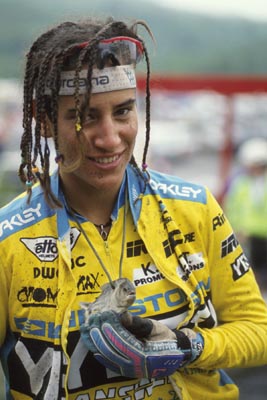 Missy with her dried Piranha. She always went big on and off the bike.