It has come to my attention that there is an on going discussion on Velonews.com about the recent decision to ban TT bikes at the Nature Valley Gran Prix next month. Click here to check it out.

My poor time trialing in 2008 was used as a reason that TT bikes shouldn’t be allowed. I missed the time cut by a few seconds. (I had/have never missed a time cut in my life in any other race, TT or road.)

I missed the time cut because I miscalculated how fast I had to ride to stay in the race. I didn’t have a TT bike (or wanted one) and it was obvious, that I wasn’t going to finish good in the time trial, so why ride hard. I had no idea that someone would average nearly 30 mph in those windy conditions with a 1 km headwind climb to the finish. It was my mistake.

From my perspective, I’m not going with the rational that it is a PRO level event and that if one is entered in this event, then they should be prepared to compete on a PRO level no matter what the cost.

Nature Valley is a great race. It is on the NRC calender. But, the NRC is a 2nd tier series now. I’m sorry to say it, but it’s true. USAC have created this PRO Tour series that is the premier series in the country. Look at the number of teams that race in Nature Valley, Joe Martin or any other NRC race that has the full 8 rider team full. Usually less than half of the teams in the race field a full team. And sometimes much less than that. It is not on the UCI calender. It is just a big regional/national event.

That aside, I totally support this new rule. I’m not going with the level the playing field rational. I’m going with it is stupid to make everyone bring 2 bikes to a race when one of the bikes is going to be used for less than 13 minutes. I stayed with a couple women two years ago that both flew with TT bikes to the race. $175 each way. That is $350 extra. Multiply that by the 100+ riders that fly to the event and you get to a pretty stupid number. It is the same reason that in Qatar at the start of the PRO season, riders have to do the TTT on their road bikes. The upside doesn’t justify the expense.

Dave LaPorte, race director of Nature Valley, is a great guy. And a smart guy. The sport needs more people like him involved. He doesn’t come from a cycling background. He is all about what makes the race better. For the sponsors, for the riders, and for the spectators. He listens to what people have to say and takes input seriously. He understands the importance of regional teams to the sport. And he and the race go out of their way to accommodate them. Enough said.

I say, let’s have a maximum of 6 riders on a team at any NRC race. Or any race that isn’t on the PRO Tour calender. This isn’t the Tour de France or Giro. It is weekend stage racing. At Joe Martin the past 5 years, every race has been a field sprint. That is 2 hard road races and 1 hard criterium times 5 years. That is 15 field sprints. The winner of the race is the winner of a 2 mile uphill time trial. Is that what our sport has come down to? 6 riders would have a much harder time controlling a field than 8. And it would make bike racing more interesting, once again. 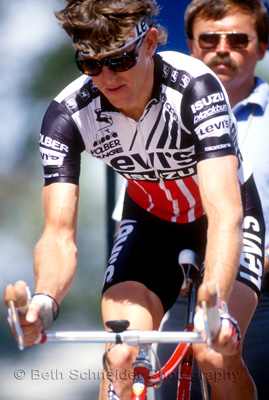 One of the last times I rode a TT bike was for the Levi's Team. I really look comfortable, huh? I can count on both hands how many times I've ridden them in my life.