The race was hard. 40 laps of less than a mile with a pretty descent hill. It drizzled before the start and then dried up. I knew the field was going to shatter early. I didn’t know how early. Less than 3 laps in there were only 8 of us left. The problem was that there were four guys from the Texas Roadhouse Team there.

In retrospect, I probably should of just attacked the break right then. At least two of the Roadhouse guys were on the ropes then, but I must of not been feeling that well either or I would of done it. Nick was with me, but he wasn’t having his best day either.

Long story short, the Roadhouse guys keep doing soft attacks. Eventually Pat Lemieux was off by himself. 4 of us rotated while the other 3 Roadhouse guys sat. I knew I wasn’t good from that point on. We eventually caught Pat, but I knew it was all going to start all over. I got off the front once with Adam Bergman and another Roadhouse guy. I probably should of just pulled then too. But, I didn’t.

So, with 10 laps to go we were all together. Pat jumped again and I figure if somebody was going to win, it might as well be him. He stayed with me a few weeks ago while racing a collegiate race in Kansas. He has been getting better and better the last couple years and has been paying his dues. So, Pat was gone and we all just rode slow. Towards the end, two Mercy/Specialized guys came up.

I tried to lead Nick out, but he lost my wheel and so I ended up just pulling Bergman and Co. off the front. They ended up 1st, 2nd and 3rd. I was 4th and Nick 5th. It didn’t really matter to me after 1st, so it was fine. Pat was pretty glad to have won. He deserved the win. He was riding pretty well.

I wasn’t going that bad. It just felt bad. It was the first criterium I’ve done this season and that is always hard. Probably close to more jumps than I’ve done the whole season combined. It’s hard to get into that mindset so quickly.

So, finally back home. There nothing this weekend and then Joe Martin starts the end of the next week. That should be enlightening.

Trudi had a week between the end of the Giro del Trentino and the Giro d’Italia, so she bought a plane ticket on Sunday and is getting back this afternoon. I’m sure she is going to sleep most of the week. That job is hard. 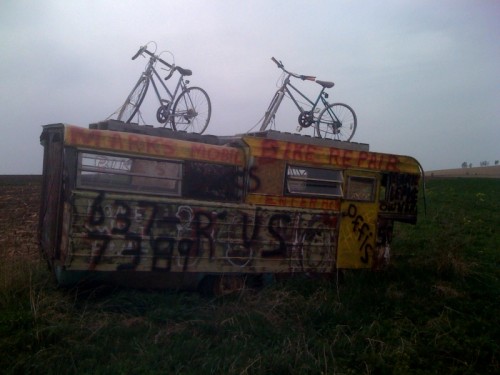 Mobile bike repair in the middle of nowhere in Southern Wisconsin. 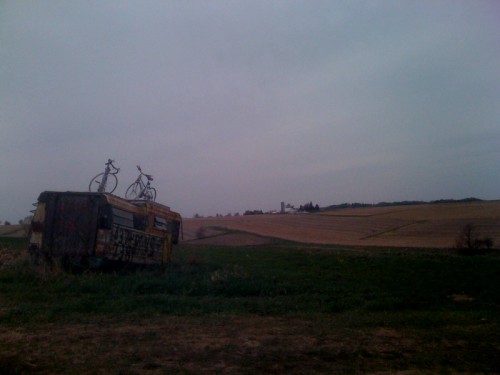 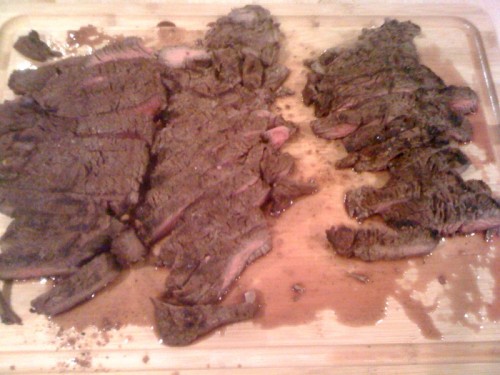 Post road race, pre-criterium, dinner courtesy of Jeff Bradley. He stood out in the pouring rain to grill this. The night before we had pasta with venison that Jeff personally attained hunting with a bow. He's a meat and potatoes type guy for sure.