I’d been hanging out in New York for a week waiting for the “real” Tour of Battenkill. Personally, I think they should run the 2500 rider race on Saturday and then the UCI Pro race on Sunday. I’m sure Dieter and Co. have a good reason to do it on two separate weekends, but if they could work out the logistics, it would be a bigger event together.

This week it was 200km. Two laps of 100km. Same dirt. Same hills. Nothing new from the previous race. Other than the temperature and precipitation. It was going to rain. Just when was the question. It was in the upper 40’s. Dry at the start. I started with arm warmers and bare/oiled legs. I’m not much into wet knee or leg warmers.

Anyway, the race started pretty fast. I was not having the day I had a week earlier. I was not warm. The pedals weren’t going over easily. If you would of asked me anytime during the 1st hour if I was going to finish I would of told you “absolutely not”. Just after the second feed about 40 miles into the race, it started raining. That was right before the longest dirt section. The dirt didn’t turn to mud. It stayed pretty hard. The problem was a thick, clay spray coming off the wheels. It was nearly blinding. Much worse than a cross race. I pulled my glasses down to shield the spray and just looked over the top.

It keep raining and after the final climb at the end of the lap, there is a 55 mph descent. That was the worst. I’d put on all the clothing I had with me and I was still freezing. The wind chill was nuts. A big group got away on the descent and we just cruised for the next 10 miles. Not good for staying warm. Everyone was freezing. Shaking their hands, ect. I was frozen. On the Juniper climb I couldn’t really feel my arms at all. Not to mention my fingers. I guess the officials pulled something like 100 riders for being more than 5% behind after one lap. I eventually just took my gloves off because they were so wet and I couldn’t feel my fingers.

Eventually Jamis put all their guys at the front and it started rolling along pretty good again. They were setting a super fast pace. They caught the break about 30 miles later. Going into the 2nd feed with about 20 miles to go, I was feeling pretty good finally. I had been climbing pretty mediocre most of the race, but the previous couple climbs I’d felt much better. I tried to get into a couple moves right before the feed. I could sense it was going to be here that the winning move went. I was with a group of 8 or so with Floyd Landis (Bahati), but we didn’t really go anywhere. At the end of the feed, Floyd launched solo again. No one followed. Caleb Fairly (Holowesko Partners/Garmin U23 Team) jumped up to Floyd pretty quickly. I was at the front but was boxed in. I knew it was done. Another small group went less than a km later. Soon there was a bunch guys from the teams of the riders off the front riding slow. Mainly the Fly V Australia Team. They were all riding really strong on the climbs and I guess they thought they had their best guy for the day up the road.

I was still feeling pretty good. At least I was warm. The next couple climbs were easy. A few guys were getting popped from the conditions mainly. Not the pace. I was looking forward to climbing Stage Road, the final dirt climb, hard. The top is less than 5 miles from the finish.

We had a pretty big group hit the bottom of the climb. I was towards the front in the top ten. I went up the first pitch pretty good and then realized I wasn’t going as good as I was 10 minutes earlier. I lost a few places on a false flat before the 2nd pitch. I barely made it over in the group. I was hurt. I think Kristian House (Ralpha) and a few other guys that didn’t make it over in the group caught back on during the descent, so maybe it wasn’t so important staying in the front. It really surprised me how quickly I lost my shit.

So, a big field sprint for 5th. I was fine and just jacked it up. The last corner is 400 meters from the finish. You have to be in good position going into the corner. I had done it just a week earlier. Type 1 was doing a leadout for Ken Hanson, but it wasn’t going that fast. I was on the right about 10 guys back The wind from the left. About a 100 meters before the last corner I was jumping up the right to go through the corner at the front when Will Dugan or some other Type 1 guy peeled off the front to the right and coasted. There should of been plenty of room, but some homeowner had pruned his trees and had piles of branches in the road sticking out 5 feet or so. I had to get super heavy on my brakes and lost 10 places. I was buried. I finished 19th on the day.

My main observations of the race-Everyone was cold. Fly V was riding the best as a team and didn’t maximize their results. The Jamis guys did the most work of anyone in the race for the least return. Lack of radios definitely changed the results. I’m surprised that there weren’t a ton of broken chains. When it dried up the last 2/3 a lap, everyone’s drivetrain was completely dry/contaminated and very noisy. There are a lot of guys riding pretty fast right now. Or maybe I haven’t raced enough yet. And finally, Garmin’s U23 team seemed to be riding better than the Livestrong/Trek U23 guys this weekend. Winning this race was good for them.

Battenkill is a great event. The day was epic. The race was winnable. But, I would have had to have been extremely lucky for that to occur. It is kind of weird riding solo at a race like this. I wasn’t technically riding solo. Jared Nieters, owner of Haymarket Bicycles, had a whole gang up from the D.C. area and was nice enough to let me race with them. But, realistically, I was there on my own. I carried everything I needed. The mental stress with conditions like that was not easy to deal with. I was doing the race mainly for myself. I said last week, I don’t like doing do over races after I had a great day the week before. But, now 24 hours later, I’m okay with it. I got a bit stale waiting around the week. I’d do that differently next time. I wasn’t bad. I just wasn’t as good as the week before.

Now I’m sitting in Wisconsin. I drove the 1200 miles back to the midwest. Bromont needs to run in the woods some. I’m going to ride a couple races in Iowa City this weekend. Forecast is for rain. 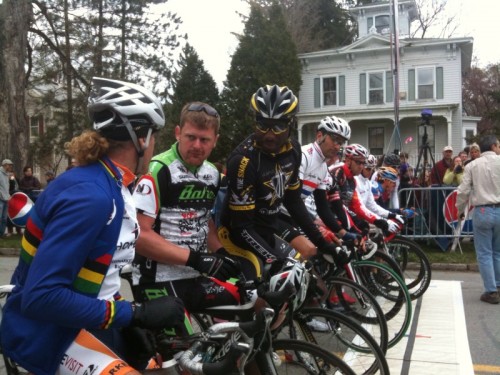 There must of been something interesting going on. I'm not sure why Justin (Livestrong/Trek) even started this race. 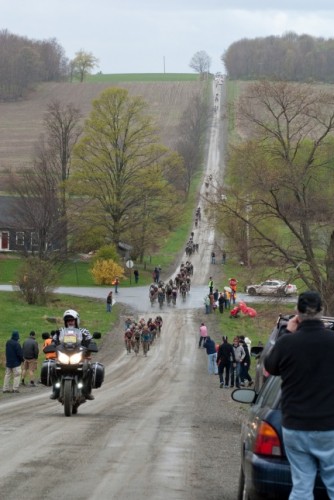 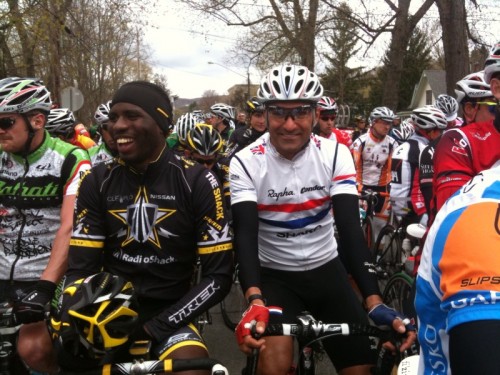 Kristian House, all smiles, in his British National Champion jersey. 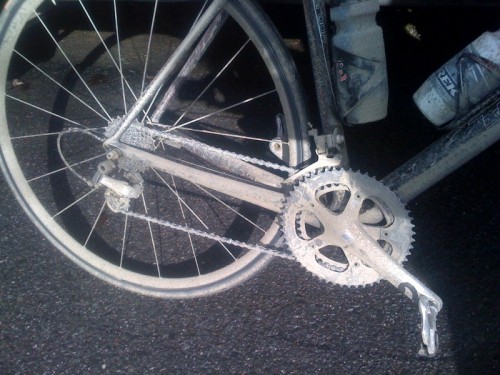 My drivetrain was hurt. 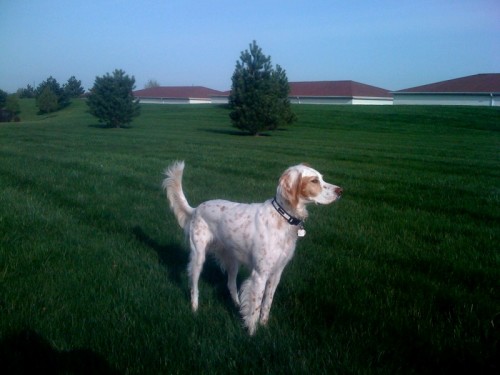 Bromont has been a good travelling companion the last 2 weeks. Now he gets to go romp in the Northern Wisconsin woods for abit.