Pace Bend wasn’t the easy roll around race that it has been in the past, mainly because it was breeze/windy. And pretty hot for February. I’m not sure how fast the wind was blowing or from what direction, but it was windy enough to make the race hard. The Pace Bend race is 13 laps of a 6.25 mile course. There are two medium hills (big ring) and the rest just rolls. The start isn’t at the start line and a few guys, including Kristian House, missed the start. That was a drag for him. And, for the field. It’s amazing what the difference of one strong rider can make at an early season difficult race. I think it changed the outcome of the race a lot.

The race started pretty fast right from the start. I wasn’t feeling that stellar, but that was to be expected. Small groups of guys got away and there was a lot of jumping. The gutter riding wasn’t too bad, but it did chip away at whatever energy you thought you had. Finally after about 1/2 the race a pretty big group of 8 or so guys got away. At that point I was thinking, “shit, we’ve only gone halfway and I feel like this”. The respite was that THSJ went to the front for the next 3 laps and set a nice tempo. For 20 miles. Then there were only 20 miles to race left. A bunch of guys were watching by this point. The field seemed pretty small, but there were still 40 or so riders left, I think. With 2 laps to go it was all back together and on the backside hill it split again and I missed it. That was from not thinking, not from not being able to. I thought it was all over. I made a feeble attempt of riding at the front, but it was fruitless. Somehow, our group managed to go fast enough and the front group screwed around enough that just one lap later, 1/2 lap to go, it all came back together at the bottom of the same hill.

The break drilled it up the hill and I was way out of position once more. I’m not sure what that was all about, but I wasn’t about to miss the move again just 4 miles from the finish. I rode up the hill pretty steady and at the top put it in my 11 and sprinted for a km or so. Guys were blowing to pieces and going very slowly. I caught on the back of the the 10 rider groupjust before the last 90 degree right downhill just a couple miles from the finish line.

This is where I kind of blew it. I never had a good game plan going. Heath Blackgrove and Patrick McCarty were doing nearly all the work at the front for their guys. I was still sitting towards the back. I was trying to recover from my effort and it wasn’t working that great. I was trying to figure a way to win and nothing occurred to me. So I decided I should start the sprint on Josh again because I would be assured of 2nd if that were the case. I got a little screwed up because it is very curvy going around the lake and most of the corners look alike. The last curve came up one before I expected, but it wasn’t like yesterday. It was an uphill sprint that was much harder. Josh was 4 guys ahead of me and when I moved out into the wind to get to him, he jumped. Way earlier than I expected. I didn’t even try. He had JT on his wheel and there was already a few bike lengths between those two and us. So, I waited and started sprinting a 100 meters later. I was in the right gear at the time, but it turned into the wrong gear pretty quickly. It is amazing how fast you can go from good to bad early season. So, I got up to 3rd with 30 meters to go, but got passed before the line by a charging Kris French. He was riding pretty good, so he deserved the result.

I woke up this morning feeling like I’d raced a pretty brutal MTB race. I hadn’t raced in over 4 months. I hadn’t done an effort over 4 months. I wasn’t going to win either of those races if I was with Josh at the end. And that was nearly a given. So, it is mildly irrelevant if I finished 2nd both days or 6th and 4th. It’s all early season fitness. It was very nice getting some longer, fast miles in. Racing out of shape is very painful. Hopefully this will help not having to suffer like this too much longer.

It is not stellar weather in Austin this week. It is predicted to snow here on Tuesday, so us Kansans are going to ride all day today. I’m usually okay on Monday and beat on Tuesday anyway, so it will probably work out for the best. 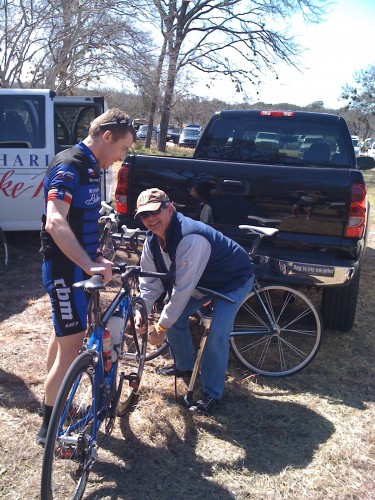 Mr. Richardson Bike Mart, Jimmy Hoyt, down in the trenches, pumping the tires up for his riders. I've know Jimmy forever, back to the Schwinn days. It was nice to catch up some. 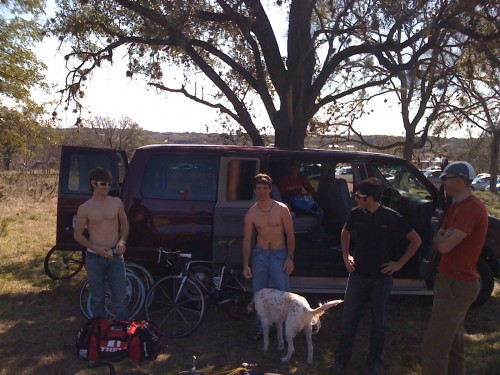 Shirtless in February and worried before the race that it's too hot. It's such a hard life. 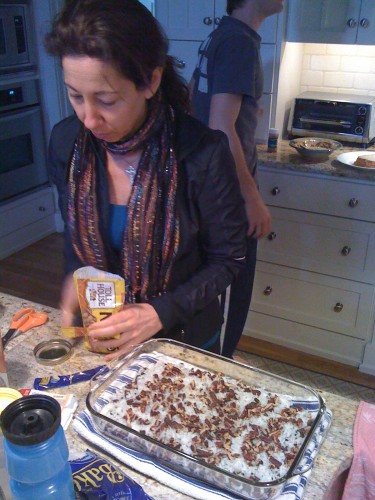 Maureen making killer bars for post race consumption. She thought we might need MORE calories, so she added an extra bag of butterscotch chips. 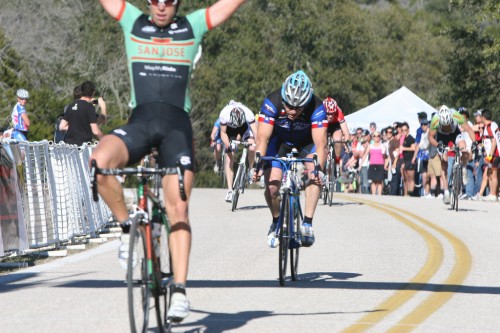 Getting smeared in the sprint.