I’ve been fascinated with hummingbirds for a long time. I had a bike riding experience that left a imprint that never left.

One of the first years I rode the Coor’s Race in Colorado, I had driven to Boulder to train and acclimate. Foolishly, I decided to ride the complete Boulder Mountain Road Race course plus an extra loop the first day there. It was super hot and the ride was nearly 125 miles with tons and tons of climbing. Anyway, I’d ridden about 90 miles or so and had only gotten to Ward and was done. I felt cramps coming on. Ward was a super small mining town with virtually nothing there. But, there was a small cafe/grocery store.

I bought a Gatorade and a candy bar. My legs were twitching like they were firing on their own. I drank the full Gatorade and instantly virtually every muscle in my body started twitching. I was cramping in my hands, my forearms, my feet, everywhere. It was so weird. And painful. Must have been some mineral imbalance. Anyway, I didn’t even think of getting on my bike for a while. I was sitting out on a deck in front of the store and the whole time there were dozens of hummingbirds doing aerial combat. It was nuts. The speed, the numbers, the sounds, the colors. Nothing I’d ever witnessed before. Or since. I could have stayed there all afternoon and watched. It was fascinating. It made the cramps seem inconsequential.

Anyway, I was watching a show on PBS on Hummingbirds last week. It was pretty unbelievable. Hummingbird hearts beat between 600 and 1200 beats per minute when they are awake. That is 10 to 20 beats per second. But, when they sleep, their heart rates decrease to the mid 30’s. That would be like a normal human’s heart rate lowering to 4 bpm sleeping. Or, a cyclist’s heart rate going down to 2 or so. Lot of other fascinating stuff too. The show was great. Super slow motion of hummingbirds in flight. Made me reminisce of that ride in the mountains. 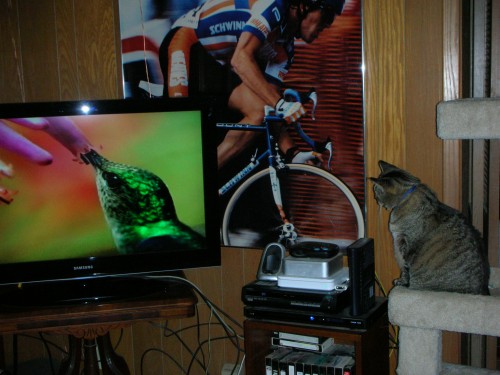 Naomi was just as interested in the hummingbirds as I was. She watched nearly the whole show with me.

This box is obsolete. It’s about time!!! 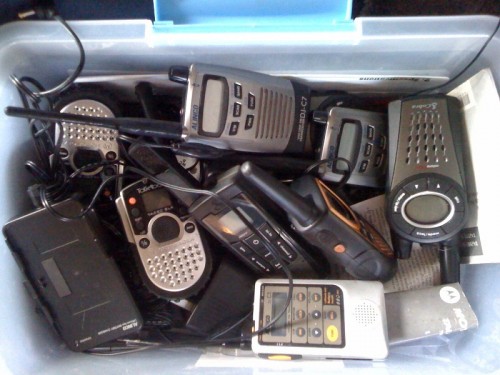 A friend of mine, Nick Frey, who is currently riding for Jamis/Sutter Home professional team, has started a business making bamboo frames. He’s in production now. You should check out his website- Boobicycles.com. It’s not fully up and running, but I’m sure it will be soon. The frames are beautiful. 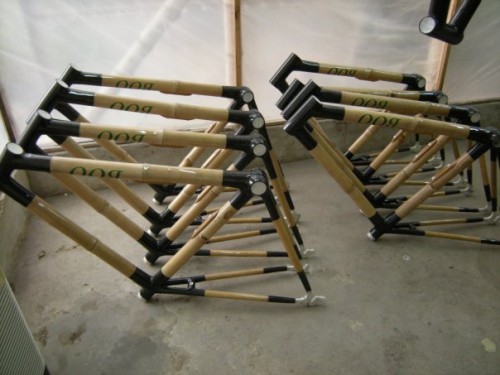 Got in the van this afternoon with Bromont and headed South. It snowed 4 more inches of wet snotty snow and I was sick of it. Plus, there are some dehumidifiers down this way that want to be moved to Kansas. And, the “horrible” Texas weather looks to be clearing up. It should be in the 60’s this weekend in Austin. There are 2 races in Austin this weekend, but I’ll have to think about it (or better yet, not think about it) to figure out if I have any desire to suffer that much this early. It’s nearly 700 miles door to door, but the drive isn’t bad. It all depends what time you hit Oklahoma City and Dallas/Fort Worth. I didn’t leave until after 2pm, so it wasn’t an issue. I brought my MTB with me just in case I feel the urge and am physically able. I took the photo below somewhere south of OKC. They was cruising down I-35 at about 80mph. He (the dog) had a pretty good view and was out of the weather. 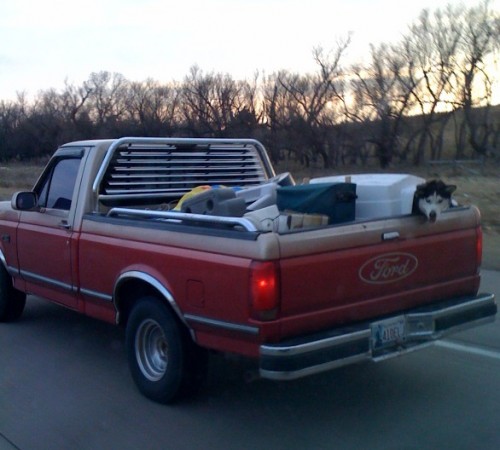 The weather in Austin hasn’t been much better than the rest of the midwest, but bad weather here is nice weather in most other places. Today was nearly 60 degrees. I got on my bike to go watch a bike race. I knew it wasn’t going to be much better than watching cyclo-x Nationals. And, it wasn’t. I made the mistake of getting there right before the start. Like 5 minutes. In retrospect, I’m glad I didn’t have a helmet. I would have more than likely raced. The course was wide open. The field of 1-2’s was nearly 80 guys. Seemed like a good race to sit in and do nothing. Maybe tomorrow. Instead I rode over 5 hours. I ended up riding until dark. I got kind of got lost a bit and did a few more hills than I’d planned.

Riding around Austin is super interesting. The architecture is a weird mix of stone and metal, old and new. I love it. And, especially when you add in the terrain. Riding west into the Hill Country is great. Too much traffic, but that is the norm everywhere “cool”. I don’t mind riding in traffic if I’m on my own, in a group it is a different story, of course.

Tomorrow there is another race. I’m not sure if I’m going to ride all day or go to the race. Guess I’ll decide when I wake up. I don’t have enough miles to race, but that hasn’t stopped me before. All I know is that it is super nice riding with nothing over my knees. 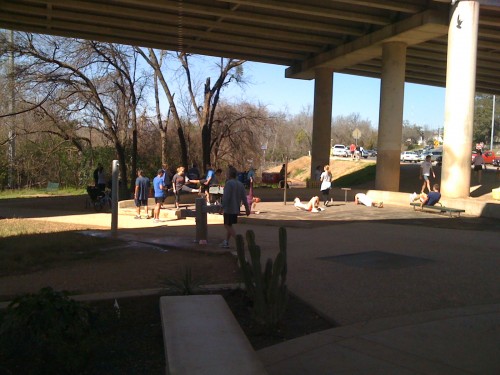 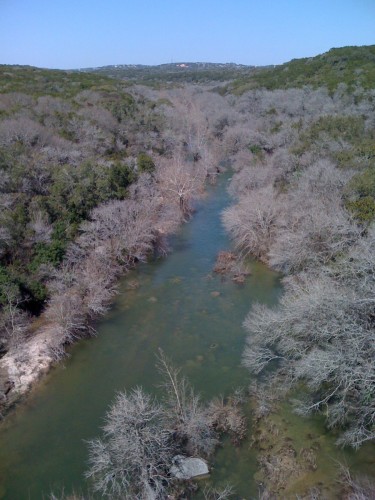 There has been a ton of rain here this winter. Very good for the drought conditions. 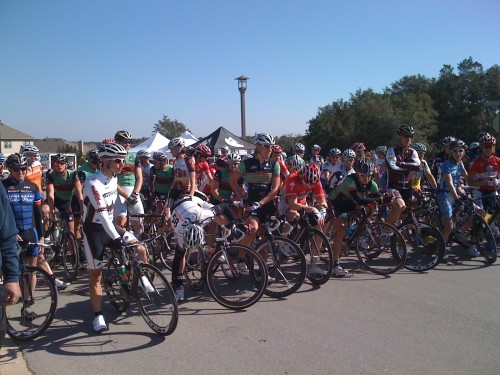 The road racing scene is healthy in Texas. 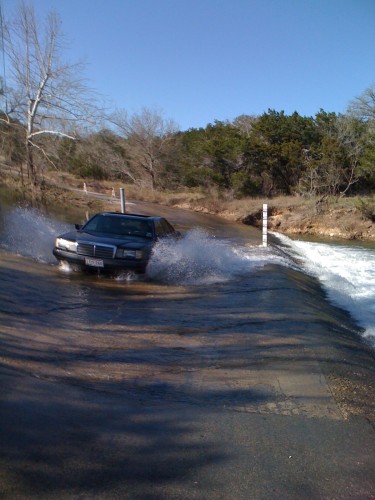 Nearly had to get my feet wet at this low water crossing.

Yesterday I watched the Super Bowl with Maureen. She is from Charleston, SC, thus it was mandatory she was a Saints fan. Actually, she likes the name of the team, so she was rooting for them. She cooked up jambalaya. On rice. With bourbon. And lemon. It was awesome. I rode through Westlake Hills today post Superbowl. Hometown of Drew Brees. It’s just on the other side of the river up the hill. Just a suburb of Austin really. 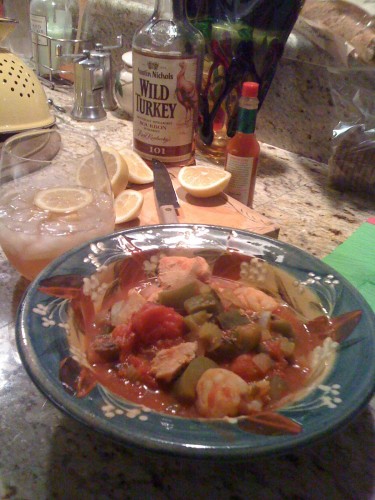 It rained all day here in Austin. It got up to the lower 60’s, which is the norm nowadays, but it was wet most of the day. I finally got out later in the afternoon and got a couple hilly hours in. Not a bad day considering how it was looking at noon. I did a loop out in the hill country west and came back through town along the water through the nice neighborhoods. The stonework is amazing. There are 1000’s of houses here covered completely in stone. I love it.

Tomorrow I’m going out with the locals for a long day. But, tonight I have my KU shirt on. KU basketball vs. Texas while I’m in Austin. Should be fun. 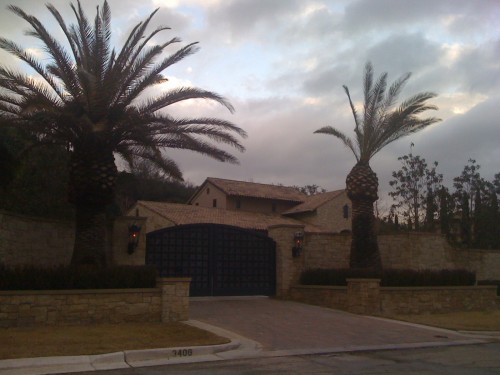 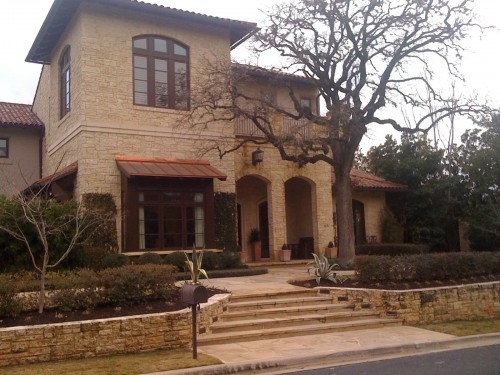 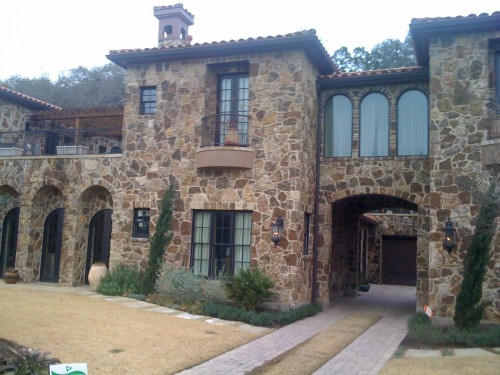 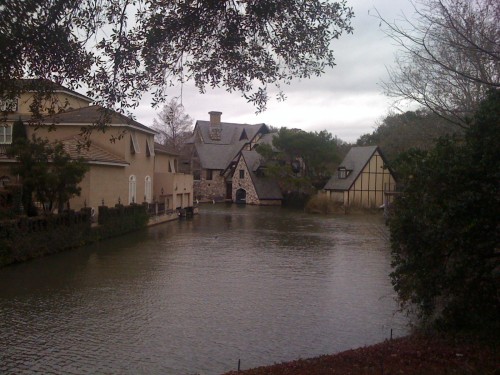 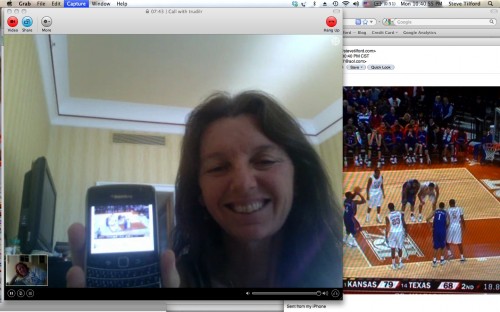 A screen shot of skyping with Trudi in Qatar. She is showing me her Blackberry with the email of the KU score on it live. It is 8am there and 11pm here.

I have been playing around abit with those big blowup balls that people use to substitute for weights. I always thought it was kind of silly. But, now I don’t think it’s that silly. I do think that most of the movements that you do on one of these balls are not natural. But, that doesn’t mean they aren’t beneficial to you. Anyway, Maureen has a whole room dedicated to them. And it’s only a few short steps away from where I’m staying, so I don’t really have much of an excuse to not go in and use them. It’s hard enough getting in shape this time of the year without torturing yourself with these balance movements. But, I’m doing it. We’ll see if it pays dividends sometime down the road I guess. 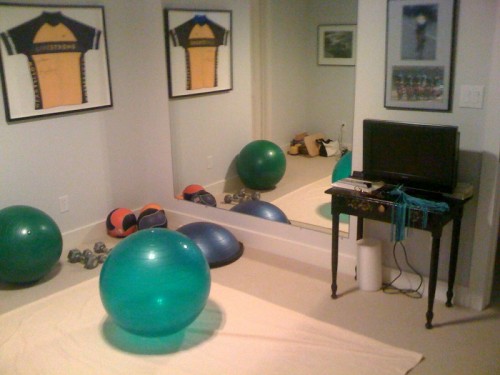 Everything you wish for and more. 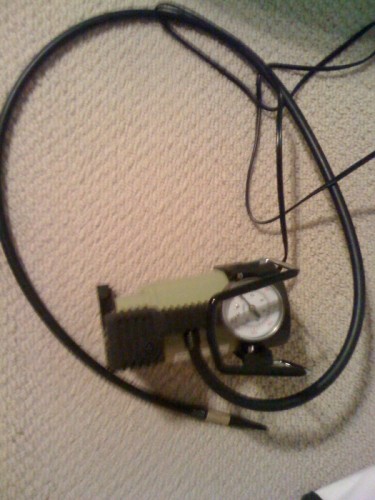 Even a pump specifically for blowing up the balls.