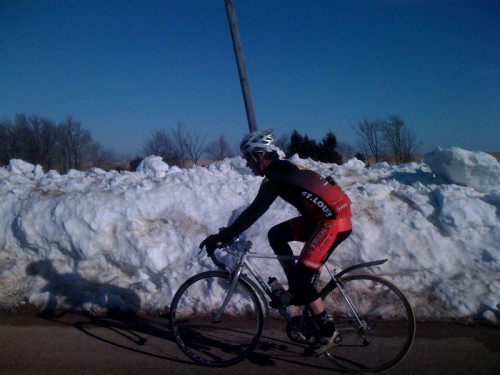 The plowed piles of snow in the country are nearly as high as Bill.

Yesterday was my first ride of the year. That has to be a record of some sorts. The 13th of January. My first ride has been later some years, but that is when I was off somewhere skiing or playing in the sun and didn’t have a bicycle around. This year it is because of the incredible amount of snow and my lack of effort.

So yesterday in the morning, I did one of the most unrewarding jobs I can imagine. I shoveled stuff from one dumpster I had already filled to another. It seems that there is a weight limit to what a front loading trash truck can pick up and I exceeded it by a ways. So, they brought me over another dumpster and placed it by the first one and I had to shovel half the stuff out of the one I had already loaded to lighten the load. It was a frozen mess of floor tiles, prehung ceiling tiles and plaster. The shovel of choice was a roofing shovel. That isn’t a very efficient way to dig, but it was more of a combination of digging and chopping. It took me over 3 hours. Thankless. They never got by to pick it up, so I don’t know if it worked. I do need to lift some weights this year, but it will be impossible to do as many reps as I did in the dumpster. Probably 10,000 or so.

After that I met Bill to ride. He had been going out for a few days. He has fenders on his old cross bike. I just rode my normal road bike. The main streets in town are clear, just super wet. The neighborhoods are a mess. The county roads are fine. Dry pretty much. It was 3 miles in town before dry roads. So, I was going to be riding all day with a wet ass. It was expected.

We only rode 2 hours. It was nearly 40 and pretty windy. But sunny. I overdressed. It is amazing how it takes a couple days of riding in the winter to get used to what to wear again. At least it amazes me. I hate being over dressed. I don’t like being under dressed either. But, it’s hard to be so under dressed that a wind jacket doesn’t fix it.

My first encounter with an irate driver occurred exactly 5 miles into the first ride of the year. He was all pissed we were riding two abreast. He went up the road a 1/4 mile and pulled into his driveway and walked across the road to get his mail. A 40 something year old guy wearing a Nascar hat. We rode up and he instantly started shouting swear words. Then he did something unusual. He leaned over to make a snowball. I told him to put the snow down. He said “what are you going to do about it.” I told him to try it and we’d find out. I was really thinking, “I’m going to beat the shit out of you and then call the police”, but I never had to say or do it. It was obvious we weren’t going to get anywhere reasoning with the guy, so we rode off.

Hopefully that wasn’t a sign of how this year is going to go. It isn’t very often we get hassled around Topeka. Hardly ever. Lawrence is different, but around it is Topeka usually fine. It is amazing how incredulous and mean a person can be when he or she thinks the law is being broken. I used to carry a copy of the Kansas Law that states that bicycles have the use of the lane and that it is legal to ride two abreast. That would usually calm a situation down if it ever got far enough along to actually be talking one on one. I guess I should print up the law again and put it back in my peanut butter jar (if you don’t use one, a peanut butter jar is perfect for carrying your spare tube, tools, etc. It fits perfectly in a bottle cage and keeps everything dry).

Anyway, nothing more exciting happened the rest of the ride. Bill kind of ran out of juice a little towards the end. He was on his 3rd or 4th day, so it didn’t surprise me. I felt okay. I took my gloves off the last few miles. It is so nice and comforting feeling the levers for the first time in a while. It is one of those things that would be hard to explain to someone that doesn’t ride a lot. I have a hot water spigot in my garage I put it in a few years back. It is mandatory to spray your bike off after a ride like that. With so much salt, sand and crud on the road, it would be a death sentence to any bike in less than a month if you didn’t. Hot water does a so much better job than cold. It sometimes seems a little wasteful, but it works really well. 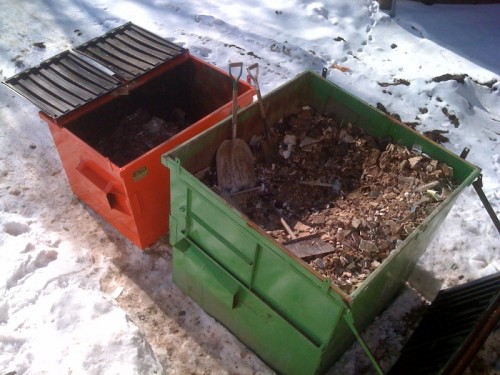 Overhead view of a thankless job. It is hard to believe that the orange dumpster is half the size of the green one. 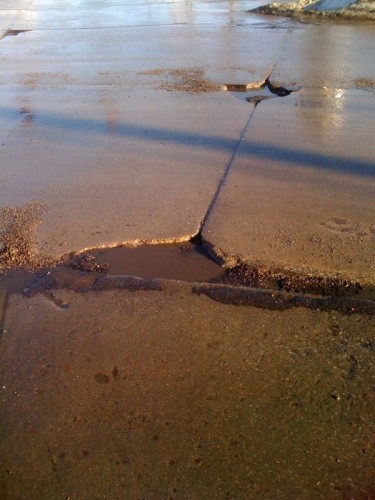 The streets in town have a million pot holes. It was a hard winter for roads here in Kansas.

One thought on “1st Ride”