What they left out at the end of those questions was, “for the rest of your life”. That changes up the question enormously. I do like to do just about anything. Making pizzas, delivering newspapers, roofing houses, digging ditches. But, I don’t like doing these things for a long duration. They don’t keep me captive intellectually.

I’ve done a bunch of different shitty jobs this winter. And I have a bunch more to complete. Jobs I don’t want to repeat. At least for the duration involved. All of them are interesting for awhile.

Cycling is different. Much different. The more you do it, the more intellectually interesting it becomes. I have said it a million times and I’ll state it here again. I have never raced a race that I didn’t learn something in. And most of the time I learned a lot. Even now. I’ve probably raced something like 2000+ races in my life. That is not an exaggeration. That is a crazy big number. Just looking at it amazes me. That would be like racing everyday of the year for nearly 6 years straight. You’d think that after doing something everyday of the week and every week of the year for 6 years, it would become pretty boring. Not hardly. The key is that it is constantly changing up. And, it never has the same results. It is very similar to chaos theory. Very minute changes occur so the outcome never seems predictable. Like the chaos theory suggests, it can be difficult to tell from observations whether the results are random or chaotic. Many races’ outcomes seem to be predestined. But, that is only after the fact. That is what I love about the sport.

Cycling in the US has been evolving recently. Probably because of the influence of foreign riders. And television. A lot of times, after I observe someone or some team make a bonehead move or rides silly, I’ll comment that they’ve been watching too much Tour de France TV. Many of the “tactics” that the US “PRO” teams seem to have adopted does not make any racing sense here. But, they don’t seem to get it because they’ve never known different. That is okay, it just makes guys like me look better than we really are. It is one of those amusing things that keeps me intellectually young in the sport.

Cycling is hardly ever a job. And when it is, it could never be classified as a shitty one. 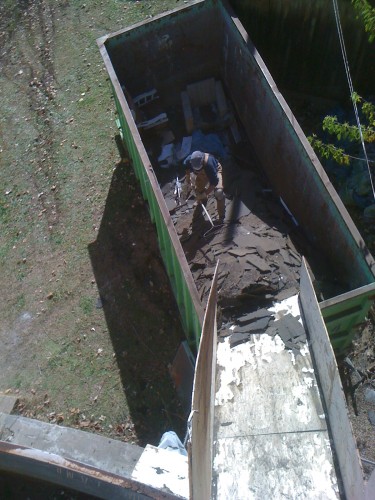 Even redistributing debris in a dumpster has its moments, as Michael can attest to.