You know that saying-It is just like riding a bike, you never forget? I’m not sure if I agree with that. I was riding indoors yesterday. Twice actually. And either it wasn’t at all like riding a bike or I did forget. I nearly needed to get a tape measure to set my seat position. I changed it at least a cm between riding in the morning and riding in the evening. I can usually feel if my seat is off even less than that.

I have a normal pedaling style that comes naturally, usually. When I was pedaling during the first hour, I found myself having to consciously think about pushing down and pulling up. It was almost like when I ski. I needed to concentrate on each pedal revolution. That’s not right. It was annoying and unsettling.

I started thinking that perhaps I had regressed to what I think most triathletes feel when riding. Or, someone who has never had the luxury to spend most of their lives on their bikes. It is so easy for me to glance at someone riding down the road and tell how much he is in tune with his bike. It’s as easy to me as telling what color jersey he is wearing. I can tell you if a guy is a “professional” cyclist just by the way he carries a bicycle up stairs. Or wheels it across a driveway. This might even be easier than when someone is riding.

I admit, this has been the longest time period that I haven’t ridden in a very, very long time. But, I didn’t feel anywhere near “right” yesterday riding. At least the first time. It got a bit more familiar the second hour, but not familiar enough.

This has been the worst winter weather in Kansas for as long as I can remember. There are very few times here that it is nearly impossible to ride outdoors. This is one of them. And, by the way the forecast looks, it’s going to staying this way for at least another week. I’m sure after a few more hours on the ergometer, it’s going to start feeling “right”. Then I’m going to go get on my bike and it’s going to feel all wrong again. Go figure. 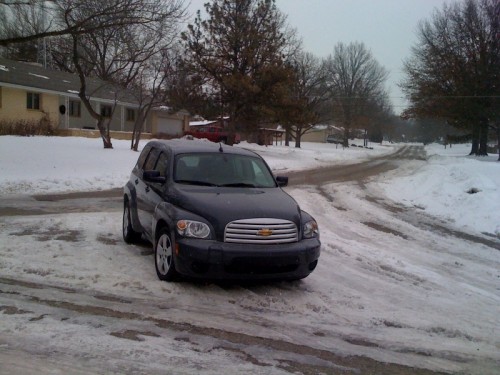 Tom Schuler's rental car parked in front of my house. Maybe this is how they teach you to do it in Wisconsin. My street is one of the clearer streets here in Topeka.