I had a big scare yesterday. The radio that I’ve been using at every construction site, bike build, virtually any project outside for the last 25 years, quit working. It has been abused more than I’ve abuse myself, by far.

I got the radio when I was riding for the National Team in Tour of Chile back in the early 80’s. It was a great prize. The race was super memorable. After flying forever to Santiago, Chile, we got on a train that was identical to the train in the TV show the The Wild Wild West. It had sleeper cars that had pullout beds covered in velour. It was a day or two on the train, I don’t quite remember. All the way to the most southern tip of Chile. Then, we raced 10 days back up to Santiago. Over 1000 miles, which at the time seemed like a lot. Upon getting to the first hotel, we realized that everyone was going to be staying in the same room a lot of the time. We wished we would of brought a “boom box”.

The first stage was a circuit race. We were all riding pretty good and won a bunch of the special primes. One of these was the Chilean radio. It was so fortuitous. We couldn’t believe our luck. I’m sure the coaches hated it though.

Anyway, like I said before, I had a ton of life memories from this race. I ended up 3rd overall. I was tackled off my bike from behind while jumping a small curb entering a velodrome 200 meters from the finish on the final stage by the overall race winner, who was falling. I had a police officer push the barrel of a machine gun into my stomach while cocking it. I learned that the best way not to get dropped climbing when you’re about ready to get shelled by guys that are just as red-lined as you is to attack them so everyone is completely gassed. I exchanged all our prize money in an abandoned skyscraper in downtown Santiago with mobsters. And I ended up flying back to the US with the radio.

I got a plug in Miami that allows me to plug it into US sockets. I’ve never lost the plug. And never killed the radio. The recent project is going to take it to its limits though. It has been left outside and been rained on inside. Dropped down the stairs. Good news… it wasn’t truly done for. Just a plug contact issue. I love this radio. If this radio was a bike racer, it would be Sean Kelly. 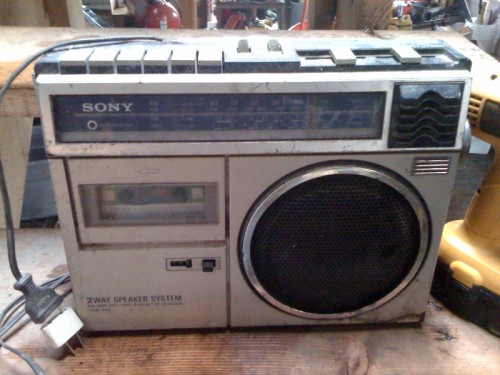