If you would have told me on Friday that I was going to finish 3rd in Chequamegon and be in contention to win coming into Telemark, I would have been happy. But, Saturday, after the race, I’m bummed with that very result. It is funny how your expectations and outcome differ.

I knew before the start that something was different. I rode out to the Birkie Trail and rode the first few miles of the course and felt good. Better than good. I have this thing I do before a race. I ask myself, if I had to throw my chip back into a bag and pull a new one out, would I do it? Saturday morning it was a definite no. I was good. But, in the back of my mind I still was questioning my endurance since pretty much for the last month, I’ve been just pedaling around.

The race started all jacked up as usual. I talked to Gary (Crandell-promoter) after the race about it and maybe next year it will be better. But, with 2000 people riding out of a town on MTB bikes, it is always going to be pretty sketchy. Anyway, when the quads were supposed to gun it and take off, they decided not to and everything got jammed up. Someone ran into my rear derailluer and that was the story of the day for me. Maybe, not the story, but a long chapter. I tried to straighten the derailluer on the road going 30mph, but didn’t get it fixed. I didn’t realize at the time, but my cable housing had exploded and the cable had unraveled. The whole race, I had the use of only the middle gears in the back and they only stayed adjusted if I kept two fingers on the shift lever.

Anyway, Cole House, BMC, went pretty hard through the field and into the Birkie Trail. He kept the pressure high. Ryan Baumann, Livestrong-Trek, took over and pulled a ton the next couple miles. I put in a couple digs coming off the Birkie Trail into the snowmobile track, but there were still a bunch of guys together, maybe 25, when we got onto Phipps Fire Lane. No one really wanted to get into the wind, so we just rolled until the next Birkie section. Brian Matter, Gear Grinder, put in a pretty good attack when it started going up on the Birkie section and it got whittled down a lot. I didn’t know a couple of the guys, but Jeff Hall, Brian Matter, Bjorn Selander and his Trek-Livestrong teammate, Ryan Baumann were in the group. Missing were Doug Swanson, Ian Sanford and a few other usual suspects.

When we got near OO there is a steep hill where the lights start on the Birkie trail. It seemed like everyone was bogging down, so I put in an attack to see how everyone was going and had a gap until we got to the warming hut at OO. Brian led down the descent after OO and soon afterwards there is another steep pitch and then a left turn onto another snowmobile trail. I went hard there, but we didn’t get too far away. Turning onto Janet Road, there were only 8 of us left. But, once again, no one other than Ryan wanted to keep the pressure on. I assumed he was pulling for Bjorn. We cruised Janet Road up to the Martell’s Pothole section. Usually there is a ton of huge water puddles here, but it hasn’t rained forever, so there was hardly any water. I wanted to lead through this section to lead into the corner. We had to go around some water and I got a small gap, but making a sharp right, my tires were wet and I slid out and fell. Cole ran into me from behind and both my bottles fell out. I wasn’t worried as I picked up my bottles, but Jeff or someone decided it was a good time to not have me around and it took me until the next climb to get back on.

Nothing happened for a while. We just cruised along, all 8 of us until we got to the Seeley Firetower climb. I think maybe a bunch of other guys caught on here, but I wasn’t really looking back too much. My gears we skipping up nearly all the hills, so I thought it would be best to lead up the climb. I could hear some heavy breathing and tires slipping on the loose sections, so I decided to go hard. The climb is a few minutes long with 4 distinct pitches. I couldn’t hear anyone behind me starting up the final loose section. I looked back at the top and had an okay gap, so I didn’t to go. I rested down the descent and when I got to the logging road at the bottom, the lead quad decided it would be best if he never got more than 20 meters in front of me. It wasn’t just dust, it was sand that I was breathing. This was the same section that I had rolled my rear tire off a couple days earlier in training. I couldn’t see anything, let alone the rocks. I looked back a couple times and saw Cole pulling Brian and others behind me. I finally nearly rammed the back of the quad on a sharp right turn and gave up and waited for the group. I’m not sure who was left then. I think it was just Brian, Cole, Ryan and Bjorn, but the other guys might have been there too. When we hit the Birkie trail, arguably the hardest part of the course, Bjorn put in a attack finally. And, he didn’t have it. Not even close. I think Brian sensed this too and jumped for the single-track section that connects the course back to the Birkie trail. He went down the descent pretty good followed by a punch up the next couple hills. I didn’t think anyone else was going to be there. I felt good and kept looking back. Cole was the only one there, trying to get back up to us. It seemed like every time I wanted to go hard, my gears would skip again. Brian acknowledged after the race that he was revving it up a little everytime he heard the noisy mess. In retrospect, I probably should of tried to take off there, but I was pretty confident in how I felt at the time, so I waited.

Cole clawed his way back and we hit the logging road, 6 miles to go, in a group of 3. Cole said he was cramping and sat. Brian and I did half-assed pulls the next 4 miles until the Telemark ski trails, 2 miles to go. Brian lead into the ski trails and I was 2nd. Anyway, about a mile and a half to go, there is a small climb. Brian jumped pretty good and my gears screwed up once more. Brian got a gap and I caught back on in a sharp right corner descent into “single track”. I hit my rear wheel hard on a rock and felt the spray of latex on my legs. Big problem. Trek had just brought me a set of Bontrager XXX Carbon 29’r wheels and I had about 5 pounds pressure in my rear wheel. I caught back up to Brian in the woods and there were just 2 steep pitches left in the woods before the last open climb. Cole was dropped. Brian punched it once more at the base of the first pitch and that was it for me. I’m sure my gears skipped a couple more times, but that wasn’t the problem. I was gassed. Cole grinded by me on the next pitch. On the last climb up to the top of the ski hill, Brian had 50 meters on Cole and I. I sat up, not really caring if I finished 2nd or 3rd. In retrospect, once more, that was a stupid thing to do.

Coasting down into the finish, I was trying to ride heavy on my front wheel, trying not to ruin a $1000 carbon wheel. But I was really watching Cole blast down the hill gaining on Brian. In the last sweeping corner, Brian still had 20 meters or so, but it looked like Cole was going a lot faster. I was thinking, shit, if Cole wins this race, I blew it. Anyway, Cole caught up to Brian, but lost the sprint to the line. I just rolled in 20 seconds back. Not too happy. There is only one place in this race and Brian Matter got it. I would not have been able to turn the last sweeping corner at speed with no pressure in my rear tire, but I should not have given up. At the very least, I should have gone down the hill with Cole to be in contention. I thought it was over much earlier. So much for experience.

Waiting in the holding pen for the award ceremony, it was nice to see Catherine Walberg roll in for 3rd place in the women’s race. Last year, after I flatted, I rode the whole race with her and she finished 3rd. I thought she was going to have a good result by the way she has been training recently, but you never know on race day.

After the awards, I went over to the Trek guys and had a couple beers while they replaced my derailluer cable. Then Bill, Catherine, Katie Lindquist (7th in the women’s race) and I rode gravel the hour back to Hayward to get the van. All headwind. We were all blown after 75 miles.

Anyway, now a couple days later, I’m okay with the result. I have to say that I had some pretty shitty luck. But, I also had a ton of really good luck. After the awards ceremony, when I got back on my bike, my derailleur cable completely failed and I would have had to ride the whole race only shifting in the front. That wouldn’t have worked. And, my rear tire still held some air. I wasn’t even a minute ahead of 4th and if I would have had to ride it completely flat, I wouldn’t have been on the podium. So, it is what it is. And when it comes down to it, I physically blew when I needed to go fast, so all the other stuff is just other stuff. It was a “course record” time. I’m not much into that in a MTB race. The course changes way too much to compare year to year. It is pretty amazing that the average speed was nearly 20mph. I’d guessed a 2:05 winning time before the race. The course is so groomed now that a VW Beetle could drive nearly the whole course. If the parade out of town wouldn’t have been so slow and controlled the first mile, we would have been under 2 hours. Pretty cool.

We went over to Telemark and watched the Sunday/Fun Day activities. Bjorn won the Dirt Criterium/Cross while I ate lunch. The only thing he said to me riding by was “his arms were sore”. Not sure what that was all about. Even though it was only 6 miles long, it looked painful.

I’ve been splitting wood, hiking in the woods and swimming in the lake the last two days. I’m trying to decide what to do next. Next week, next month, next….. 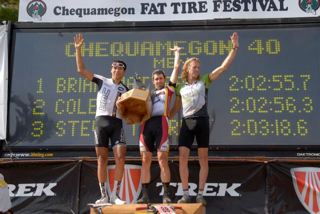 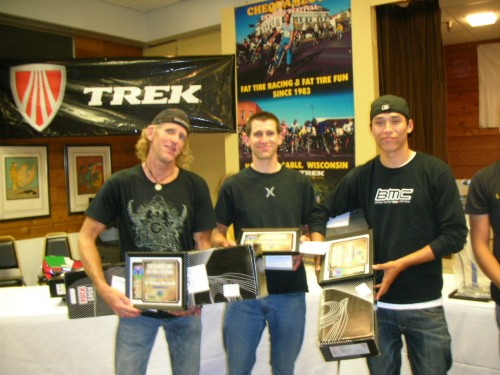 Same three as above a few hours later. 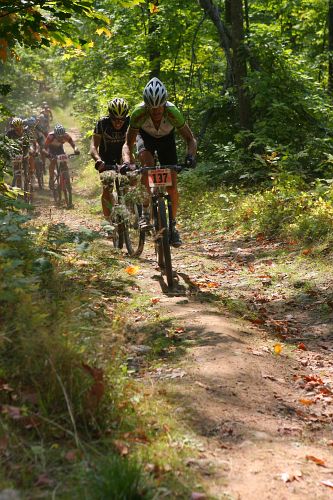 Leading at the bottom of the Seeley Firetower climb. 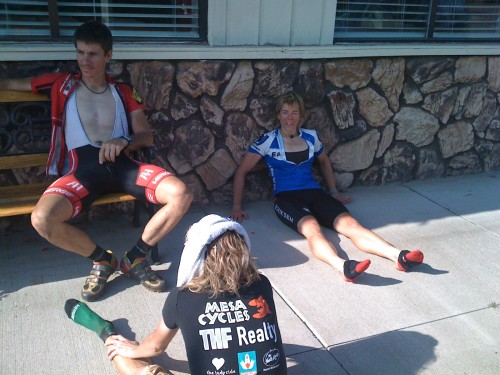 Bill, Catherine and Katie looking fresh after the ride back to Hayward. 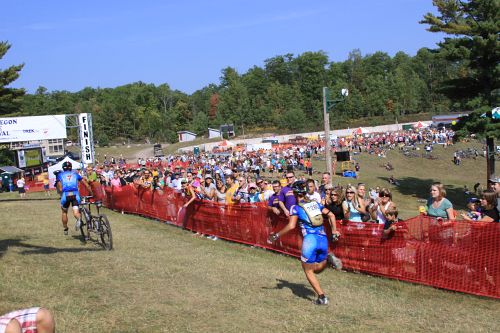 My friends, Kim and Brian Eppen, demonstrating just another reason not to ride/run a tandem in a MTB race. You can tell Brian isn't much for waiting. 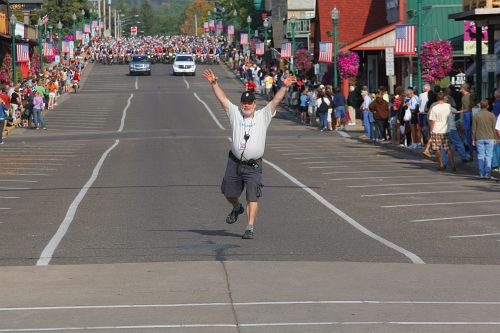 Gary Crandell, aka Fat Man, might be planning on running the race ahead of the field. 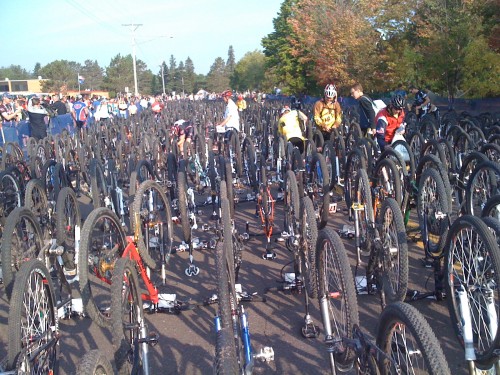 1800 bikes lined up as early as the night before.