Drove the 10 hours up to Northern Wisconsin. Again. Didn’t get up here until after 2am. Bromont had to run in the woods until 3:30 or so. Bill slept in until after noon. So, we didn’t get on our bikes until 3pm. We were going to ride the whole Chequamegon 40 course. It hasn’t rained up here much at all recently. It is super dry. Dusty. Bumpy. Bill and I were clipping along pretty good. We did the first 32 miles in 1:45. Then nothing good happened. On the nearly only technical descent of the course, my rear tire burped, rolled off and got wrapped around my cassette. My rear wheel locked up and was pretty much destroyed. We were in the middle of the forest with little more than a guess of what direction was what. We spent 15 minutes trying to straighten the wheel enough for it to go through the chainstays. The rim snapped, but i finally got the tire mounted again and limped out toward the sun. Which was the right direction. I’m getting some carbon XXX lite 29’r wheels to use from Trek, so it’s not such a big deal. I’m going to be sore again since I haven’t ridden a MTB bike for a while. 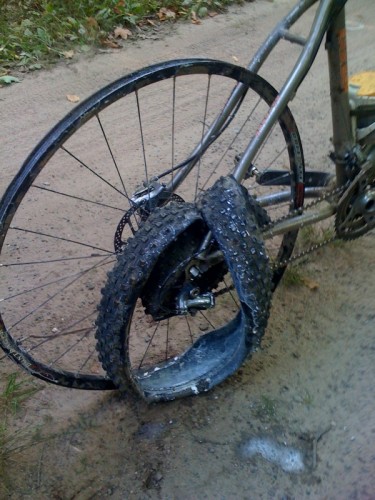 I've never had a tire wrapped around my cassette. Lucky it didn't rip the rear derailleur off.