Race didn’t start until 9:30pm. It’s kind of weird. I could count on one hand how many night time criteriums I raced in my lifetime until 10 years ago. And virtually all those would be the Athens Twilight Race. Now it seems every other race is at night. I like it, but it does make for weird sleep schedule. In addition, it’s a full moon tonight. It’s approaching 3am and our hotel room isn’t slowing down too much. Bromont, dog, is the only one that has hit the hay. That is after a bottle of wine to “calm our nerves”.

Race-The course is flat and 4 corners. Wide open. Tons of spectators that are drinking madly. The wind was not an issue. The race rolled pretty good all night. Not sure what the average was, but it never slowed much. We won two out of the three primes. Brian got into the best move on the night with 20 minutes to go and I thought it was a done deal. 6 guys go out of sight into the dark. But, Big Shark didn’t think that Colby Pierce could win, I guess and put their whole team at the front. With 3 laps to go it was back together. The field sprint is mayhem here. The road is super wide and there is a ton of passing. I was not in the optimal position on the 3rd side and went into the last corner, 250 meters from the finish out of the top ten. I was in the wind the whole way and ended up 7th. I just passed Bill on the line, who finished 8th.

Dan Schmatz, Big Shark, won in a field sprint, so I guess the Big Shark move of chasing down the break was a good decision in the end. I think Chad Cagle, Mercy, was 2nd and Josh Carter, ABD. was 3rd. Cole House, BMC, was 4th, not sure about 5th, then Chad Hartley was right in front of me. Brian was going pretty good. We won most of the primes and Bill and I were both in the top ten. Not stellar, but not horrible.

The highlight of the day was riding to and from the race. I love to ride through urban areas that I’m unfamiliar with. St. Louis is super interested because of the economic diversity. There is a ton of old money here. Really old. From the land settling, pioneering days. St. Louis was the original departure point of the trails going West. The houses in the affluent areas are nearly castles. Stone, huge, slate roofs. The ride to the race was through miles and miles of these. Then, the race was in an up and coming run down area. Boarded up apartments surround the area. And the city of St. Louis in the background. It was super interesting riding there and even better riding the 10 miles back after midnight. Everyone on the move. Super dressed up girls, in heels, bar hopping. Plus, the real estate views. Pretty cool. 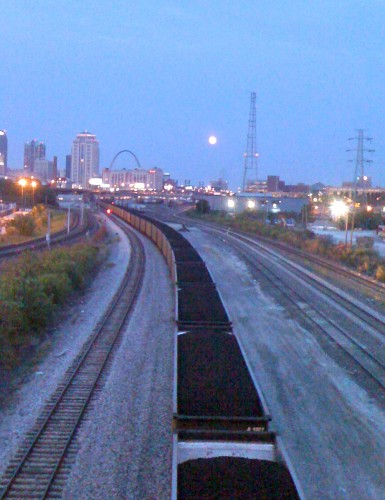 Dusk riding to the race. Full moon over the tracks. St. Louis arch in the background. 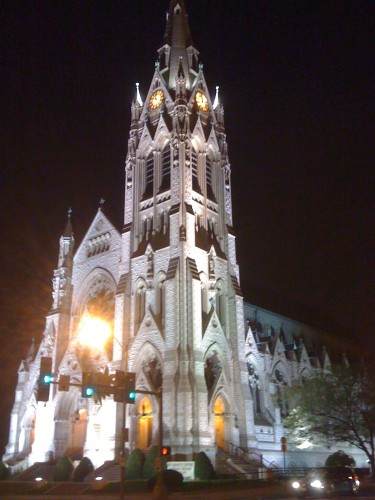 Cathedral on the way back.