Today was a near duplicate of yesterday. A flat 4 corner criterium, wide open, nothing else. It had field sprint written all over it. But, it almost wasn’t. A group of 5 got away with 20 minutes to go or so. Brian Jensen made the group and we were good with that. But, it wasn’t to be. We caught the break with about 400 meters to go. 100 meters before the last corner. Everything got pretty shuffled up at that point. Shuffled up enough that I came mildly close to winning the race. Chad Hartley jumped early when the break was caught and only Colby Pierce, who was in the break got on. I came from a ways back and latched on to them coming out of the last corner, 300 meters from the line. Mainly downhill. I tried to shift into my 11, but alas, I was already in it. I went by Pierce and was coming up on Chad in the last 20 meters, but Dan Schmatz and Cole House came by on either side and I was so taken by surprise I didn’t quite get by Hartley for 3rd. They were going 5 mph faster than me. I guess they started pretty far back. I’m not sure of the results of the guys behind me. These races are rolling along pretty good, but the courses haven’t been hard enough. Tomorrow’s race is in the Italian district and has a hill. But, probably not a big enough hill to split it up. We’ll see. 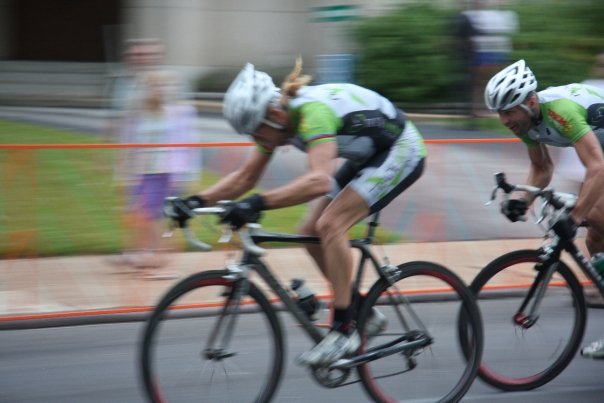 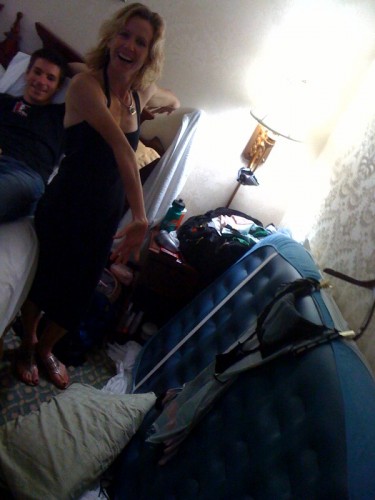 Catherine's claimed spot in the hotel room. She's proud of her organization process.