Still up in Wisconsin. After Friday night’s disaster, I didn’t race Saturday at Great Downer’s at Superweek. Friday, I fell on the next to last lap. I haven’t fallen at Superweek in a really, really long time. I think the last time was when I was a young junior in 1975. Wow. I could be wrong. It was just a normal crash. James Stemper, Team Geargrinder, got crossed up with Victor Ayala, Kahala La-Grange. When James fell I think his bars got lodged into my front wheel. I flipped over and landed on the curb chest first. The problem was that there was a tree about a meter away. I hit the tree with my shoulder going real fast. Anyway, I spent the majority of the night at the emergency room. With no treatment. I won’t rant here about that, but needless to say, our medical system needs some attention.

So, I sat out the Great Downer’s race on Saturday. I had arranged a bike with Jose from SRAM for the Sunday NRC race in Chicago. Watching Great Downer’s was good. I so very rarely watch a race that it seems nearly as exciting for me as racing. It seems so fast.

I woke up Sunday worse than the day before. I thought about not even bringing my kit down to the race. But, threw it in the van and drove down to Chicago. The criterium is at an awesome venue. Michigan Avenue by Grant Park. Crazy wonderful backdrop. The traffic to get to the race was at a standstill because of the blocked off roads. The traffic “cops” were valueless. I eventually got there.

I went over to SRAM and got a bike. It fit alright. A little long, but beggers can’t be choosers. I rode one lap, 1.1 miles and called it a warm up. I felt shitty. My shoulder is not good and I have a rib issue. For some reason, they called me to the line. It didn’t really matter. The course is wide open with plenty of room to move up. It surprised me that the race wasn’t hard. Last year, it was hard. I think maybe the wind on the start stretch neutralized the speeds. I’m not sure. Anyway, I just sat 40 guys back the whole race. There were nearly 200 starters. My only problem was the roads aren’t that great. And every crack bothered my ribs. And it got worse and worse. I never came close to getting winded once. Too much mass breaking the wind. Kelley Benefits was the only team with a full squad. They took control from 8 laps out. As it turned out, way too early.

With one to go, I was in good position. That is when I had bad luck. I hit a manhole cover right after the start line. It had a couple inch drop because of asphalt buildup. My bars dropped about 3 inches. My brakes levers were almost unusable. I tried to yank the bars back up, but they wouldn’t budge. In the mean time, I lost 30 places, at least. Finally, I decided just to go with it. I jumped on the 2nd side up the gutter. As it happened, Brad Huff jumped at the same time. He got around the front of the what remained of the lead out and kept going. I wasn’t on him, so just slotted in a few guys back. I stayed there until the next to last corner. Then my 2nd piece of bad luck. It got pretty jammed in that corner and I had to “tap” my brakes. But, since my bars had went down, the cables had tightened and I had no modulation. I ended up grabbing a bunch of brake and lost 10 places in a blink. I was sunk. I passed 4 or 5 guys the last 300 meters and ended up 14th. Brad won by himself. There wasn’t a team left to control the front. Hilton Clark was 2nd and Karl Menzies was 3rd. Sprints have a lot of dynamics, but they usually don’t go too well when a lot of problems occur. That was the case here. The money was good all the way down, so I can’t complain. The result wasn’t what was desired for the amount of pain I went through to get to the end. Bike racing.

Anyway, Monday now. Going back to the Urgent Care Clinic. Then I’m going to try to round up a new frame. And then play with my dog. 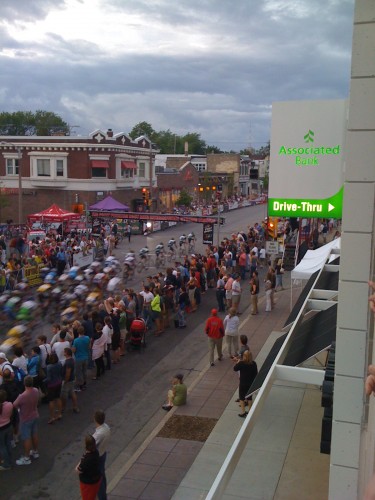 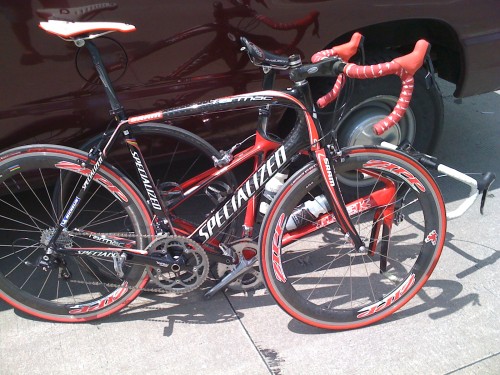 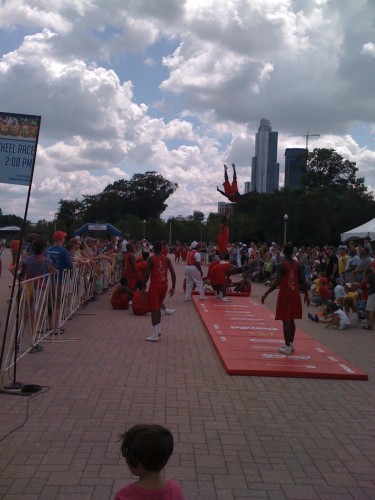 Tumbler's at the Expo. Unbelievable! 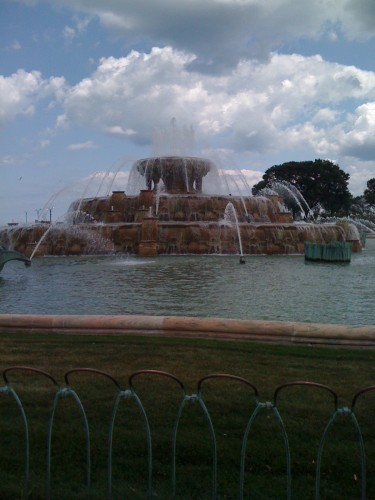 Buckingham Fountain. One of my favorite fountains in the world.

One thought on “Chicago Criterium- NRC”