It’s nearly midnight. It seems to be the way of bicycle racing nowadays. Criterium racing into the dark. I like it. But, being all jazzed up at 2 am is not that conducive to recovery. Anyway, tonight, July 4th, was a criterium in downtown Lawrence Kansas. It is a great downtown. Lawrence city council has their act together and has never allowed a mall to be built. So, the downtown is thriving, unlike the majority of other cities across the country. The criterium was a figure 8. Wide open corners that you could take 3 abreast. A little altitude gain on two stretches. Lots of wind from the North.

The women’s field was small, but aggressive. Catherine Walberg, Kenda, won the race in a sprint over new National Master’s Champion Sydney Brown, Mercy. I really enjoy watching the women’s race, but it kind of detracts from warming up properly. I wish sometimes they would race the women after the men.

Anyway, for me, it was great racing close to home. I was called up to the line first, which was nice. There were about 70 guys in the PRO 1-2 field. A pretty quality field for the size. The crowd wasn’t so big for the 7:30pm start. But, by a little after 8, everyone was coming downtown for the fireworks display and there were tons of spectators. The race was pretty aggressive from the gun. I was going okay. I’m not really sure still. I was in a couple moves, but I didn’t think it was the right combination. I knew this race was going to be hard for us to win. In theory, I’m the best sprinter. And there are a few guys faster than me here. But, that didn’t matter tonight.

With 10 laps to go, Stefan Roth, Mercy, and Health Blackgrove, Hotel San Jose, got off the front. I recognized the threat pretty quickly, but by the time I got to the front, they had a few hundred meters. I thought I didn’t jump too hard and was pulling the field, but after a half a lap I realized that I was away. It was way too windy for me to bridge a 15 second gap to those two with their power. I kept going until the field caught, but there were about the same distance. Anyway, soon, there were 6 Mercy guys and 4 Hotel San Jose guys at the front of the field. A done deal. But, the field wasn’t quite done. Brian Jensen, went up the front for a super fast lap. Dewey did a turn. But, they were still at 15 seconds with a lap to go. I thought that the Champion/Porsche guys, with Frank Travesio, would help. Guess not. Adam Bergman had been sickly the last week, but I knew he was going to take off from way out. I wanted to get a jump on that. So with 4 corners to go I jumped. But, Travesio jumped first. I ended up catching him with a couple corners to go. I wanted to lead into the final corner, but couldn’t decide where I could get by him. By the time I decided to pass him on the outside, we were into the corner and he was swinging way too wide. In the meantime, Adam must of been on me and took the corner on the inside and had me up against the fence. I ended up 3rd in the field sprint, 5th in the race, with Travesio finishing in 3rd place, then Bergman 4th. Health Blackgrove won easily over Stefan and it was too bad, because they were only a few bike lengths ahead of us at the line. Pretty good finish for the crowd.

Tomorrow is going to be a great day of bike racing. The course is mainly on the KU Campus. It is 4.5 miles and has a ton of climbing and lots of technical corners. The race is less than 60 miles but has something like 8000 ft of climbing. It is going to be the nicest circuit race that I’ve done in years. The start finish is on Jawhawk Blvd. and the race serpentines through the campus, by the frat houses, around the football stadium and even detours up a hard climb through the chancellor’s driveway, underneath a portico type thing over his drive. It is so cool that the city has the ability to close this many streets virtually the whole day. Every category races the same course. It will be privilege for all racers to get to experience this fantastic venue. The pro race is going to be epic. 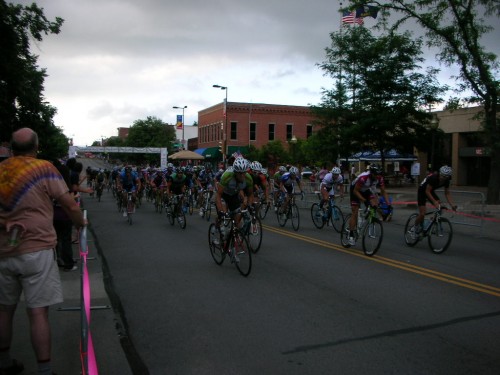 The start on Mass. Street. 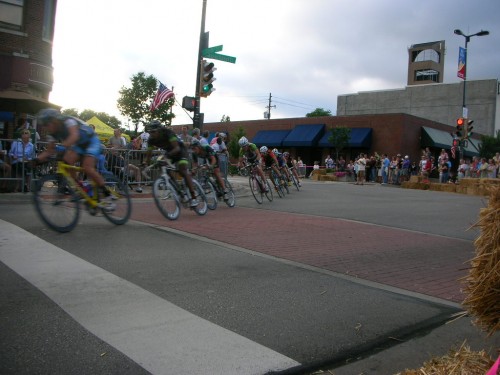 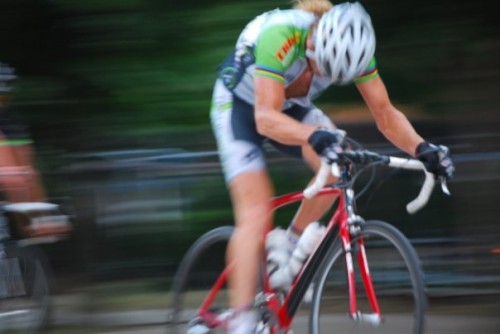 Not the best head position for criterium racing.

One thought on “Tour of Lawrence”