When I read this title of this article at Cyclingnew.com, I thought that they used the word indiscretion loosely.  Indiscretion to me didn’t seem anywhere near a hard enough word.  To me, indiscretion meant one bad judgement call or something along those lines.  I googled the word and after 10 or so definitions, I came upon this one.

[uncountable and countable] an action or remark that shows a lack of good judgment, especially one that is morally unacceptable:

So, I have to reconsider.  I guess it was an indiscretion technically.  The problem for me is that  the reason WADA went back to the Dec. 24, 2007 (and why do you have EPO in you urine on Christmas Eve?) urine sample  was because  there were problems with his current biological passport.  So, 2008 & 2009 went unchecked.   That seems more than an indiscretion.   Indiscretion connotes a minor infraction to me.  These “indiscretions”, to me, seem nearly criminal, not mere infractions.   That these “indiscretions” are becoming so commonplace does not make them right.  Let’s not condon behaviour by using language that inappropriately characterizes the nature of the conduct by minimizing it.  Words matter.

So, since I’m nitpicking  Cyclingnews.com on their choice of words, I might as well continue.  They had a article about how up to 7 more guys are going to be announced positive before the Tour.  I’m a little sick of the whole exposure thing on drugs when the limelight is on the Tour.  Anyway, they have a photo attached to the article.  Below is the photo and caption.  It like they are saying, “Athletes realize that they need more oxygen to compete, so they will train and make sacrifices to win.”    Cyclingnews has always been on the forefront of the “war against drugs” in cycling.  Seems to me that they have tempered their stance a little recently. 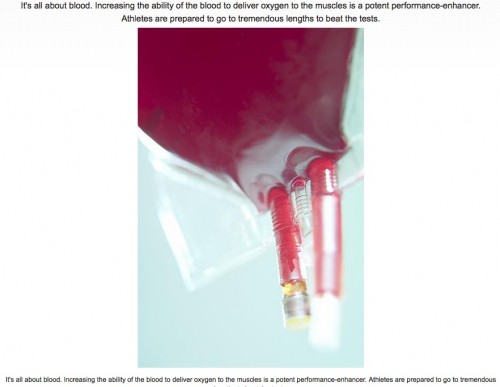