This night criterium racing is throwing off my sleep schedule again. I thought I was trained for the late night racing from Tulsa and Nature Valley, but this isn’t going as well. I’m never getting over 6 hours. Sleep is pretty important in athletics. Anyway, Grafton is a great race. I will have more time tomorrow on the “rest day” to write more. It ended up a field sprint, catching an 8-rider break with 600 meters to go. I was 10th. But, not without controversy.

I got hooked up with Frank Pipp in the last corner. There seems to be a major disagreement as to what happened. From my perspective – I went around the break on the left side and took the 2nd to last corner on the outside behind Chad Hartley. A couple hundred meters later there is the last corner. Just when I started to lean into the last corner, Pipp, who had gone around the break on the right and on the inside of the 2nd to last corner came up on my inside at the completely wrong angle to turn the corner. He wasn’t “willing” to pull his breaks, so he decided to dig his elbow into my side as he was saying “don’t do it Tilford”, whatever that was supposed to mean. I tried to keep turning; but, he had to go straight to negotiate the turn, the whole time having his elbow hooked under my ribs. This took pretty much the whole field, minus the 3 riders in the lead, straight through the corner instead of turning. I ended up all the way across the 4 lane road skidding into the outside curb going no speed at all. I had to shift a bunch to get back up to speed and ended up 10th. No one fell, which was unbelievably lucky; or, more accurately, it shows how jacked up the field was by the contact.

Immediately after the race, Pipp and I had some words. Pretty heated. He beat me and is winning the series overall now. I thought it was a pretty shitty way to accomplish that. He implied that I was at fault. Loudly, in front of most of the front of the field warming down, he said that I hooked him from the outside. My question to him, which I wish I would have asked him last night, is that if that was the case, why weren’t we going toward the inside of the corner instead of going straight to the outside. Since it was a right hand corner and I was on the outside/left, if I had “hooked” him as he contents, we would have been going right toward the center of the course. Instead, he was slamming me and everyone else into the far left curb. How can I be in control of the situation if we end up crossing four lanes and ended up on the outside corner. That isn’t anyway I would chose to take the final corner in a criterium. There can be no hooking from the front on the outside when the field ends up on the outside. He was nearly T-boning me, trying to squeeze into a hole that wasn’t there. I understand the desperate move somewhat. What I don’t get is his attitude trying to blame me for something that he did. He made the most, absolutely the most, dangerous move in the whole race by any rider in the race. Then, he has the nerve to try to put blame on me for his screw-up. I guess that is the “Professional” way nowadays. Whatever, it’s over. There is another race tonight. 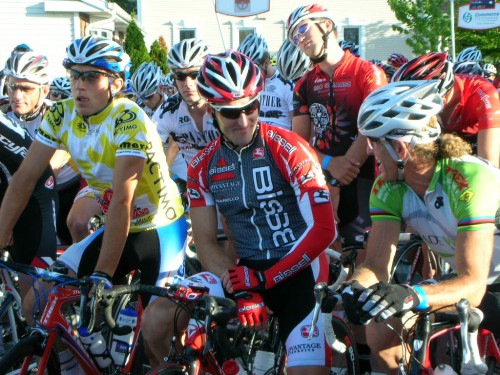 More friendly before the race with Mr. Frank Pipp. 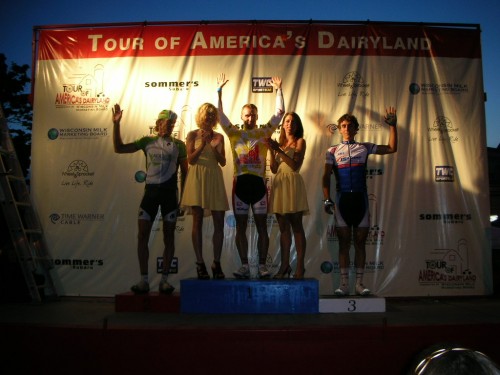 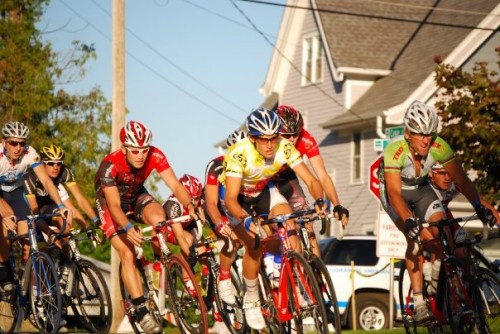 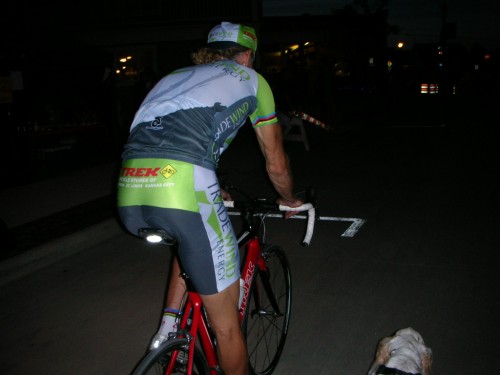 Riding back to my car at night with Bromont.