This is a new race kind of competing with Superweek for venues. Tom Schuler, Billy Ochowicz, Jack Hirt and a few others are promoting the event. It is Thursday, June18 thru Sunday, June 28th, with one rest day. Today was a 90 mile road race in Blue Mounds, Wisconsin. Blue Mounds is 30 minutes SW of Madison. It is the highest point in Wisconsin I think. This is the course they are hoping to use for the Olympic Games if Chicago gets the Olympic nod. The course was 4 laps of a little over 22 miles. There were a bunch of climbs per lap. Two substantial climbs. The finish climb was on the loop and it was about a mile and a half. Then you had to turn right and climb up to the State Park which was another mile. Pretty hard finish.

I think there were about 70 Pro 1’s at the start. Just a of smattering of PRO’s. Bissell had a couple. Type 1. Kelley Benefits. Plus, most of the Livestrong young guys that just raced Tour de Beauce up in Canada. I knew the race was going to explode quickly. It was supposed to rain, but it held off. So, it was just a super muggy Wisconsin day. The course was way too hard for the group that was racing it. Everything was kind of together after a lap. It kind of broke up a bit on the first hard climb on the 2nd lap. Coming up the last, hardest climb on the 2nd lap 5 riders were away. Frank Pipp, Bissell, and Andrew Bajadali, Kelley Benefits, rode away on the bottom of the climb. Frank didn’t look too good climbing the first lap, so I wasn’t that concerned. I was concerned about Matt Busche, ISO Corp. He won the Best Amateur Jersey at Natural Valley and was very good there. The first lap up the long climb he was super comfortable. He rode away up the climb the 2nd lap and caught the remainder of the break. I got up to Pipp and Bajadali, but somehow got split off of them thru the feed zone at the top. I’m not sure what happened. I wasn’t gassed. But, I didn’t end up in the front group of 6 either.

There were about 20 guys left in the field when it all got back together. We started gaining on the break, but I knew it was over. Everyone was going to run out of juice  around 70 miles for sure. And that is what happened. The next to last time up the climb, it got down to 6 riders. One Bissell rider from the break was ejected, leaving 5. I felt better than the previous lap. We were rotating and from nowhere another group of 8 or so catch us from behind. I wasn’t that thrilled about having so many guys around starting the final climb. I went medium hard up the shorter, next to last climb. I rode at the front for about a mile and when it was done there were 6 of us again. We rotated for a little while, but the storm was blowing in and on the ridges it was super windy. Pretty soon no one wanted to pull. I went hard up the next roller and was alone. Just a bit later, Nick Clayville, from Hagen-Berman, Seattle, bridged up. He had set the pace the previous lap up the long climb and was going good. But, we didn’t really need to be going that good to put time on the remainder of the guys behind. It was pretty shattered. We hit the final climb with the only a Sram car behind us. We got up the to the feed zone and started the last mile to the finish. I was started to cramp a little and wasn’t really concerned with finishing 6th or 7th. I asked Nick if he was doing the whole series for points and he said yes, so I told him he could have 6th. I’m not sure I could of beat him anyway. The remainder of the finishers came in one at a time. Pretty epic. Pretty much a death march. Matt Busche finished alone. Pretty good ride since he had been keying on this race. Kelley Benefits were 2nd and 3rd. Then Frank Pipp and a Livestong guy in 5th.

I would of been pretty stellar if my left leg was working better. I guess there is always something that has to give out first. It is kind of frustrating. And painful. Laying here in the hotel room, I feel pretty good. But, my left leg is seized up. Like it cramped badly and is hurt. It will be fine tomorrow I guess. Tomorrow is a criterium in Waterloo, Wis. That is home of Trek. The race is sponsored by Trek. Should be a knowledgeable crowd there! 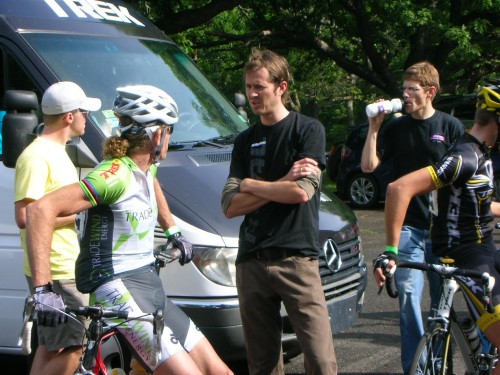 At the start with Ben Raby. He's making more $ driving the Sram car than racing here. 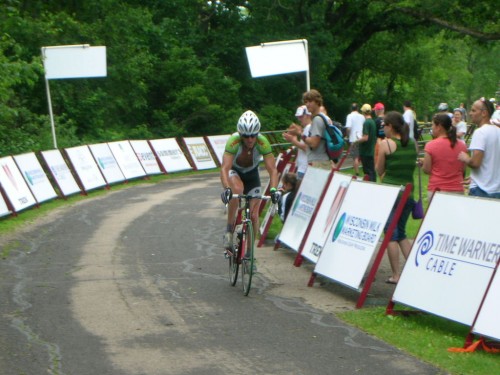 Top of the finish climb. Not looking too fresh. 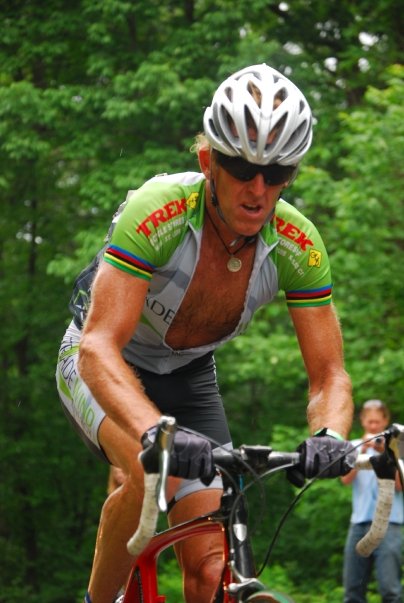 A little hot at the finish. 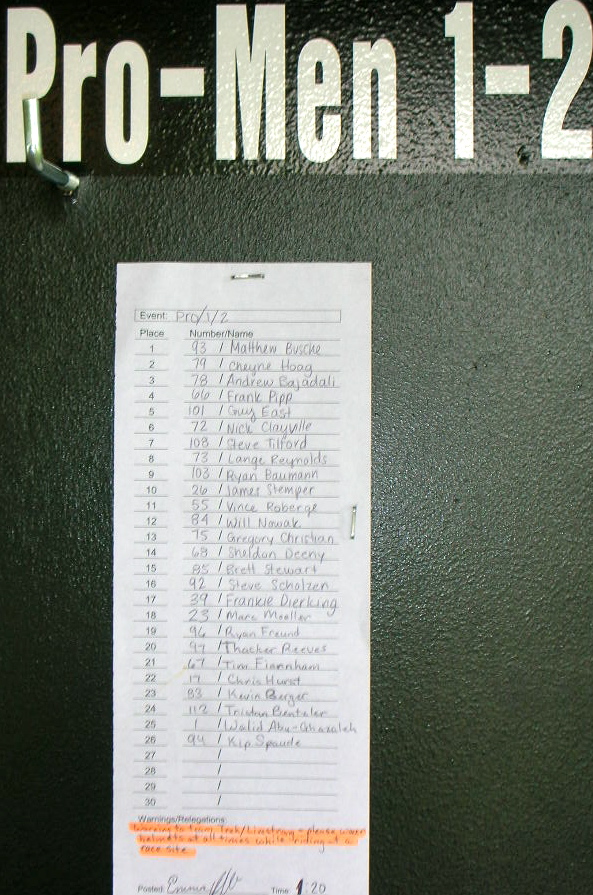