Nature Valley is over. The final day is the Stillwater Criterium. It’s more like a very hard circuit race. A little over a mile with half up and half down. The bottom of the climb is nearly 20% grade and then it keeps going for another long ways. The descent has a couple 90 degree corners and then a 45 mph pitch to nearly a U turn and the bottom to start up the wall again.

The start is pretty important. They called nearly 1/3 of the field up to the line. The top 25 in GC plus the top three in every jersey competition. Everyone else camped out behind the ropes for a long time. It was hot today, so standing around didn’t go over that well with most the riders. The race was 20 laps. That only alittle over 20 miles. But, the average speed of the race isn’t hardly 20 mph, so it seems long. Ben Raby from our team was 2nd place in the King of the Mountain Competition. The best result for our team was having him win that. I assumed that I could make that happen. There were KOM sprints at the top of the hill at lap 3, lap 6 and lap 9. I moved up pretty good the first lap, but Tim Johnson, Ouch took off up the hill at the end of the first lap. I was next to Ben and told him to follow. Then Chad Gerlach, who was winning the KOM competition jumped out of the field and I followed. He caught those two in front pretty quickly. Bissell had barely organized their tempo session at the front, so we had a good lead. I felt good and went by and just pulled. After a lap and a half, it went bad. Ben thought the sprint was the third time up the climb. It was after 3 laps. So, I was pulling and when we hit the bottom of the climb Ben attacked and dropped us. Then he sat up. When I got back up to him I told him he sprinted a lap early, but he didn’t think so. We were still dangling off the front and when we hit the bottom of the climb the next lap, Chad jumped. Ben went with him, but his chain skipped off under torque, and he came out of his pedals and skidded to a stop.

The Bissell train came by us. Gerlach was done I could tell. I just sat in the field for the next 5 laps until the last KOM. I felt good, so I started drifting back looking for Ben for the last KOM. There weren’t more than 40 or so guys left, but no Ben. I assumed that he took a free lap. He didn’t. That’s when I lost motivation. I kind of put in a half hearted effort to ride back up the front but just pulled over to the official at the bottom of the hill and told her to score me. You only had to ride 5 laps to get a finish time. But, she told me I was quitting and that she had to officially pull me. So I sat there another minute or so and discussed it with her. Then rode another lap and got pulled officially. I can count the times I’ve quit races on less than two hands. I guess I didn’t quit really, but I really did quit. I felt fine. I wasn’t struggling. I just didn’t want to be that hot for another 20 minutes. And it seemed my purpose to race was gone. I don’t regret the decision yet. I hope I do pretty soon. That wouldn’t be good if I don’t.

Rory Sutherland did what I thought. He took off with two laps to go, bridged up to a 2 man break and killed it the last lap. He put something like 10 seconds into Tom Zirbel and won the Overall by 3 seconds.. Pretty good riding. I’m not sure what the Bissell team could of done to stop that.

I’m trying to decide whether to go to Chicago and race a few of the American Dairyland Races Thursday and Friday or just go home and ride The Winghaven NRC race outside St. Louis on Sunday. I probably should let it sit a little bit before I decide. 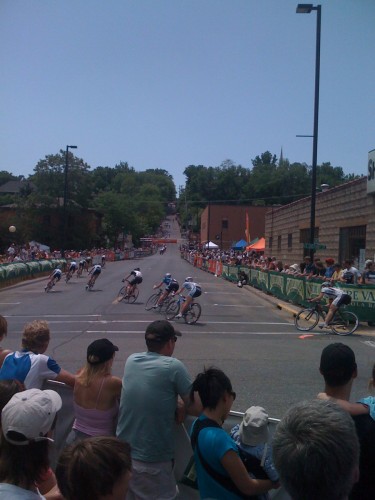 Start finish stretch showing the start of the hill in the background. 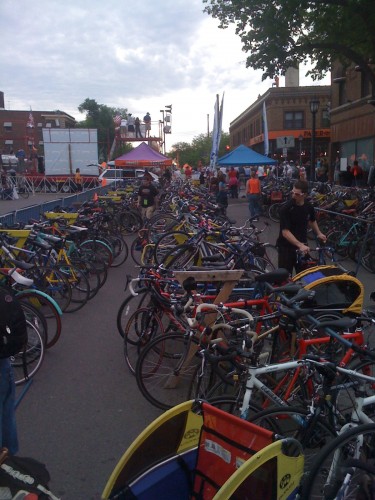 Each criterium had bike corals that were always full. Pretty cool collect of bikes.