Rock Island. A 50 lap, 40 miles .8 mile figure 8 course in downtown Rock Island. Flat. The weather was looking like rain the whole day, but it held off. It was windy though. This race is hard to read. It’s a field sprint usually, but a lot of times breaks succeed. The wind made the race seemed destined to split.

It was going pretty good all day. I was in a fair amount of moves. I felt better than the previous 3 days, but not stellar. But, the couple times I was with Adam Bergman, Texas Road House, I realized he was going to ride away eventually. And he did with 10 laps to go. Bill and I made a pretty big effort, but weren’t up to the challenge. Adam was with Gregory Christian, Panther. He had showed his power on Friday bridging up to the break at the end and power it almost to the line. When I heard the announcer say that he was with Bergman, I lost all hope and went back to the field. Road House had 10 other guys in the field, so we were not going to catch the break. It was only 6 laps left, so I was trying to recover

On the last lap, 5 of the Texas Road House guys got lined up to lead out John Puffer I guess. I was maybe 15 guys back, but had 5 corners to move up. I got to the long back stretch, two corners from the finish maybe 10th and decided to go from there. Normally, the 1st guy to the last corner wins. That means that you want to be in the top three around the 2nd to last corner. It amazed me that the Texas Road House guys weren’t going faster. I was going by them pretty quickly and went throught the corner perfectly in 3rd. I figured that the rider in the front was done and I only had to go by one guy Kirk Albers. But, as usually in this race, the first rider fell. I had to go straight and skid up towards the outside curb. Kirk made it through cleaner than me, but was over geared too. I shifted up a couple in the back and got to within a couple bikes lengths by the last corner, but was pretty much done. I assumed that the rest of the field made it through on the inside and would be coming by pretty quickly. But, no, they got held up and I just needed to go by Kirk to win the field sprint for 3rd.

I’m not sure what to think. I wasn’t having a stellar day, but I hate being in a race and no race for the win. I was 3rd in the race last year too, so maybe that is my destiny. Catherine Walberg finished 3rd in the women’s race. Meredith Miller, Tibco won out of a 6 rider break. Catherine was 3rd the day before in Muscatine, so her last two days were awesome.

We’re heading down to Tulsa Friday for the Tulsa Tough NRC. 3 hard criteriums. A ton of money. Something around $150,000 for the weekend with the majority for the PRO race. It’s gonna be pretty hot and hard. We don’t race until 10pm on Friday night, so it’s going to be a weird sleep cycle again. I like racing at night. Makes the speeds seem so much more and with the shadows, it’s really makes you focus. Should be fun. 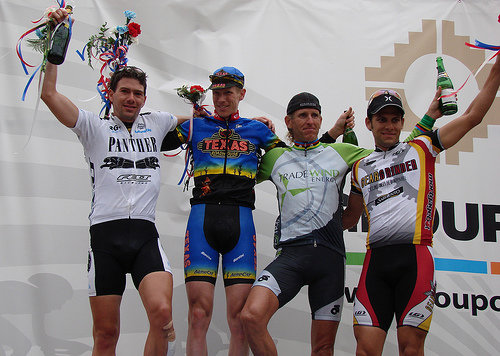