This is a epic race. One of the best races I do all year for sure. 20 laps on a .9 mile course up a switch backed, brick climb and down a screaming descent. This year, add water in the form of rain. I won the race the only other time I’ve raced it in the rain, but this wasn’t to be. I’ve been riding pretty mediocre for the past week. I didn’t confirm the feeling until Burlington Road Race. Just flat. When it started raining before the start, I got a little more motivated/nervous, but still didn’t have any confidence. 107 guys started. It is a cluster f*** at the back the first time up the Snake. Alot of walking for sure.

Long story short, I started fast and was gone immediately. At the bottom of the descent I couldn’t see anyone behind me. For a minute I though, just maybe. Then, Paul Martin for the Panther Team was coming up. I waited, but on the next climb he came off and lost more time on the descent. Then he motored up on the flats again. Eventually, Brian Jensen for Tradewind Energy and a few others got a small group formed. But, I was flat. Brian rode away and I rode up the climb slow. But he never got a huge gap. Then Adam Bergman, Texas Roadhouse went up the climb pretty hard and that was all she wrote. He rode away and the rest of us screwed around. I was feeling weird. Sometimes up the climb I felt super and then the next lap I was done 3 switch backs from the top. I could always get back on on the descent. It was wet with 3 super fast 90 degree corners. With 9 to go I felt okay and thought I’d try to catch Adam. I rode two laps pretty hard off the front of the chase group and barely took 8 seconds out of him. Then I fell apart, sort of. Well, lost motivation for sure. I realized that first was gone. Our group split into ones and twos. I was at the back. Ended up finishing 8th. I didn’t really care. If it would of been dry, I would of been buried.

Brian finished right behind me in 9th and Chris Hall came from lining up 103th to 13th. He had the ride of the day for our team. It was nice to see Iowa local, Amanda Miller win the women’s race handily. She should of won last year except for some mechanical problems. It is a classic race and it’s nice for her to win it so close to home. Today is Muscatine Criterium at 4 pm and then Rock Island Monday afternoon. It is a pretty nice way to spend Memorial Day Weekend. 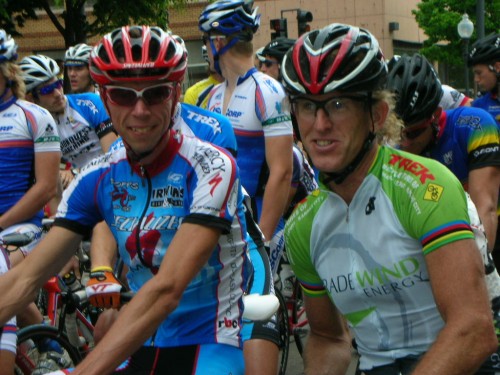 Our new kits. Me & Dewy. He had a good race finishing 4th 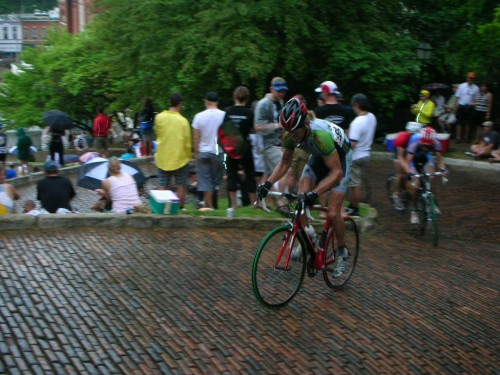 Early when I had power. 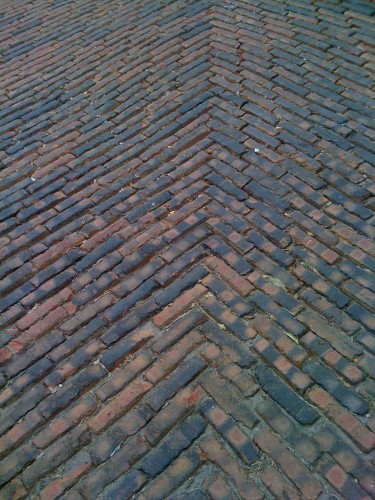 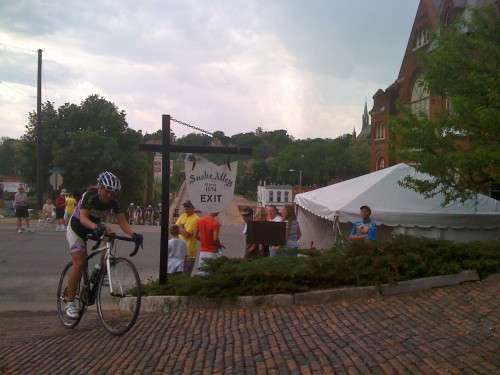 Amanda Miller rode a perfect race and won on her own.

One thought on “Snake Alley Criterium”