Today was a 93 mile road race. 3 laps of a rolling 23 mile circuit plus 12 miles out to the course and back. No rain. A little windy at the start, but it calmed down during the race.

The race was going pretty good right from the gun. But, it didn’t split until we hit the feed climb about 14 miles into the race. A lot of different teams wanted to put some pressure on Ouch and a big break of 10 guys or so got away. It was definitely very hard up the climb when it split. I had no ability to cover the move. But, I wasn’t too interested in the move either.

The Ouch team got pretty organized at the top of the climb. They were rolling along pretty good. Around 30mph. Then the Bissell Team lined up behind them. The the V Australia Team behind them. So, the first 24 spots were taken. (Just like it Europe is the only explanation I’ve heard so far.) It stayed that way until the 2nd time up the climb and everything fell apart again. Everyone attacking, Ouch drifting back. But, it all came back together a few km up the road. Ouch got sort of reorganized for the next and final lap, but when we hit the climb, Kelly Benefits put in a pretty hard attack a km from the bottom of the climb and that was all she wrote for the Ouch Team chase. By the time it all calmed down and everyone was sort of back together, I think there were only 3 or so guys left for Rory Sutherland. The break still had a minute and a half. So, V Australia and the Land Rover guys started helping out. They were rolling along good.

We got the break in sight about 10 miles out and caught them with around 5 miles to go. The sprint was a little messy as usual. Downhill to a narrow coned section and then uphill the last 300 meters or so. I couldn’t really tell if anyone was doing a very good leadout. I was just trying to rest and stay out of trouble and in the main blob not too far back. Anyway, I was in great position with 300 meters to go, but right when I started sprinting, I hit a big stick in the road and it threw me off balance and I had to stutter coast. By the time I got going again, I wasn’t going fast and ended up 12th. I probably wasn’t going to win, but I was going to finish much better. I wasn’t 3 bike lengths out in 12th, so I have no idea where I would of been. Haedo won for a 2nd day straight. He is fast. Results below.

I was told that there is a special first cyclo-x racer prize here. Overall GC I guess. Pretty heavy hitters with Tim Johnson, Jeremy Powers, Troy Wells, Andy Jaques-Mayne, Frattini, Tyler Wren, etc. I don’t think it’s looking too good for the home team unless it is a torrentiall downpout during the criterium tomorrow. And who wants that?

Side note, Trudi got the van stuck at the feed zone. All the other teams tried to help her out, but it took the land owner and a bunch other smart mountain guys 2 hours to get her unstuck. Photo below.

Tomorrow is a 90 minute criterium on a hill. Hard course if they are tempoing hard at the front. Once again, it is supposed to rain, so life will be real interesting if it finally occurs. 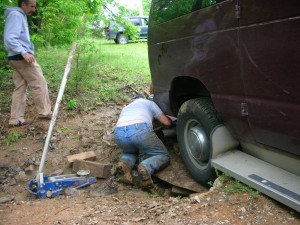 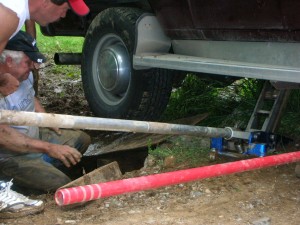