Drove up to Iowa with the gang for the Iowa City Road Race and Old Capitol Criterium. Both the races are good. Nice courses. Well promoted. Just a fun bicycle racing weekend. I won the Iowa City Criterium nearly 25 years ago. I think I’ve only raced it twice. A couple years ago, Brian Jensen and myself were 1st & 2nd. Our team, TradeWind Energy/Trek Store have 4 guys here, which is a good number for a regional race. Not too big to overwhelm the field, but enough to take turns and ride a good strategic race.

The road course today was a 13 mile loop with a couple big ring climbs. It historically has been very windy, but the storm that was supposed to pass through midday never came. So, it was relatively calm. Less than 10 mph for the majority of the race. But, the temperatures were in the 50’s and it was damp. Kind of cold standing around for sure.

Anyway, the race was a little negative from my perspective. But, I think that is nearly always the case when the course or conditions don’t help make the selection. We only race offensively. It is way more fun and the results usually reflect the efforts. I wasn’t having a great day, but not horrible either. I got into a couple moves, but didn’t have enough to just ride away from the field. Finally after 50 miles or so, the field started getting a bit tired and the wind picked up a tad. On the last lap of 5, I went pretty hard up a hill with Brian on my wheel. The wind was coming from the left, so I knew there wasn’t going to be much of a field left. Brian jumped over the top with 3 riders in tow. I should of went, but thought that might be too greedy. In retrospect, it was an error, but you can’t kick yourself for making a decision on the road afterwards. Only learn from it.

Brian rode away in a group of 5. The rest of the field seemed pretty done. I rode away virtually at will pretty much the last 6 miles, but never could stay away. I had the wind, but not the power I guess. Brian shelled the break as soon as they started sitting on. 6 miles to go. I got caught the last time with less than a mile to go. Brian won alone. I got a OK leadout from Bill, but ended up getting beat in the field sprint by last years winner, Dan Ajer I believe. It was only for 6th place.

Catherine Walberg, Kenda, who seems to be always getting a mention nowadays, won the women’s event handily. There were nearly 40 women there, so it was a pretty good race for them. We still need to figure out a way to take credit for her results somehow.

So, now I’ve raced the Iowa City weekend 3 times and I’ve either won or a team mate has won every event I’ve entered. That is kind of lucky I’d guess. We’ll see if we can extent the streak for one more year tomorrow. Maybe Iowa City is like Japan for me. I am undefeated in the nation of Japan racing bicycles. 3 times racing MTB and once on the road. I probably shouldn’t go back there to race and just leave well enough alone.

For the tourist in you – The road was held in Kalone, Iowa. 25 miles Southwest of Iowa City. It is Mennonite country. Lots of carriages. Home cooked pastries and bakery items were.75 cents. Huge, homemade cinnamon rolls to die for. I definitely gained weight.

Tomorrow the criterium is next to the University of Iowa around the Old Capitol. It has a pretty good climb in it and lots of corners. It is supposed to rain nearly all day. Should make for an interesting race. It’s raining already. Stay tuned. 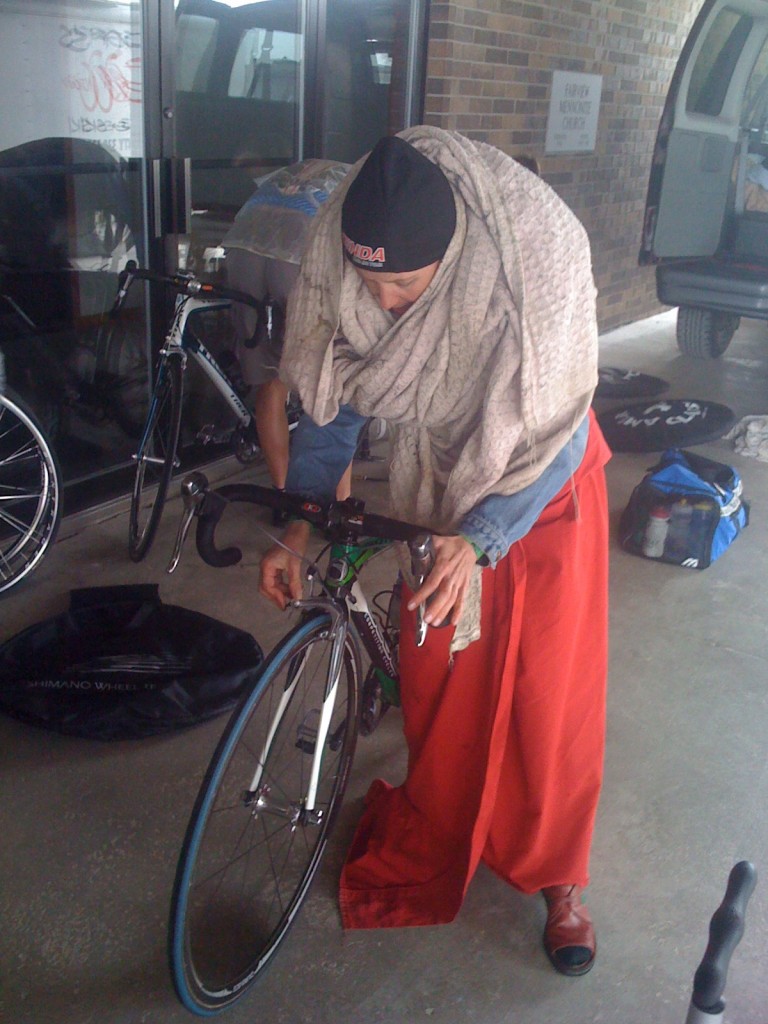 Catherine, emulating a bag woman, trying to stay warm before the race with bike blankets. 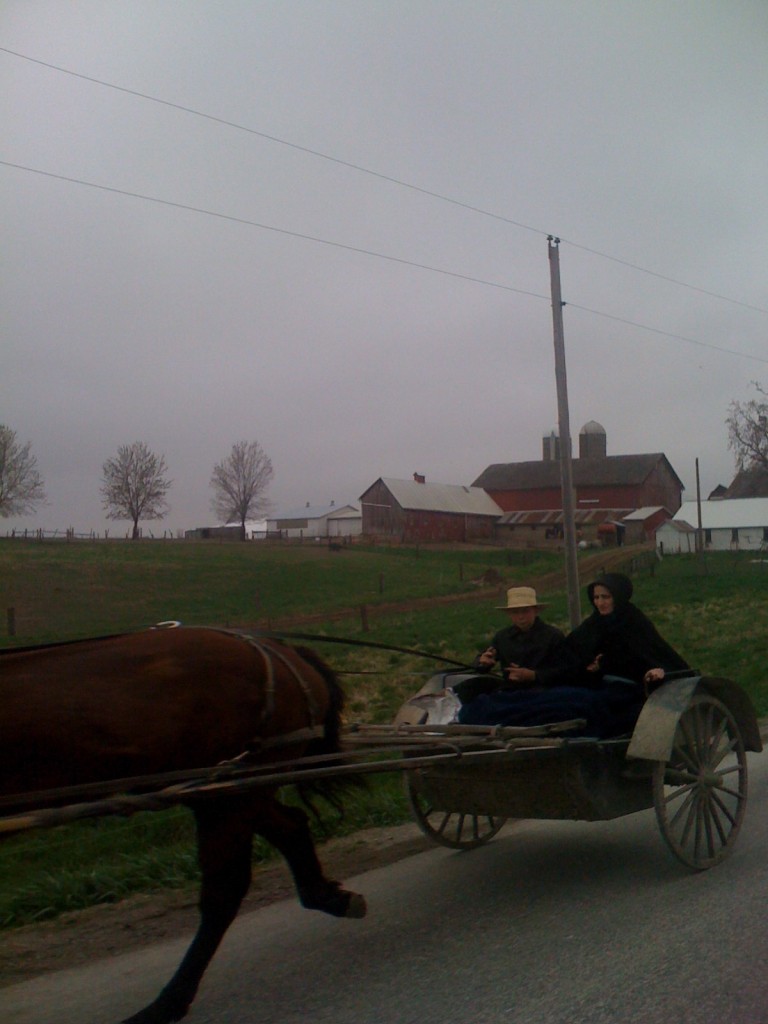 Mennonite carriage shot from the van on the way to the race.