I went down to a couple road races in Tulsa this past weekend. I’ve ridden the first race several times, but Sunday’s course was new to me.  Tulsa is a strange town.  Kind of depressed and hip at the same time.  I’m not sure where the money comes from there, but every time I go there it is a constant construction site with new building and repair.

Saturday is Salt Creek Criterium.  It is really a 2.5 mile curcuit race shaped like a barbell.  The start/finish line is at the top of a hill in the middle.  I’ve won the race and finished 2nd once.  4 of us went down to Tulsa from the newly sponsored Tradewind Energy/Trek Team.  Brian Jensen who I’ve been racing with for on and off the past few years is back from 2 years on the “Pro” circuit.  He is working full time for Tradewind Energy, a local company that develops wind projects.  I’ll do a writeup on them later.  Anyway, it is going to be fun racing with Brian again.  But, Saturday, we got our wires crossed.

Almost immediately I found myself off the front with Stefan Roth, Texas Tough.  He is a strong guy and  has been riding his normal good this spring.  He finished 3rd both races last weekend in Austin.  3rd on Sunday with one million Kelley Benefit guys  was a good result.  I was feeling just OK.  I figured I could beat him in a sprint, but Brian had separated himself from the field with two other guys, so I was pulling with just a 75% effort.  I was being a ball hog and wanted to finished 1st and 2nd.  Finally on the last lap, Brian caught up with Joseph Schmalz.  We attacked Stephan a few times, but it just wasted all of us.  This was Brian’s first race of the year, so he wasn’t up to speed.  Anyway, to make a long story short, Stefan waxed us in the sprint.  I can’t make any excuses.  He was going good and I just screwed up.  So we finished 2nd and 3rd on the day.  Pretty embarrassing.

Sunday is a pretty demanding 5 mile road curcuit race West of Tulsa along a reservoir.  It has a longish one mile climb and a few good rollers making it a pretty hard race, considering it is 14 laps.  Again, the race split up pretty quickly on the climb.  I was with Brian in a lead group of 10 or so.  Texas Tough had initially 4 riders in the group.  I was feeling pretty bad.  I’m not sure why that was.  I rode for an hour in the morning and thought I had pretty good form.   I told Brian I wasn’t good.  Then he flatted.  Immediately the attacks started and I decided to let Alex Welch from Texas Tough and Joseph go up the road.  Much better than Stefan or Chad Cagle who are both pretty good at riding by themselves.  Brian eventually caught back on after a lap.  He made a big effort. I wasn’t feeling any better, so I pulled a bunch the next lap to the bottom of the climb.  Brian took off and dropped the remainder of the break, but didn’t separate himself from Stefan.  I was in no position to go.  Joseph got dropped during the next hour, so it was just Brian and two Texas Tough guys up the road.  I thought those odds were OK since Brian is way stronger than both of them.  And I was riding like s**t.  Two Tulsa Tough guys, Will Gault and Janne Hamalainen, pulled Chad Cagle and me around from the next 40 miles.  They were both going good and kept the break at around 2 minutes.  I started feeling much better during the last hour.  Not stellar, but pretty good.  So with 2 laps to go I jumped away on the climb.  It was relatively easy shelling those guys since they had been in the wind the last 2 hours.  And I was going pretty good.  I ended up taking nearly a minute out of the break the first lap and knew I had a good chance to catch them on the last lap.  But, I didn’t know that they had slowed down dramatically trying to keep Alex, who was completely blown, off the front.  At the top of the climb the last lap I passed Alex who was mixed in with a bunch of lapped riders.  Then I caught up with Brian and Stefan.  They had already came to an “understanding” of the finish, but with new blood, me, in the mix, those agreements are over.  The sprint was downhill around a sweeping corner.  Brian went to the front the last mile and keep it in the gutter.  He was a bit more done than I thought.  I jumped kind of late and could hardly get through on Brian’s inside.  Stefan was coming up pretty fast, but I won by a wheel. It was pretty nice winning at least one race on the weekend. When Brian gets a few more races under his belt and I’m more my normal self then it should be way more fun and less painful. Anyway, our team won 1/2 the races and had 2 out of 3 of the podium spots on both days, so you can’t complain too much about that.

It is pretty weird in the sport of cycling how things can change during the race.  I was riding horribly the first two hours and came around eventually.  I would of bet a million dollars with 30 minutes to go I was not going to win that race.  Stefan would of bet anything with 30 minutes to go he was going to win that race.  That is the cool thing about the sport.  If I’d been racing a MTB race, I would of probably quit.  Or a running race.  But on the road there is always a chance that you can come around and eventually get going good.  Greg Lemond told me once that the year he won the World Road Championships over Sean Kelley, he was bad the first 4 hours.  Then it started to rain and he felt great. And he won in a sprint.  Weird. 4 hours bad and then good.  I hope that it doesn’t take me 2-3 hours the rest of the season to get going or I’m going to be in trouble in a lot of criteriums this year. 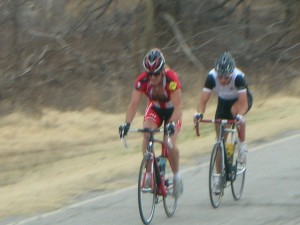