I’ve come down to Texas the last few years to get some early season fitness.  There are two back to back weekends that have two 80+ mile road races each.  So, that adds up to nearly 320 race miles plus a gob of miles Monday-Friday between.  It doesn’t hurt that that normal high temperatures are in the lower 80’s. I traveled Tuesday thru Friday last week and didn’t ride much at all.  Plus, I haven’t done any intensity since cyclocross season, so it was going to be a effort as usual.

The Walburg Road Race is an 3 lap race.  It starts way too early in the morning, 8am. and is usually really windy, which is OK with me.  Bill Stolte and me are the only two riding here from our team, so it was going to be a long stretch to win this race.  Bill did his normal first lap effort here and got into a 5 rider move.  The wind was pretty calm and nobody seemed too concerned.  But, towards the end of the first lap, a storm came through and the wind picked up to around 30mph.  Needless to say, the field blew to pieces over the next 10 miles.  I made a split with ex Toyota-United teammates, Heath Blackgrove and Chris Wherry.  But, instead of working they decided that attacking would work out better.  I don’t understand the tactics, but it worked to remove me from the mix.  At the time, I thought they were picking on me, but upon reflection, I wasn’t fit enough to participate in the move.  So, Heath and Dave Wenger went up the road and I went back.  I was in the remainder of the field, but it got into the gutter seriously.  I was riding on the right of the white line and eventually was riding in gravel which was not a good thing.  I ended up riding the next lap with 5 guys and realized that it was going to take forever to finish the next lap. I have been feeling kind of out of sorts and under slept, so I bagged it.  I don’t think it is a good precedent to quit the first race of the year, but intellectually it was the right decision.  Emotionally, it is still a sore point, but that will pass.

Anyway, Blackgrove and Wenger went up to the first group, blew it apart and Bill was the only guy to stay on.  He ended up 2nd on the day behind Blackgrove.  It is his worst result at the race.  Two years ago he won, so it’s a step down.  But, an awesome finish considering.

Pace Bend is a 6 mile rolling loop in the Texas Hill Country.  I’ve won the race, never finished worse than 5th.  It is a good course for me, but it rolls pretty fast and a break nearly never succeeds.  They move the finish line around and this year the finish was on an uphill, which is better for me.  The race went as it normally does.  A few small groups got away throughout.  4 laps to go, a serious 3 rider group got away.  On the next hard climb a big group with most of the best riders formed.  I was in the group of around 10.  We hardly stayed away for 4 miles before getting absorbed by the rolling mass.  But, the speed had picked up and the break was consumed on the last lap.  Stephan Roth made a solo move out of the break and made it to less than 2 miles from the finish, but it wasn’t to be for him.  A few leadouts tried to form, the the road leading up to the final climb was very curvy.  There was a sharp sweeping corner at around 400 meters.  I was 5 or 6 back when Heath Blackgrove jumped to lead out Chris Wherry.  I was getting bumped around a little and ended up behind Phil Wikoff from Squadra.  He jumped and I decided to stay on Wherry.  But, when Blackgrove swung off, Chris kind of stalled out.  I had to back off alittle and go around on the left.  But, when I tried to get back up to speed, I was over geared and under powered.  I barely got past Wherry just as Josh Carter was passing me for 2nd.  So, I finished 3rd on the day.  And I wasn’t that happy with that results.  The sprint was winnable, but I didn’t execute.  Bike racing. So, 5 days of sleeveless riding now.  Not a bad way to spend a week in February. 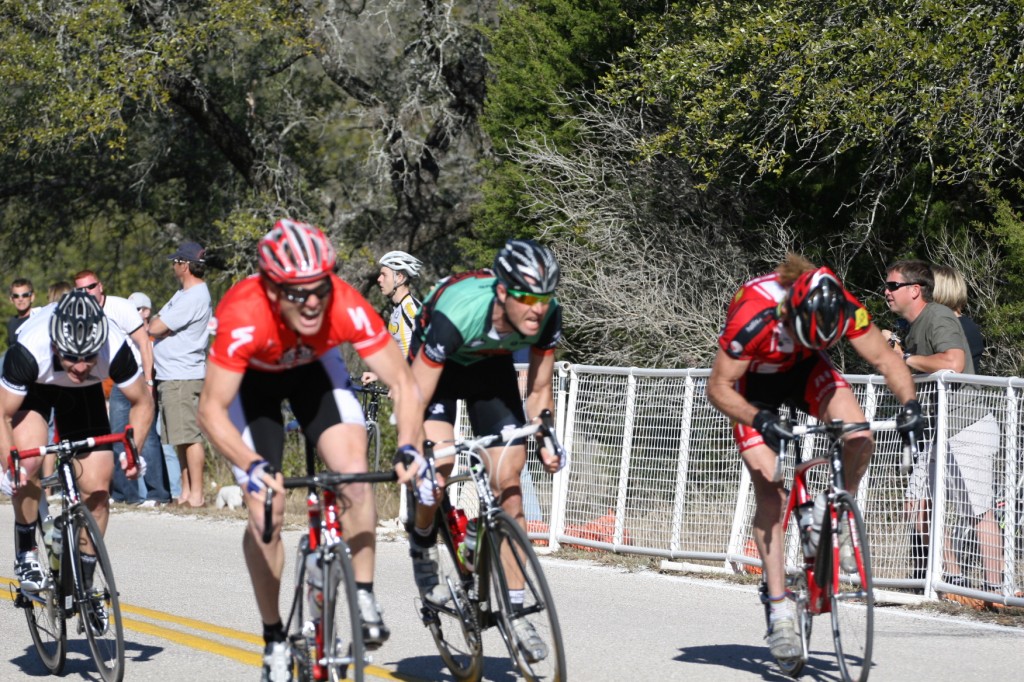 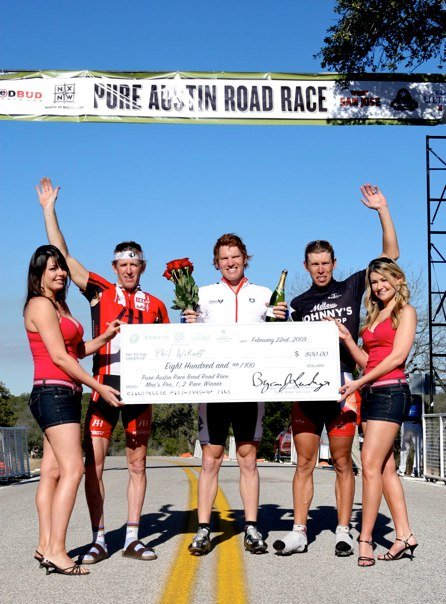