OK. I hate watching races I think/know I should be racing. I love watching racing in general, but when I’m supposed to be competing, something goes haywire in my brain and I mildly short circuit. That pretty much sums up the last two days up in Minneapolis. The two days are some of the best, hardest racing in the US. And both courses fit my talents pretty well. Steep hard climbs and then descend.

Healthnet won the race during the last two days. No one lost it. They were just too good. Rory Sutherland went up the hill in Mankato like a rocket. No one domestically could follow him at that speed. Then today,in Stillwater, they set a perfect tempo the whole day.

Kristin Armstrong was toying with the women’s field. She should of been riding in the men’s race to make it fair. Maybe that wouldn’t even be fair.

I’m still not sure I’ve learned much from being time cut. I just feel more foolish. But, I don’t regret not bringing a time trial bike to the race. For one, I don’t have a time trial bike. And two, I’m not completely convinced that time trial bikes should be allowed in these stupid short TT’s. In Tour of Georgia, the teams had to ride their road bikes. No TT bikes allowed. It was a cost consideration thing I think. Mainly applying to the foreign teams. And if that was the case, then it should be given serious consideration in certain domestic races. The cost to fly with two bikes is an extra couple hundred dollars. Instead of 4-5 riders in a minivan with their bikes, it is two cars. A few extra hundred dollars worth of gas. Just to ride in the aero position for 12 +++ minutes. It doesn’t seem cost effective to me.

This stage race is awesome. The promoters are super rider friendly. They go out of their way to put on a professional event. But, it has a few problems. This year, one such problem was the lack of ability to score the St. Paul Criterium, when it was wet. That race would of changed the overall complexion of the race. But it didn’t count. They need to get better officials or chip timing. Probably both. Easy fix.

But, the real problem, in my view, is the number of riders on each team. This is problem for all domestic stage races. The USAC has limited the teams to a maximum of 8 riders. There were 21 teams entered in the race. There are barely 21 teams in the country that can field an 8 rider PRO – 1 only team. So, 6-8 teams have full rosters, then a couple 7 and the rest 6 or less. And the best 8 teams entered have the most riders. With 8 riders, most of these stage races become complete tempo sessions. That was the case in Cannon Falls, Minneapolis Criterium and Stillwater. Mankato is hard enough at the end that even a team such as Healthnet can’t control it. So it turns into an actual bike race. I think that the USAC needs to limit the number of riders to 6. Just enough riders to use actually tactics, but when the smack comes down each day, the best riders have to race. This isn’t a three week stage race. It is a 5 day race with 2 easy criteriums, one hard criterium, plus two road races. The guy that wins should have to race (be in the wind) more than a 6 mile time trial and one 2 mile loop of the Mankato circuit, to win.

OK. Enough of that. I have a bad taste in my mouth. My own doing. But, now I get to go up to Northern Wisconsin and play with my dog in the woods for a while. So life isn’t so bad.

Below are the some of the highlights of the last two days. The Minneapolis Criterium viewpoint. Next, Hollywood and I on the hill in Stillwater. He sure has the pose down!!!! 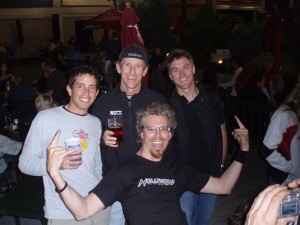 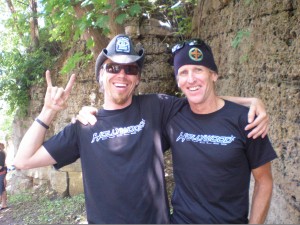