OK. I’ve been feeling like shit for awhile. Since Redlands actually. That was back in March. So finally, I went to an infectious disease doctor in Wichita, Dr. Keck Hartman. The guy is what doctors are supposed to be like. It was a revelation. He spent a couple hours with me and thought that the first thing I should do is get a CAT Scan on my sinuses. I did that last week and the radiologist’s report came back with some problems. Things that explain a lot of my problems. I need to see a ENT specialist now to see how to “fix” it.

So, I wasn’t that thrilled to be going up to Downer’s Grove kind of up in the air with the same “fitness” I’ve had for awhile. But, you can’t win races without entering races.

I started in the front and had no problems the first half the race. It was pretty wet, but my tires seemed to be good, even though I was riding a new (new to me) rear tire. After about half the race, I started feeling my rear wheel slip on a couple of the corners, a few times. That is obviously not good. I pretty much lost my bike handling confidence towards the end. For a couple reasons. Rear tire was bad and a lot of guys were falling.

A break got away with 6 guys with about 10 laps to go. Colivita went to the front and did the chase. Their main mistake is they eased up when they had a chance to swallow them up before the last lap. The break got reorganized and we ended up just sprinting into them . I was in just OK position the last half lap and didn’t want to have an “issue” with the ground on the last two corners, so I went around them kind of tentitively and ended up 11th, 6th in the field sprint.

So, that night, first thing I did was put a brand new Vittoria CX on the rear and took some sandpaper and roughed it up. Tire pressure and selection is key to going fast in the rain.

Sunday morning came up way too quickly. The Elite Nationals is late morning. It’s kind of a catch 22 for me, but that is the race I “can” race. I’ve done the race the last 4 years. I’ve never been to excited about the prospect. I’m not sure why. This year it was worse than the past. I usually have no problem motivating for wet criteriums, but I did Sunday. I only rode a couple miles and then sat around until the start.

I was called up to the line since I got 2nd last year and am also officially the oldest guy in the race. It was raining and kept raining harder and harder. I felt pretty good compared to the 100 plus degrees I’d been riding in recently. Anyway, I thought I’d try to win the mid race $500 prime to check out cornering etc. But, Frank Dierking, A & F, took off 3 laps before 25 laps. I took off to bridge up and after a half a lap, this VMG “kid” came by and pulled the rest of the way up. We got caught pretty quickly. Long story short, I came out of the last corner 1st with a good gap, the announcer is saying I’ve won it and then at the line, the VMG “kid” flew by. I didn’t know if I’d won and was pissed I sat up the last few meters.

With a half a lap to go at the top of the hill, Kirk Albers, Texas Roundhouse, jumped away and got 50 meters or so. I was 10 or so back and was keeping my eye on the gap. I screwed up and jumped too late for the 2nd to last corner. I didn’t get by the front of the field with enough time to set up properly. I went into the corner at the wrong angle, in the rain, which isn’t a good thing. I keep drifting wider and wider until I knew I was going into the curb. I somehow managed to stay upright, but lost all my momentum, still in the 11 in the back. Needless to say, I was fairly lucky only 3 guys went by me before the last corner. I was attached to the back of the slowing, Kirk Albers train coming out of the last corner, but finished 4th, only passing Kirk, who had been going full out for the last 1/2 lap. There were multiple crashes behind us, in the 2nd to last corner, that I screwed up, and the final corner.

So, I pretty much lost the race on my own. I wasn’t too upset. The VMG “kid” Daniel Holloway (VMG Racing), rode an almost perfect race. He really did. He made 2 out of 3 breaks that had a chance to win. He won the mid race prime and won the race. You can’t ride a much better race than that when you’re there on your own. He is going to be a very good criterium rider in the future. Josh Carter was 2nd and should be/ was disappointed. He came up on Kirk in the last corner and probably would of won if he could of kept his speed through the last corner.

Now it’s been a couple days. I wasn’t riding good enough to dominate that race in the rain, but had the necessary skills to win. But, that isn’t how it went. Maybe next year I can race in the afternoon in the “real” race. A lot more of them fell the last few laps than the Elite guys. It was carnage, so I’m sure I would of hit the ground. Maybe that is the bright side.

Pictures-Podium shot. Last corner, me just tagging on the back. Coming out way back. Then the carnage behind me photos. 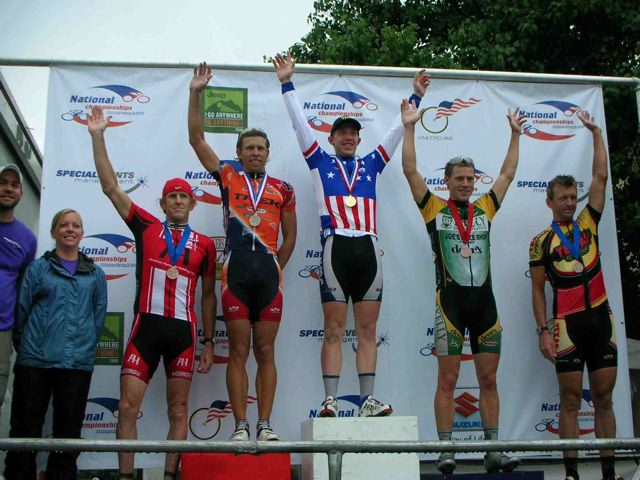