This says it all. This was a hour after the race at 5pm. Things could of been worse. It could of been 100% humidity instead of 90%. It was stupid hot in the shade before the race. It was really stupid hot during the race.

It was a 75 minute plus 5 lap “event”. I figured that it would be best to race offensively. Especially in the heat. But, offensive racing takes power. And there wasn’t much power to be found in most guys legs at the above mentioned temperatures.

Brian had the overall all but locked up. Only Dewey could catch him mathematically. So, he only had to watch one guy and the rest of us could “race”. We did that for the first 40 minutes or so. When there was a lull, Stephan Roth took off and managed to time trialed the remaining 45 minutes off the front. It was a good effort. We kind of lost motivation, but got reinvigorated the last 3 laps or so. Bill took it for a couple laps and then Adam the last lap and a half.

Shad won the field sprint for 2nd, beating out Josh Carter and Derek Goerke pretty handily. Stpehan won by about 50 meters still. Brian was 5th and I was 8th. It sometimes better not to be ball hogs and win everything. Not that it was going to happen today.

It’s supposed to be the same heat the next few days. It’s not very conducive for training obviously. Criterium Nationals is next Sunday up in Downer’s Grove. I can only hope it’s a record high for Chicago since I’m so trained for it now. 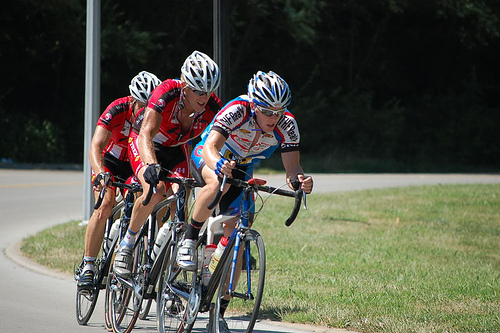