Happy New Year. I thought I’d better add some content to this even though nothing much has gone on since Cross Nationals. I added a web counter that monitors web hits etc. and I’m starting to feel guilty about everyone checking back here with nothing new posted. Anyway, I went up to Northern Wisconsin (Cable) the day after Christmas for a couple weeks of cross country skiing. No snow. Drove up to ABR in Michigan a few times, but that got alittle old. There is still virtually no snow there. The global warming critics have to be out of their minds. When I first went up there in the early 90’s, there was over a meter of snow before Christmas and it never stopped snowing until spring.

I’ve had some muscle imbalance (self diagnoised) issues and decided to do some weight/core stuff this winter other than skiing and construction. I went to Julia (personal trainer in Topeka) yesterday and did alot of “different” balance/weight things. I can’t believe how pitiful I was at most everything. It was 66 degrees in Kansas today. A record high for the critics. I rode 70 miles to Lawrence and back, stopping at Starbucks. Now I can barely walk I’m so sore from weights/whatever. It’s weird that when I’m sore from a different activity, it gets exacerbated from riding.

Applied for a new racing license a couple days ago. I wanted to be prepared just in case one of those warm early season trips came around just when the weather sucks here in Kansas. Anyway, when I was on “my USAC” section, I clicked on the ranking and I’m ranked #1 again under National Elite Criterium Rankings and fifth or something in the Road Race category. Someone emailed a link to this years ago when I was first in both categories and I could never figure out how or why or what they used for information/results to formulate/calculate these rankings. Last year at the end of the season, I was something like 20th. It is 11 days into 2007. No criteriums so far. But, I’ve moved up to #1. If anyone out there has figured this out, let me know. I guess they think including Tony Cruz, Brad Huff, etc. makes the “amateurs” look better. Anyway, I’ll paste the rankings below to make it look good for sponsors/potential sponsors/people that think they actually mean anything. Here’s a couple photos. A happy Steve/mediocre ski shot from Michigan with teammate Adam Mills (he’ll just hurt himself with poles.) You’ll have to take my word on it that we are standing on skis. And, a New Year’s Night, way past midnight, walk in the North Woods fun. Anyway, I’ll get back to you when something more eventful happens.

I’ve been asked a bunch what was the coldest I’ve ever been at a race. The ice dip at the UCI Cross race in KC (description below) wasn’t that cold. I was putting out an enormous amount of heat, riding so hard, so my hands got frozen solid, but my core was OK. During the Tour of Bisbee, back in the 80’s when I was riding for Levis, it rained the whole 90 mile road race. The last hour it started sleeting. Roy Knickman and myself ended up finishing 1-2 in the stage and overall. When we finished, we sat huddled in the corner of a local bar, wrapped in wool blankets shivering for an hour. That was really cold. But, the all time coldest I’ve ever been, by far, is when Outside Magazine came to the Sea Otter Classic to take a photo of me for an article they were doing. We raced the “dirt” criterium at the raceway in the early afternoon Saturday. It was a flowing mass of mud. When I finished, the photographer from Outside, came and introduced himself. He said that I had the “look” he wanted right then. I was covered head to toe with mud. I said let’s do the shoot then. He said he needed the light at sunset, so I was supposed to meet him in 3 hours at the top of the hill at the race track. I went back to the hotel, cleaned up and waited. I came back near sunset and rode around the crit. course for a few minutes to get “the look”. Then I rode up to the top of the hill to meet the gang. It was the photographer, his camera assistant guy, and a couple girls holding big light mattress things. Anyway, the photographer said I didn’t have enough of the mud look, so asked the girls to get some fresh mud to enhance my look. That was the start of one of the worse hours of my life. Me standing there at the top of the Laguna Seca Race track having new mud and water throw on me every few minutes. It was in the upper 40’s and he wind was blowing about 20mph. I was completely done after 30 minutes, but the guy keep shooting more film. I finally gave the guy a five minute deadline. He told the girls that I was drying out. When the girl came over to spray me with water, she aplogized. She said, “I’m freezing myself and I’m wearing a down coat.” I was shaking uncontrollably. The second I got released, I went back to hotel, sat in a super hot bath for at least an hour. I never got warm again the rest of the weekend. The photo was the perfect Outside shot. Rider standing with a sun halo. He got his shot, but it ruined my weekend. It was a frozen smile for sure. And it was the coldest I’ve ever been. Photo below.

Velonews just finished a poll on the Velonews interactive website that asked readers- “Who is the best male cyclo-crosser in U.S. history? “

They posted the poll the day after Jonathan Page had nearly just won the Cyclocross Worlds. Prior to the event, it was inconceivable that an American rider would be able to compete at that level. From my perspective, his result is the most astonishing cycling accomplishment in USA Cycling history. You have to realize how fast those guys are going and how much depth Belgians have in their Elite Team.

OK, back to the poll. I won the poll by a large margin. I’m not sure if there is anything that you can read from the results of a poll like this. I’m not sure it’s accurate, but polls, especially subjective polls, are always suspect. Maybe it’s just a popularity contest. But, Velonews is the most prestigious US cycling industry publication, so it’s readers are knowledgable (I hope!). A very big compliment no matter what you think. Anyway, thanks to everyone that voted for me. It’s nice to be recognized by your peers. 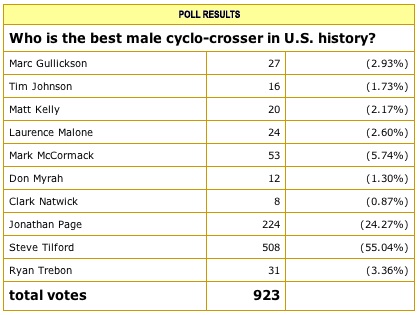