I arrived in Providence, Rhode Island, Thursday, the day before the Master’s race on Friday. I am racing all three days, with the Elite race on Saturday the focus. The course is nearly exactly the same as last year, minus the snow and ice. I’ve kind of been a little under the weather since the ice water dip a couple weeks ago, so I’m uncertain about my form. Friday was a good check. The course was great. Good riding sections with slick corners. The skim coat of mud made it a somewhat bike handling course. I got to the course way early to watch Catherine Walberg from Topeka race. She flatted after leaving the road, 300 meters into the race. I went to the pit and made sure her spare bike was ready. She was 30 seconds back by the time she got “her” bike back and eventually rode back into the lead and won. It was the first time she had won and was super excited. Then Ned’s race was on. He isn’t the most beautiful thing on a ‘cross bike, but was riding great. He started back in the smoking section and got nearly into the lead before they hit the grass. He rode a couple laps with his main competitor, then rode the guy off his wheel. Super good ride. It was the first master’s event that he has every entered, MTB, road or ‘cross. I had been standing around way too long before my race started. I rode pretty hard the first couple laps and then took it back a notch, trying to save some energy for Saturday. But, obviously, winning is nice, especially at the Nationals, so I didn’t take the event lightly. I had the luxury at the end not to bury myself and won with a healthy margin. It is nice having so much spectator support 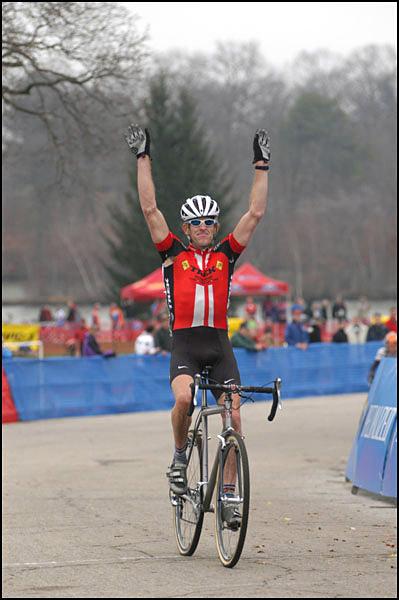