Yesterday was the Elite National Championship Road Race in Louisville.  Like I posted earlier, started at 7 am, which I heard so many complaints about in the morning.  Everyone was dragging, lined up at the porta-potties, trying to get going at such an unusual time.

As soon as I clipped in, I didn’t feel good.  But, I was sticking to my plan of trying to get three hours in and then do a systems check.  It wasn’t just that easy.

Even though I thought the race course was easy, it wasn’t.  I was wrong.  As it turned out, the race was nearly a 4 hour criterium.  There were just a couple stretches where the course was straight.  The majority of the nearly 5 mile course was super turny.  So many corners that even after 23 laps I wasn’t always exactly sure which way the course went.

There was a huge slinky effect.  The 180 guys were stretched out forever.  Sometime at the top of the feed zone, where the course doubled back, I could see the back-end of the field that was barely at the bottom of the feed.  Because of this, the writing was on the wall for the majority of the riders.  If you were too far back, it would be impossible to stay connected to the field.

The race started super hard and never slowed.  After an hour, my Garmin showed a 370 watts NP.  There were so many accelerations and so many places to make super hard efforts, I knew I couldn’t do that for 4 hours.

At 3 hours, there weren’t that many guys left in the field.  Maybe 60 guys or so.  But, the race wasn’t getting any easier.  I was never participating at the front.  I was trying to stay close enough to the front where the slinky effect was less harsh.

RIght when it was going to get going, with 5 laps, out of 23 to go, I made a mental error.  I thought the feeding was going to stop and got really out of position.  I put a priority at getting a bottle than holding my place in the field.  I didn’t lose that many slots getting a bottle, maybe just 10 or so, but that was enough.

The hardest part of the race was after the feed.  A couple false flat climbs that got super stretched out.  This is where I had noticed guys sitting up, for what seemed like no reason, but I realized it was hard.

And this lap, it was super hard.  I was too far back and it was in line and guys started blowing.  It started maybe 15 guys ahead of me, a gap opened.  Then the majority of the 15 guys ahead blew also.  Pretty soon I was left with just one other guy about 100 meters off the back of the remaining 40 guys.  And I realized I was done.

I wasn’t that depressed.  I saw the writing on the wall hours earlier.  The weird part of my form is that when the road went uphill, fast or not, I could rest.  I was at my limit when it was flat, going super fast.   I ended up riding the last 4 laps with 4 other guys, just to finish.  Rolled across the line in 48th I guess. Full results.

The officials got the finish wrong, but we rode the last lap anyway.  It was something being able to get complete the whole race feeling as bad as I did.  That was the positive.

The negative, which I use to get better, is that if I wouldn’t have been out of position that one time, I most likely would have finished in the front group.  Not being attentive just one time, cost me big time.  It wasn’t like I was going to come close to winning, or even having a result I would be pleased with.  My body wasn’t participating at a good enough level to allow that.  But finishing in the lead group would have been the best I could have done.   That is all you can hope for.  And I didn’t do it.

Daniel Holloway rode away from the field and won solo.  He rolled up to the start about 15 seconds before we started, from the wrong direction, with one number pinned on and the other number stuffed under his skinsuit.  Didn’t seem to faze him much.  It was a perfect course for him.

I actually didn’t feel that bad after the race.  I rode over to Frankfort Ave and got a sandwich, the rode back over to the course to see how the U23 race was going.  It was a massacre again, like the time trial.  Axeon Hagens Berman had two guys off the front and then two more in a following group, plus 4 more at the front of the field.  They ended up finished 1st through 7th, then 9th too.  The U23’s race time was 10 minutes slower than the Elites race, but it started at noon and it was warmer.

I rode back to Stacie’s house, so had close to 130 miles total.  I felt pretty alright yesterday after it was all said and done.

But, today I woke up like I was hit by a truck.  Man, am I tired.  I should have known.  When I’m not firing right, the after effects of big efforts is not good.  I still have another 4 days of antibiotics to take, which I’m not thrilled about, but they seem to be working, so that is positive.

Today I’m going to ride over to look at the criterium course.  It is supposed to rain tomorrow, so that is worrisome.  I have to eventually get back into racing at wet criteriums, but this might not be the best place.  The field in the road race yesterday was pretty sketchy and the course was dry.  After checking out the criterium, I’m going to head to Cherokee Park to check out Shadd’s son, Finn, race at 2.   Finn was on the feed cheering for me, and I’ve never seen him race, so it will be a treat.

Okay, that is it.  Watching the Tour.  Brent crashing with Contador wasn’t a good thing.  Trudi was pacing like crazy.  But, they both look alright.  Should be an interesting 3 weeks. 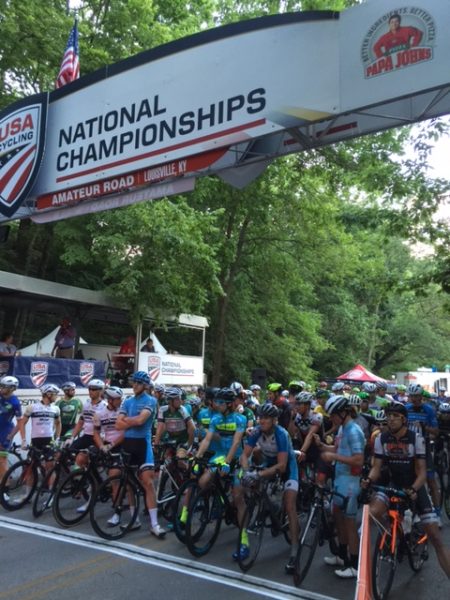 Everyone is super exciting at the 7 am start. 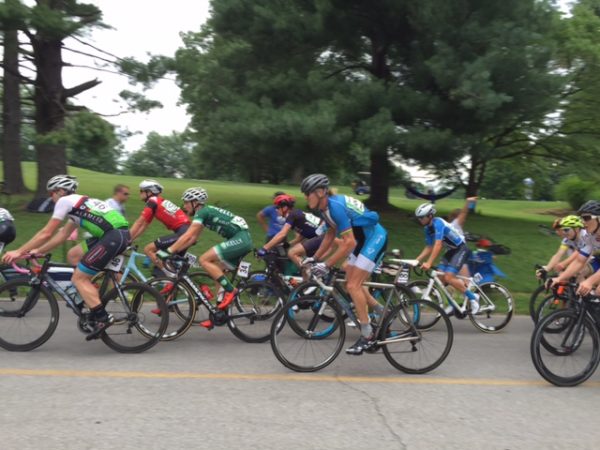 I had no power seated, so I climbed everything standing. 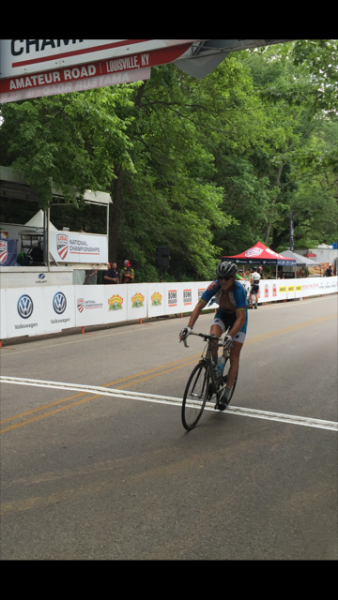 Crossing the finish line. Notice the crowds. The finish was at a really weird place, nearly inaccessible to get to. 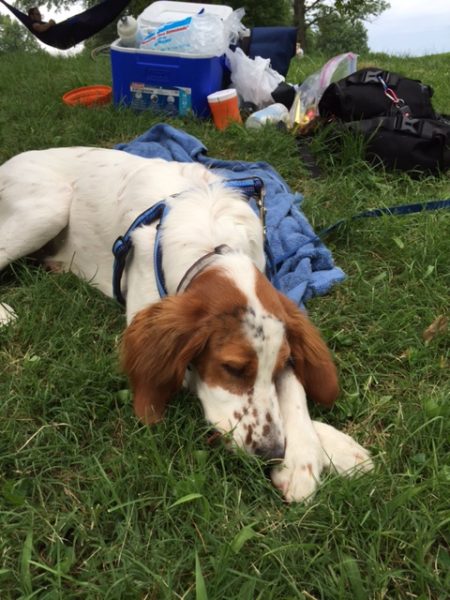 Tucker was done after the race. He got grease on his head once again.