The Tour of Lawrence Street Sprints were last night in Lawrence. It’s not something that I’m very good at. Especially right now. Don’t get me wrong, I sprint okay, just, but starting from a standing start with a screwed up shoulder, under the weather doesn’t make for a stellar showing. That’s okay, even when I’m going good I suck at it pretty much.

So, I rode a few rounds and out. I rode the first two times against Brian Jensen, my TradeWind Energy team mate. We didn’t really race, but didn’t completely sandbag it. I thought it was really weird because Brian beat me by about a wheel the first time and he had a max wattage of nearly 1400 and I was at 868. It must of been the initial pedal strokes.

It was good seeing a bunch of guys from out of town. Brad Huff, Jelly Belly, won the event over Colton Jarish, Think, and my old team mate, Ben Stover, Velotek. Those three take the event semi-seriously, so it is good they all made it to the podium. The points for the overall are pretty even, weighed more heavily for the circuit race and a little less for the criterium, so it should be tight. Brad can climb when he wants to, but you never know.

The circuit race tomorrow is going to be harder than usual. Just pretty much up and down Mt. Oread. They took all the middle flattish section out of the race because of road construction. It is going to be an enormous amount of climbing in 50 miles. I’m guessing 8000 feet. That might be too high, but not by much.

I have no idea how I’m going to race. I felt better yesterday on my 11 mile morning ride. I did eat a full dinner in Lawrence after the sprints and it stayed down, which was a positive sign. I’m not usually a guy that just pops right back from sickness quickly, but I can always hope.

The Tour de France starts today. Live video already up. I hate guessing winners on stage races, before the race. They are so unpredictable, which make predicting them so hard and mainly lucky. Froome is obviously the favorite, but I guess I’m going with Cadel. It is really hard picking Cadel after he rode the Giro, but I’m doing it anyway. He is like a diesel engine and stays out of trouble. Foome is so frail that if he has the least bit of bad luck I think he’ll break. And there always seems to be bad luck in the Tour these days.

Okay, enjoy the day and the Tour stage. I don’t race until 4:30 this afternoon, so I have another half a day to recover some. 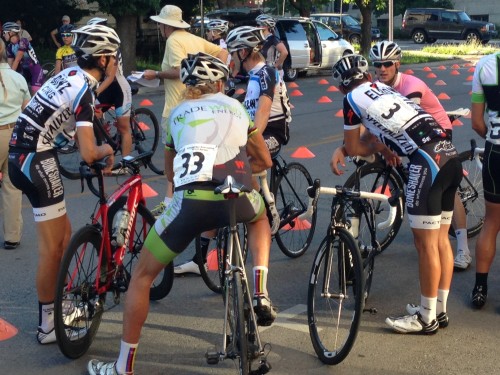 Catching up before the start with Nick Torraca, Joseph Schmalz, and Coltan Jarish (in the pink leaders jersey). 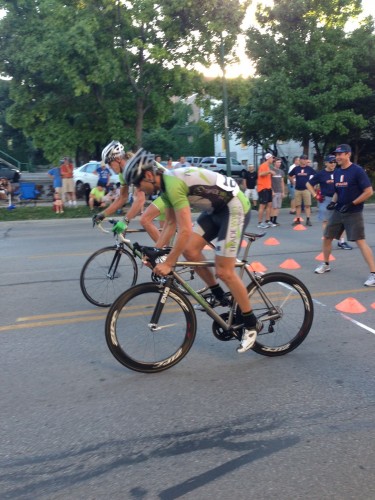 Brian and I in the 1st round. He cheated and was riding on his drops. 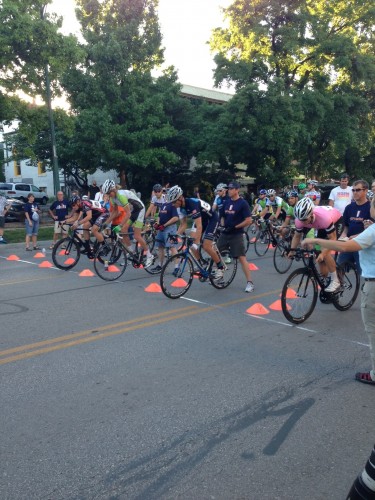 About ready to get put out by Colton, in the pink. 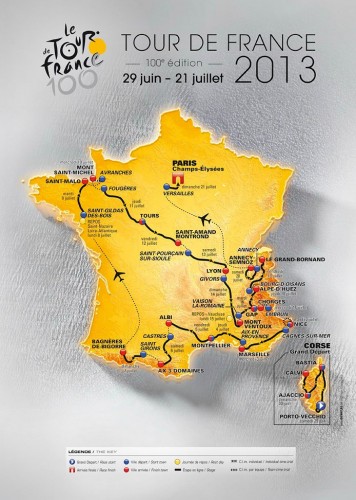 One thought on “Street Sprints ToL”