Yesterday was a blur. I packed up and flew out to California late in the afternoon. Sue picked me up at the airport and we’re driving to Jimmy Macs, editor of Mountain Bike Action, today, for the Mike Nosco Memorial Rideup in Newbury Park.

I haven’t flown for a little while. I really like the people watching at the airport. This girl checked in and I had to take a photo of her because her carry-on was a loaf of white bread. Plus, in her wallet, she had a get-out-of-jail-free card from the game of Monopoly in the front. Then, circumstances had it, but I ended up sitting right next to her on the flight from Kansas City to Denver. How weird is that? She said that she couldn’t crush the bread because it was for a school project. I’m not sure what she is going to school for, but as far as I remember, I never needed a loaf of bread for anything school related. And she told me that she hadn’t ever had a chance to use the card yet. I wished her luck with that, if it happened.

Going through security, for some mystical reason, I happened to have a Swiss Army Knife in my backpack. I say this because I vividly remember taking it out of my backpack and putting it in the pocket of my checked luggage. The TSA lady gave me the knife back and I went outside and buried it by a tree across the street from the gate. There is a 63% chance that I’ll remember to get it next time I’m there.

Anyway, that’s about it from here so far. It will be good to catch up with Jimmy. I about only see him once a year now. That seems wrong. Okay, better get going. I need to spend some time on Mac’s pump track tonight. 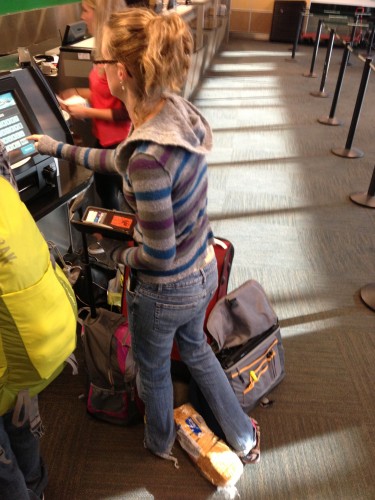 Here is the girl checking in. If you carefully look, you can see her Monopoly card in her wallet. (I wasn’t really spying.) 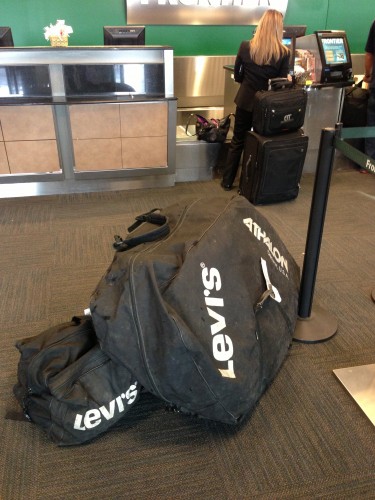 I’ve been mainly using the same bags since the Levis days. These are close to 30 decades old. 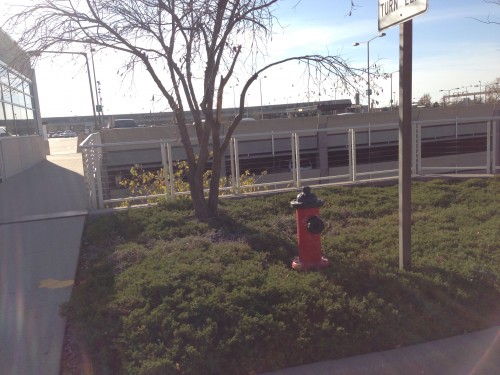 The spot where the knife is buried.