Most of the guys from my TradeWind Energy/Eriksen Cycles team, 4 of us, are riding from my house this morning. It’s the first time I’ve really trained with most of them, other than Bill, this year. That seems weird. Anyway, we’re going out for 4-5 hours at 100 +, whatever, degrees. Brian has been over in Denmark, where it was in the 60’s. So, he’s not good with the heat, plus he’s jet lagged. Should help make it an even playing field then.

Yesterday we rode over to the Kansas State Games Time Trial. My friend, Jeff Unruh, is promoting the cycling portion of the State Games. The TT was yesterday, then criterium is today and then the road race on Sunday. The bikes at the TT were off the chart expensive. And, I didn’t know 90% of the riders. I’m not sure why we don’t ride them. I guess it’s more for the citizen racers or something.

That isn’t the case with horseshoes. I went over to the horseshoe competition a couple years ago and thought I might do it. Boy, am I glad I just watched. Everyone, over and over again, ringer after ringer. These 80 year old guys, that were moving slower than molasses, would release the horseshoe and nearly always throw a ringer. I hope those are the best horseshoe players (is that the right vernacular) we have here, because if there are better guys, it’s not even a game because they’d never miss.

I had kicked around flying over to Paris for the last two days of the Tour with Trudi, then staying the week and watching the Olympic Road Race the next weekend. I have a friend in London that has a house on the course and she is having a party. Somehow it doesn’t seem like the right time to go over to Europe and just hang for more than a week. I’m thinking the BMC after race party might be a little more subdued this year and I’m not all that big on watching bike races in person. Especially one that “the experts” think is going to end up in a field sprint. Anyway, I’m not sure why, but we never got our shit together, so we’re still in Kansas. Not nearly the same, but, not bad either.

I bought a bag of ice at the store for the ride today. I can’t believe how much ice we’re going through riding nowadays. That isn’t how it used to be. Back during the Coor’s Classic days, I’m not sure we even had cold bottles. Actually, I’m pretty positive we didn’t. Now I only ride with thermal bottles that are stuffed full of ice. A normal bottle full of 1/2 strength, warmish Coke, sounds pretty terrible now. Funny how you get used to being pampered.

Okay, I have to get ready. I’ve been eating a ton more protein recently. Mainly some beef every few days and lots of eggs. I’m not sure exactly why I started that, but I have. Kind of seems to be working, at least for training. This is going to be an effort today. 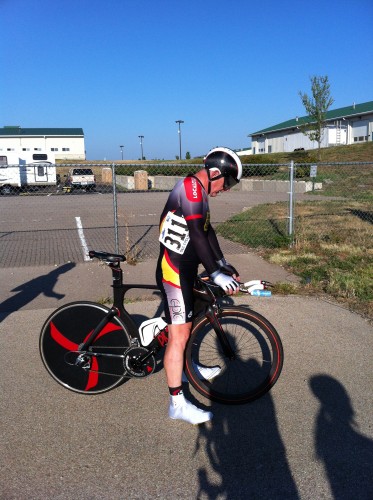 I’m not even sure what most of this guys equipment is, but it looks expensive. 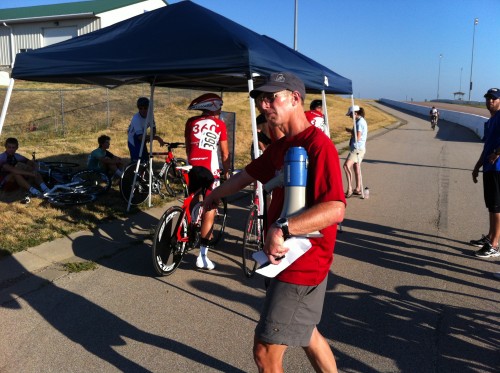 Jeff Unruh, the czar of the cycling portion of the Sunflower State Games lining up the riders, with a bullhorn as backup. 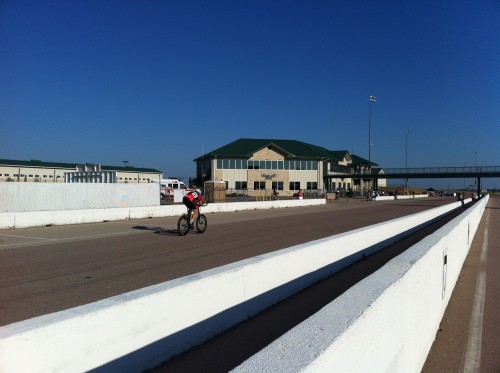 The TT was at the Hearland Park race track. I would have hated riding a TT there. 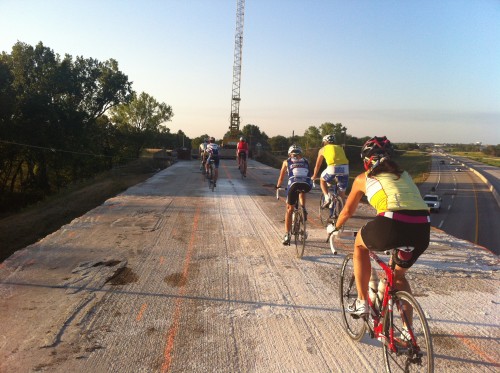 They are doing construction everywhere around Topeka. It’s hard to get in or out of town nowadays. This is probably the last day were could ride over this bridge over the Turnpike. It was kind of scary, with no sides, even though it is two lanes wide.