I haven’t ever went back and addressed a post I’ve done before, but the domestiques post from a few weeks back seems to need some attention. My attention, because obviously I didn’t make my points clear. Or maybe I made my points, but people just picked up on what was important to them, I don’t know.

Our domestic professional scene here in the US is pitiful. Rarely does a US based professional ever compete in a race that is over 5 days. It is not European stage racing. Not even close. So the need for a bunch of super domestiques on US Professional/Club teams is not needed. With over half the riders of domestic pro team having to be under 27, per UCI rules, then the teams end up having a bunch of young guys that end up working for the older, usually foreign, more experienced riders.

If I had domestiques working for me, here in the US, I say the most important thing he could do for me is go back to the team car and get bottles. And that is something that has only become common in the last two decades. And I don’t understand the need for it. It is dangerous, lazy, there are feed zones to get bottles, it is just another reason for the team director to justify his existence. Other than that, in US races, I’d just as well have my domestiques up the road, watching and learning the racing tactics, trying to win the race and win prize money.

I wrote earlier that I don’t understand the domestique mentality. And kept getting slammed for it. I still don’t. Sorry. Like I wrote in the comments section of the previous post, cycling tends to draw individuals that aren’t drawn to the normal American team type sports. That is one of the best aspects of the sport. So, trying to mold an individual thinking athlete into a domestique is going against the grain. The comments kept comparing baseball players and I think that is a good analogy. But my analogy would be that a domestique is closer to being a fielder that never gets to bat the whole season.

And just because I don’t understand the mentality doesn’t mean I don’t respect what they do. I do. It is very hard. And it is usually a thankless job. Sure, the BMC guys riding for Cadel got a lot of satisfaction from their work the previous 3 weeks. But, how about the Schleck’s guys. How about the workers for Katusha? Best cycling moment for them? Not even close. And the Tour is just one month of bike racing. The season is nearly 12 months long, with a domestique riding way more race days than the team leaders now.

So, if America is the “feeder league” for the European pro circuit, that most everyone states it is, then we should try to produce smart, strong bike racers that have all the goods to advance to the next level. Not just a bunch of guys that know how to ride at the front, set tempo and fetch bottles. 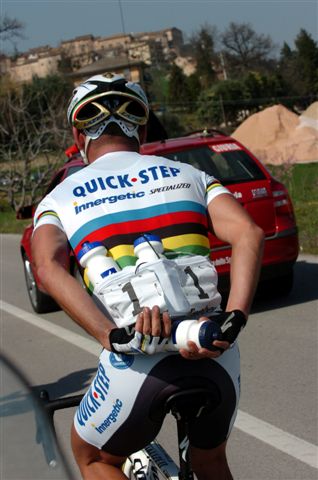 Even Bettini (not Boonen) has domestique duties every once in a while. We all know how to do it, let's just not aspire to it.