I’m not sure what happened a few hours ago at the Gateway UCI race. I wasn’t going that bad, but finished pretty horrible. I have an idea of what was wrong, but I’ll never know. I’m not sure I’m that recovered from Chequamegon, plus the 10 hour drive back Monday and standing on my feet most of Tuesday assembling bikes. That’s the best I’m going to come up with.

I finished more than 5 minutes behind Jeremy Powers, the winner, but that wasn’t reflective of how bad I was going. Or how good, depending on how you look at it. I lost more than a minute the last couple laps, riding easy and collecting 1 dollar bills that were scattered about the course. I was consistently losing about 25 seconds every lap. I’d guess that was about 1/2 from shitty bike handling and 1/2 from lack of power.

Like I said above, I felt pretty okay riding. I had two problems. Actually three. I wasn’t having a good vision day. I’m not sure if that is because of this eye infection thing I have going on or just because I’m not seeing that great nowadays, but it was a problem, which exacerbated bad bike handling. Problems 2 and 3 were maybe only one problem. I had a bad side stitch and my lower back was seized. I don’t know if one of those things brought on the other or not, but it was pretty uncomfortable. They both kind of went away with about 10 minutes to go, but by then it was too late.

I rode 10 miles back to the hotel at midnight, through the St. Louis neighborhoods. I love it. It felt good riding back, loosening up my legs. It started raining with a few miles to go. It was the best part of the whole evening by far.

It is now 2 am and I’m not even close to sleepy. I entered the USGP races up in Madison this weekend. The registration closed at 9 pm, the start time of the race last night, so I just went ahead and did it. I wasn’t really planning on driving up to Madison, but since racing bikes is what I do, I really didn’t have much of a choice. I’m glad there are more than 30 riders up in Madison racing. It will give me a higher chance of beating more guys.

So, later this morning, a few hours from now, Trudi and I are going to drive up to Mt. Prospect, a suburb of Chicago, and stay a night with her mom. Then maybe go up to Delavan, by Lake Geneva on Friday and head over to Madison on Saturday morning. Hopefully I’ll be better by Saturday and it won’t be such a shock to my system. I definitely wasn’t ready for that exertion tonight.

Here are the results from Cyclingnews.com.

And here’s a link to a video from the race showing me collecting some $$$ the last lap. It was a pretty crazy atmosphere, as cross usually is. 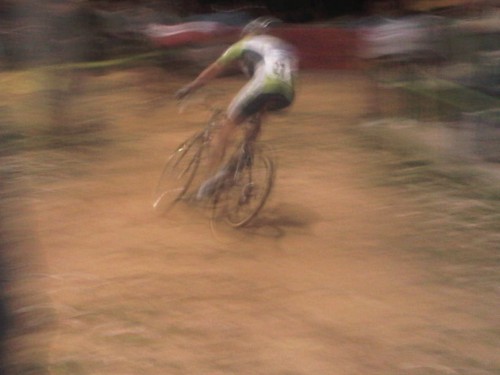 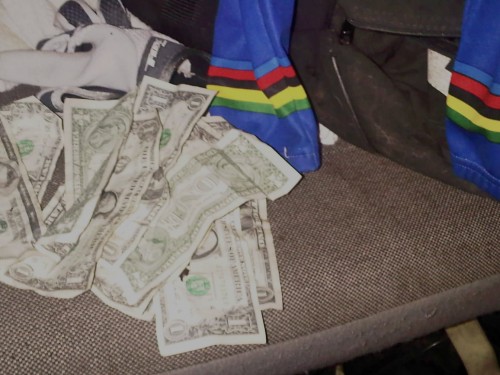 My pile of cash from the last couple laps, $14. 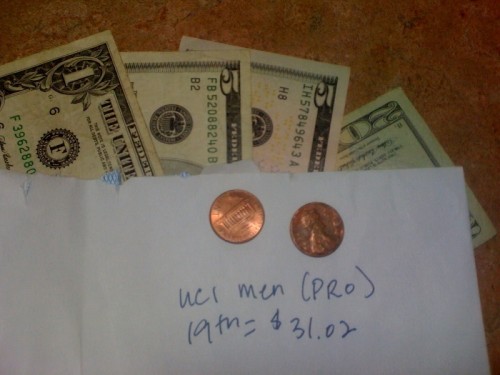 Prize money for 19th. If I add the $14 I picked up during the race, I made total 2 cents more than $45 entry. Can you believe they actually put the 2 pennies in the envelope?

7 thoughts on “Gateway Cup (was empty for me)”