Yesterday, Bill, Keith and I rode the complete Chequamegon course from Fish Hatchery to Telemark. I’ve been feeling kind of weird. Like I’m coming down with Ned’s cold, but it never gets worse. I never really got going too good, but was never really winded.

The course seemed really bumpy. Of course, it is going to be somewhat bumpy since it is a MTB race, but if you’ve done Chequamegon before, you know that it isn’t a typical MTB race. Of the 40 mile distance, only 10 miles or so are on the Birkie Trail, which is a singletrack down the middle of a nordic ski trail. The rest is either on gravel roads, logging roads and/or double track snow mobile trail. They are dumping a lot of gravel on the roads this year. It is definitely slower than years past.

That being said, Bill and I rode it in about 2:19, which seemed pretty fast to me. We were missing the first 3 miles or so from Hayward to Fish Hatchery, but that is a pretty fast time. Gary has already moved the Chequamegon office over to the hut at Telemark, so it was nice seeing him and Trish.

I have to drive to Duluth and pick Trudi up at the airport this afternoon. She drove a BMC car to Detroit after the World Cup in Montreal and now is flying to Duluth. That’s it for the season for her. I know it seems early, but when it starts January 1 and is non stop until the middle of September, it is long. So, 3 months off and it starts all over again. It’s kind of crazy.

I’m not sure what we’re doing for a ride today. My legs are good, just this lingering cold/head ache thing. It’s only 39 degrees and wet out now, so maybe we’ll wait until after Duluth. 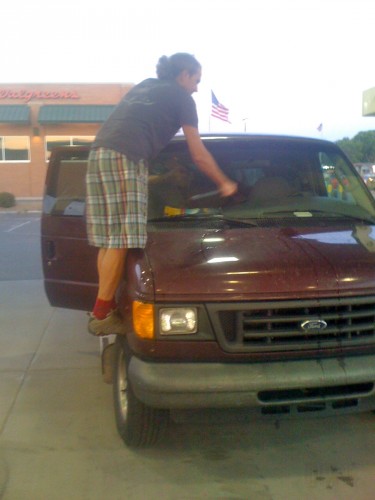 Keith doesn't usually make the trip up this early. Here he is making sure the windshield is spotless. 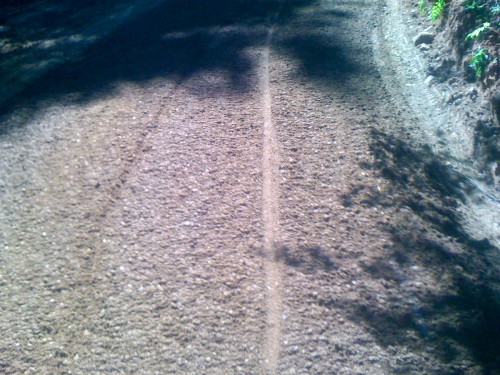 They were pouring new gravel on the first snow mobile trail coming off the Birkie for the first time. It was like dry, wet concrete. It is going to be a really slow, hard part of the race. 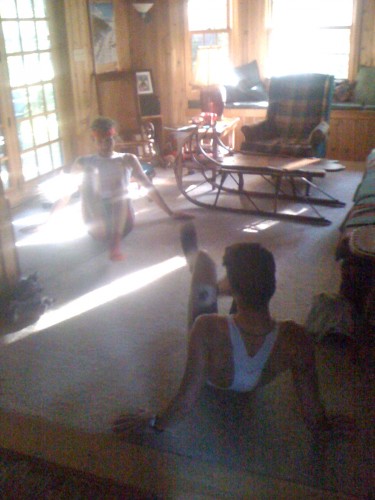 Here is Keith and Bill doing some sort of core exercises after the ride yesterday. I didn't have the energy or motivation to participate.