Yesterday I had it. It was raining most of the day and the 6 o’clock ride was rained out, but that didn’t stop me from going out for an hour and riding at 7. It was great. I like riding my bike. I’d rather ride than eat. Humans are strange. I was amazed how few cars there were out on the road, even though it wasn’t storming anymore. Everyone was hunkered down in the houses just because it had rained earlier. The better for me. It was perfect, around 75 with a little spray coming off the road. No wind.

Anyway, there is something about a new bike that makes you seem special. Everyone gets it. Everyone that gets it, gets it at least. The pedals were going over pretty effortlessly. Probably more due to the coolness/windless conditions, than the bike, but who cares. It seems like it has almost turned fall instantly. I’m not sure if it is the big drop of temperatures, or that the corn is starting to turn brown, but for some reason it seems like fall is approaching. Anyway, there were lots of colors on the western horizon and I just rode.

Today I’m loading up and going up to Des Moines Iowa to race a criterium at 5pm. It is a 3 fold mission. #1, I’d like to race this weekend. #2, Bromont hasn’t had his summer romp up in Cable this year and it is about time to go up there for a couple days and ride my MTB bike and let him run around in the woods. And #3, the Iowa State Fair is in Des Moines and it is awesome. I think it should be a mandatory, yearly, life experience to attend a state fair. Preferably in the midwest, in a healthy agricultural state, such as Iowa or Wisconsin. Both those fairs are not to be missed.

I think we’re going to skip the fair on Sunday and drive straight up to Cable and catch it on the way back, probably Wednesday, when the crowds are a little thinner. I tried to get a hotel room up in Des Moines for tonight and they are pretty booked up full.

After all those comments about Schleck’s bike, I hope I can make it mine. It doesn’t seem to not want to corner fast. And it rides prefect no handed. I think that is one thing super important about a bike. You should be able to ride it no handed easily. Sitting too far forward or hanging off the back of your seat, off balanced, it shouldn’t matter. No speed wobble, it should want to track straight. This one does. At least just riding. I’ll have to hope I get the chance to test it at race speed sometime soon. That would break the curse if there is one to start with. Anyway, I like the frame a lot, I think we’ll get along great. 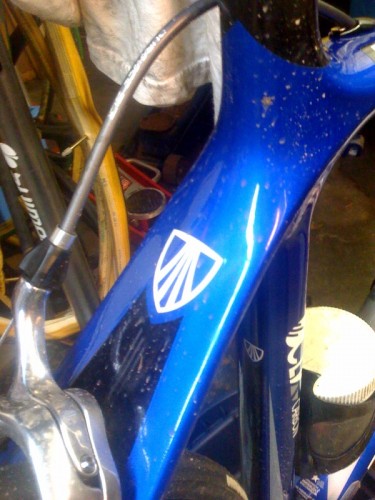 I had to ride it on some wet gravel and get some road spray, just to let it know what was in store for its future. It didn't seem to mind one bit.