This weekend was “one of those”. The last two races went badly. Saturday, I don’t really have any excuses. I had to make a few too many efforts to try to hold my position the last couple laps and was just done when it came to the end. I ended up 26th even though I didn’t sprint and let 5-10 guys go by me the last stretch. It is strange that I couldn’t judge how far up I was in the field. I would have guessed I finished in the 40’s.

Yesterday was a different story. It is the race I look forward to. A much harder race that weeds a bunch of the pack fodder out. It is just a couple minute lap with a pretty hard, big ring, climb that is lined with crazy, drunk, fans.

Brian, Bill, Catherine and I went for an hour ride in the morning on the bike paths. Tulsa has a super nice trail system. Perfect for spinning the legs out from the night before. While Catherine decided that coughing all night wouldn’t work out too well for her race, Brian made a decision to ride the 1-2 race before the Pro race. He is undefeated on the Riverview course. He has won the Pro race twice and the 1-2 once. It was over $1000 to win, plus primes. Anyway, he kept his streak alive, easily. With 8 laps to go, he jumped for a $200 prime and never looked back. He had 30 seconds after a couple laps and cruised to a win. He quickly changed jerseys and lined up next to me 5 minutes later for the Pro race. That was going to be close to 3 hours of racing, at 98 degrees, on a super hard course. I didn’t expect to see him much.

I was surprisingly good. I felt like shit the first few laps, but wanted to stay near the front. The field gets so clogged up on the climb each lap that the back half nearly has to come to a complete stop each time up. You have to make up that “rest” somewhere and that is not a good situation to be in. If you would have asked me after 6 laps if I would finished I would have said no. But, then I came around.

The problem was that the race was too easy. We never got going hard. It was hot. Really hot. I was taking a bottle of ice water from Trudi every few laps, plus Catherine was throwing a ton of water. There was water everywhere, with hoses and spraying. I seem to be doing better this year in the heat. Maybe it is premature to be saying that, but the last two races, it has been in the mid 90’s at least, and I don’t seem to be any worse off that anyone else.

The Cry Baby Hill is the highlight of the race. It is always great to be racing through a tunnel of crazed fans. The energy drives you. I felt the best on the climb. At least compared to everyone else. I had a couple places I could move up a ton on the course, much like Friday night, so I didn’t really worry too much about position. Anytime I rode on the left side of the field, some super fan kept yelling my name and wacking me right on my left hip where I fell on Friday. It stung for nearly a half a lap each time. After 3 or 4 times I never rode up the hill on the left again.

I’m not sure what Jelly Belly and Fly V were doing. It seemed like JB wanted to control the race for a field sprint for Ken Hanson. I don’t know what Fly V’s plan was. But when Alejandro Borrajo, Jamis, and Juan Pablo Dotti, AeroCat, rode away, it didn’t seem like they had the least interest in bringing them back. I guess that showed that they just couldn’t. If you look at the results, there is only one Jelly Belly rider and one Fly V guy ahead of me, at 32nd. So, they must have been completely done. Whatever the reason, they lost the race. The day and the overall. Sprinting for 3rd wasn’t going to do it for them. It seems like they had enough guys between them to a much better job than that. But, that is bike racing.

Like I said, I was good. I had the last lap planned out in my mind. But, it wasn’t to be. Coming through the final corner with one lap to go, I was moving up to the top 10 on the outside and some guy, (I don’t know who, but if anyone else does, please let me know) hit his pedal and rolled his rear tire. I was going wide and he slid on his rim straight to the outside curb and I had to come to a complete stop. I sprinted virtually the whole final lap. It was a lost cause. I caught back on just at the bottom of the climb, but guys were getting shelled right and left. Half way up the climb there was a huge pileup and I got held up again. I still got connected back on, but it was for nothing.

I don’t mind not having a good result. But, I really mind not being able to participate and see how it would have worked out. I just rode hard enough to participate a bit and never really got to see what I really had for the day, which made the day seem like a total waste. I had planned to punch it through the next to last right hand corner and just lead it down the hill from the front. I would have liked to see if was possible. I never got winded throughout the race. My jump is pretty iffy right now, but after I get up to speed, I am able to hold it. So, another disappointment.

Brian finished the race, which I’m positive he was the only guy to double up the two races. He got caught behind the crash on the final lap, so he wasn’t in position to have a good finish anyway.

I’m still a little sick, but am riding better. I kind of wish I was going up to Nature Valley which starts on Wednesday. It seems like I feel better when I am getting more back to back race days. But, that is happening. The Tour of Kansas City is in two weeks and then the Tour of Lawrence over July 4th. I might go up and do a few of the America Dairyland races before KC. Just depends of how I heal up from crashing and illness. It is weird that I didn’t think much at all about that when I was racing the last couple days, but now I’m all sore and my chest is tight. I guess that wasn’t a high priority when I’m racing, since it wasn’t anything I could control at the time. Race day mentality and week day mentality are so far apart. 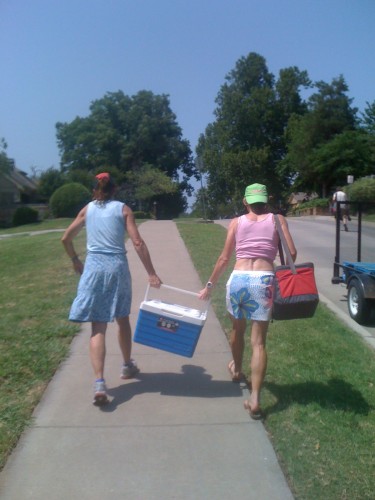 Trudi and Catherine lunging the coolers of ice and water up to the hill. 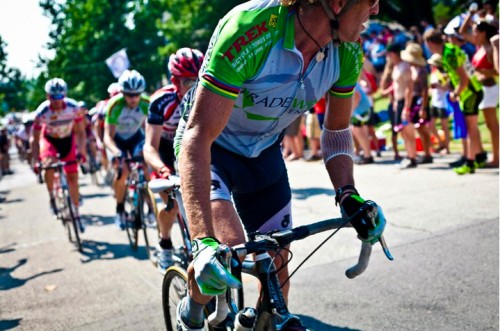 Climbing Cry Baby Hill, not sure why I'm looking back here. Photo from Biff Stephens. 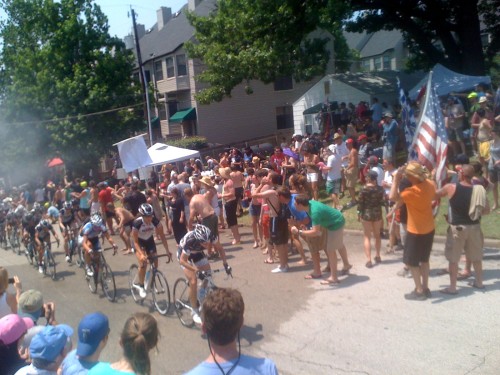 The woman's race had a good amount of fans too. 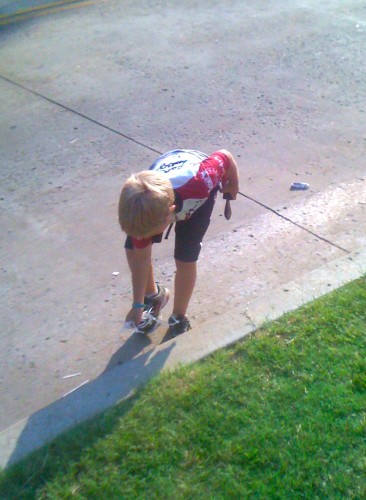 I saw this little guy, in a Tulsa Tough jersey, collecting up the cut zip ties from the banners. Pretty cool.

2 thoughts on “Tulsa Tough- Over and Out”