Yesterday I did the benefit ride for Andreas Knickman. Other than it being nearly 100 degrees, it was wonderful. Definitely a life experience. The collection of people and the riding made a great day. I’ve ridden a ton in Southern California, but had never riden the climbs up into the Santa Monica Mts. from the ocean. They are great. And absolutely no traffic. I am pretty sure that only one car passed me the whole day on any of the climbs. And the climbs where climbs. 5-9 miles longs. 2500 feet. I’ve heard the ride had something around 9000 feet of climbing total, but I can’t confirm that. All I know is that I didn’t want it to be any longer. I was starting to cramp the last half hour. And I wasn’t alone.

I’m staying with my buddy, Jimmy Mac, editor of Mt. Bike Action along with my longtime friend and team mate, Andy Hampsten. That has made the trip very enjoyable. I haven’t had an opportunity to spend quality time with either of these guys for a long time. I’ll make sure that isn’t the case after this.

Andy and I got up pretty late yesterday for the 9 am start. We stopped at a small hole-in-the wall Mexican grocery and had grabbed some breakfast burritos to go. We got to the ride 1/2 an hour before the start. I was kind of in a rush and it was weird because I was running around nervous, like I was doing a race. “I kept thinking to myself, calm down Steve, it’s just a ride.” Anyway, I got over to the start and was amazed how many riders showed up on a Wednesday. Maybe around 300. I dropped some money into the kitty and just then they took off. Not 100 meters from the start I had a flat. And no pump. I’d borrowed a floor pump and put nearly 100 psi into my tires at the start. I usually ride around with whatever pressure is in them. It was 60 psi. I figured with all the descending, I should probably have more pressure. Anyway, I guess my cheap Chinese tubes aren’t used to that, so they ripped open at a seam.

I was changing my tube and thinking that I had no idea where the ride went, when a couple stopped and asked me if I needed a floor pump. I did. They gave me a old Silca pump, which is the best floor pump ever made. I had no idea where the ride went and I was way behind, so I threw my bike into their van and they drove me a couple miles up the road until we caught the tail end of the group. I jumped out of the van and started chasing, because I knew I was a pretty far back of the front. I came over the top of a hill and there was a crazy descent. Switch backs, tight. I was riding my Eriksen cross bike and had cork pads in the front. I grabbed a bunch of front brake and got a ton of chatter. It occurred to me that this was only the start of the day and I probably wasn’t going to enjoy the descending in groups as much as I should.

I caught up a few miles down the road after chasing way too hard. Then the ride became super enjoyable. I had a chance to ride with Roy for a few miles and catch up. We started the first climb up Deer Creek and it was super steep. Roy said that the longest ride he’d done in a year was 40 miles and that he was going to be destroyed at the finish. I agreed with him. I climbed at a decent pace and there was a support stop at the top. It was super well supported. Cold bottled water, energy drink and stuff, coke, etc. Better than nearly any race I’ve done the past 5 years. I started riding in the front group from here on.

The front group was about 30 guys, + or – 10. Chris Horner, Dave Zabriskie, Andy, myself and a lot of pretty fit local guys. Mari Holden stayed up front all day too. She descend like a banshee.

The ride was super scenic. The view from the mountains was awesome. The little time we spent on the coast was cool. The surf was up so there were a ton of surfers dotting the ocean. Never not something to look at.

Anyway, the ride started getting pretty long. No one was really killin’ it at the front, but it usually got down to 10 by the top of the climbs. There was luckily a rest stop at nearly every top. It was hot. I’m not sure it was 100, but it was crazy hot climbing. Andy and I both were pretty happy to be back at the park without seizing up.

Afterward, there was a great outside buffet and silent auction fund raiser. We hung around and talked with friends for a couple hours, stopped by Trader Joe’s and bought some stuff for dinner and headed back to Mac’s to have salmon and too much wine.

Andy and I are going to take out a couple of the MTB test bikes from Jimmy’s garage out for a ride this morning. Andy is flying out of Santa Barbara this afternoon back to Boulder. I’m hanging out until early Monday out here. There are two UCI cross races on the weekend, but I’m up in the air about that…… 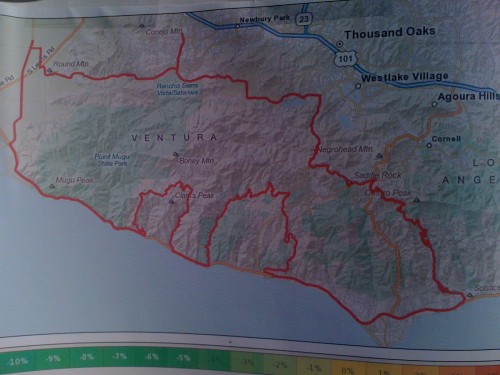 Chris provide alittle of assistance to Mari going up some of the climbs. 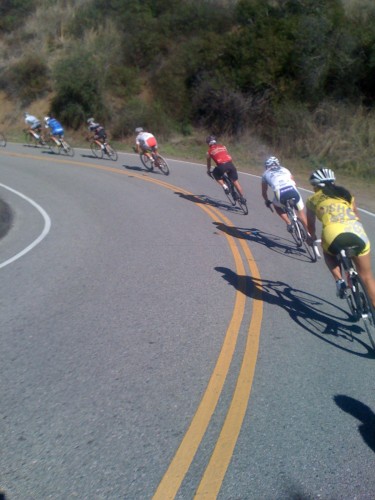 She held her own on the descents though. 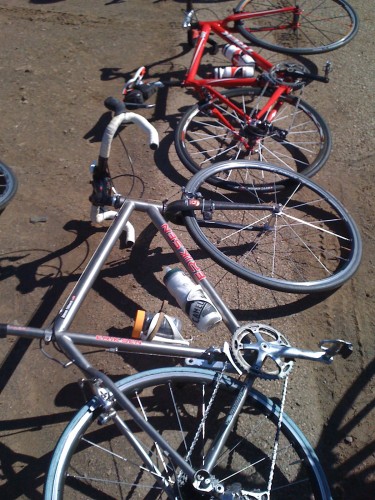 Two cross bikes on the ride, mine and Chris Horner's. He is doing the cross races in LA this weekend. 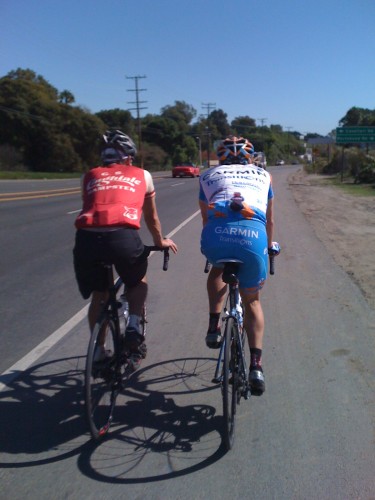 Andy and Dave Zabriskie riding along the coast. 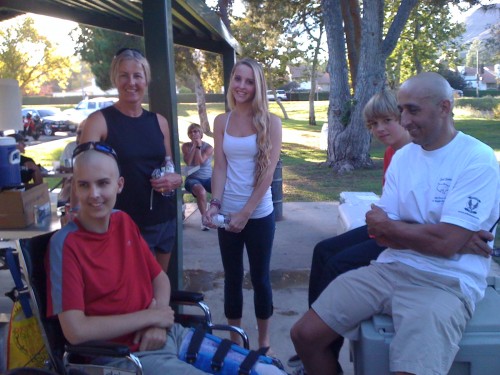 Roy's family after the ride. 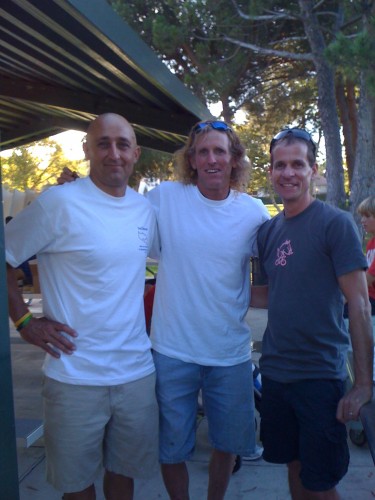 Roy's mom wanted a photo of Roy, Andy and I.