I like driving. I really like to drive. I like to drive fast on the open road. There is nothing like having a full tank of fuel, good music or podcast to listen to and a good cup of coffee. The drive from Topeka to Denver is pretty scenic. I think that Kansas gets a total bum rap because it doesn’t get really boring heading West until you are in Eastern Colorado. Originally, before Kansas became a state, the territory of Kansas stretched all the way to the front range. I’m glad we gave that back to Colorado. It is ugly. I hate Limon. At least along I-70. Mainly because it is the only civilization within a hour either way and they jack you for gas. And it’s ugly in my opinion. A surprise that I hadn’t heard anything about was that there was a meteor shower going on, so there were lots of opportunities to make wishes.

It was kind of strange because once we got a few hours away from Topeka, the radio station selection was great. There was a super NPR station that broadcast with 50000 watts for hours. Plus, there was a lot of different choices of classic rock or alternative music. But, once we crossed the Eastern Colorado border it was only religious stations and country western. Kind of ass backwards.

We’re staying in Arvada tonight and getting fence materials in the morning and heading up to Silverthorne. It has been snowing up there for the past couple days. Nothing like racing a MTB race in the mid 80’s and then a couple days later going up to the high country with a current temperature of 7 degrees. Here is a live web cam shot from Frisco. It is supposed to be in the 40’s by Thursday, so I hope all the snow is gone for a couple days by then.

Alright, it’s nearly 1:30 am Kansas time. Not that late for me, but I have a lot to do tomorrow. I’d better get some more aggressive tread on my MTB bike before I venture out to ride. 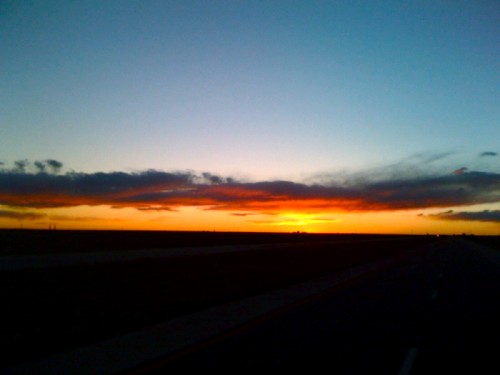 Western Kansas sunset on the way out to Denver.

One thought on “Got there….”