Yesterday, Cyclingnews wrote a article about one of the Polish brothers, that I posted about a couple days ago, tried to commit suicide. I felt pretty shitty. I was thinking, “is there even a remote chance he saw my posting and that affected his decision?” Almost impossible, but that was my first thought. The article went on to imply that it is understandable why they took EPO. Mainly citing that their father only makes 250 Euros a month and that they were going to make 10 X that amount with their new contracts.

That is what is so stupid about the whole doping thing. Justifying the actions. I feel bad that the guy was so shamed, embarrassed, depressed, whatever, that he thought it best to kill himself. But obviously, he only felt that way after he was caught for EPO. I received a comment about how the riders are always taking the blame for all the drug positives and that other factors come into play. These guys didn’t even have enough funds to afford a systematic drug program most likely. But, ultimately the riders are responsible for the end result. It’s their lives. Maybe you should think that if you’re doing something that is going to make you want to kill yourself if you get “caught” later, you shouldn’t be doing it in the first place. But, maybe you don’t know how you’ll feel until the situation arises. I don’t know. Anyway, he obviously knew he was doing something that was not right in the first place or he wouldn’t of reacted like he did. Enough said.

But, Valverde is much different. I’m torn with Valverde. Puerto almost seems old news. And I love the way the guy rides. I think that most modern day cyclists don’t have the complete package. Valverde does. I like that he sprints at the end of stages during Grand Tours. Climbs well and TT’s reasonably. But, I don’t think that he should of been racing bikes the last couple years. He should of done his “timeout” like Basso did and say he is sorry. I’m not sure what I think about the way the Italians got his blood from Puerto and matched it with his blood from the Tour. But, his blood is his blood. And the blood in the bag had EPO in it, so he wasn’t keepin’ it around just in case he was in an auto accident. So, he needs a timeout and sit in the corner for awhile.

I very much doubt that Alejandro Valverde is going to be so remorseful that he will try to commit suicide because of all these accusations. But, like I said, you never know how you react until you’re in the siutuation. Let’s hope not. He’ll most likely get an international ban from the UCI, train for a couple years and come back like Basso and be stronger than ever.

The biggest loser here might be Contador. He’s not going to have Alejandro and his Caisse d’Epargne Team around to set tempo for him in all the big races when Astana isn’t strong enough to do so. 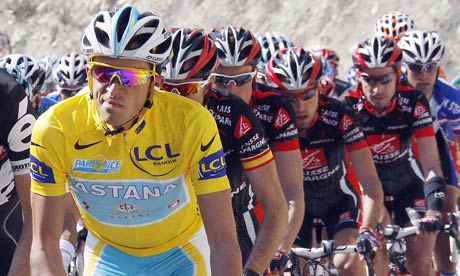 Or Contador pulling around the Caisse d'Epargne Team.